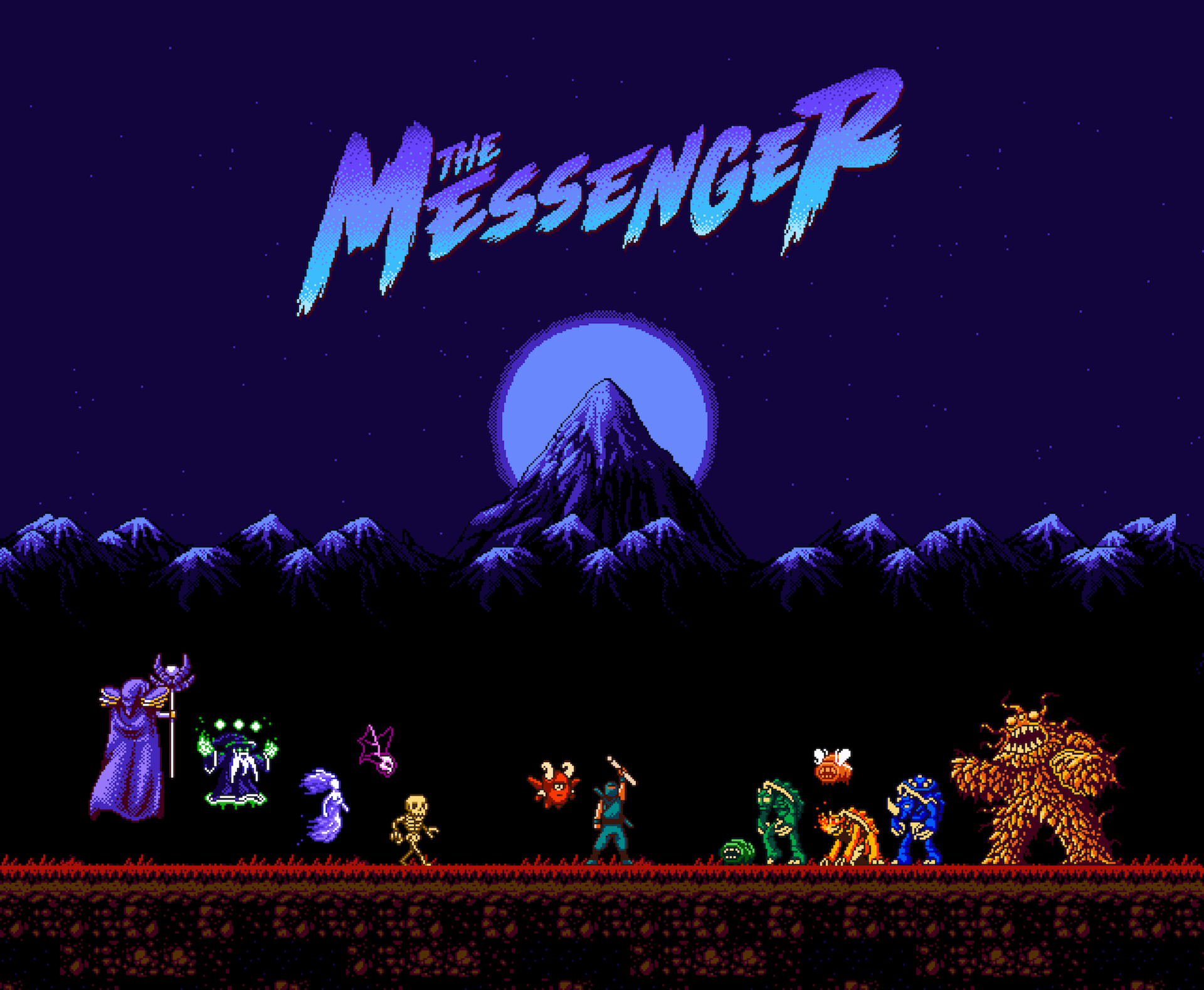 GAME REVIEW | One Impressive Delivery Via "The Messenger"

It takes a lot for a video game to truly wow its audience. Some go for over-the-top violence, others showcase a heart-wrenching story usually reserved for Oscar-winning movies. In the case of Sabotage's The Messenger, the way it wows gamers is not just by its retro looks, but rather demonstrates the strengths of its mind and heart. This results in a game that not only feels like a classic 8-bit/16-bit platformers, but demonstrates how a style so old can feel unique once again.

The Messenger has a somewhat paint-by-numbers sort of tale to showcase. A lone ninja is sent on a quest to deliver a scroll way up high in the mountains, one that may assist with defeating the leader of the demon army. Along the way, the ninja learns new tricks and faces off against deadly foes that will keep him from reaching his goal. With each new area he discovers is another new eye-opening revelation about the world he lives in, and when given the chance to truly see what's beyond the mountains, his quest to defeat the demon army leader becomes all the more important. 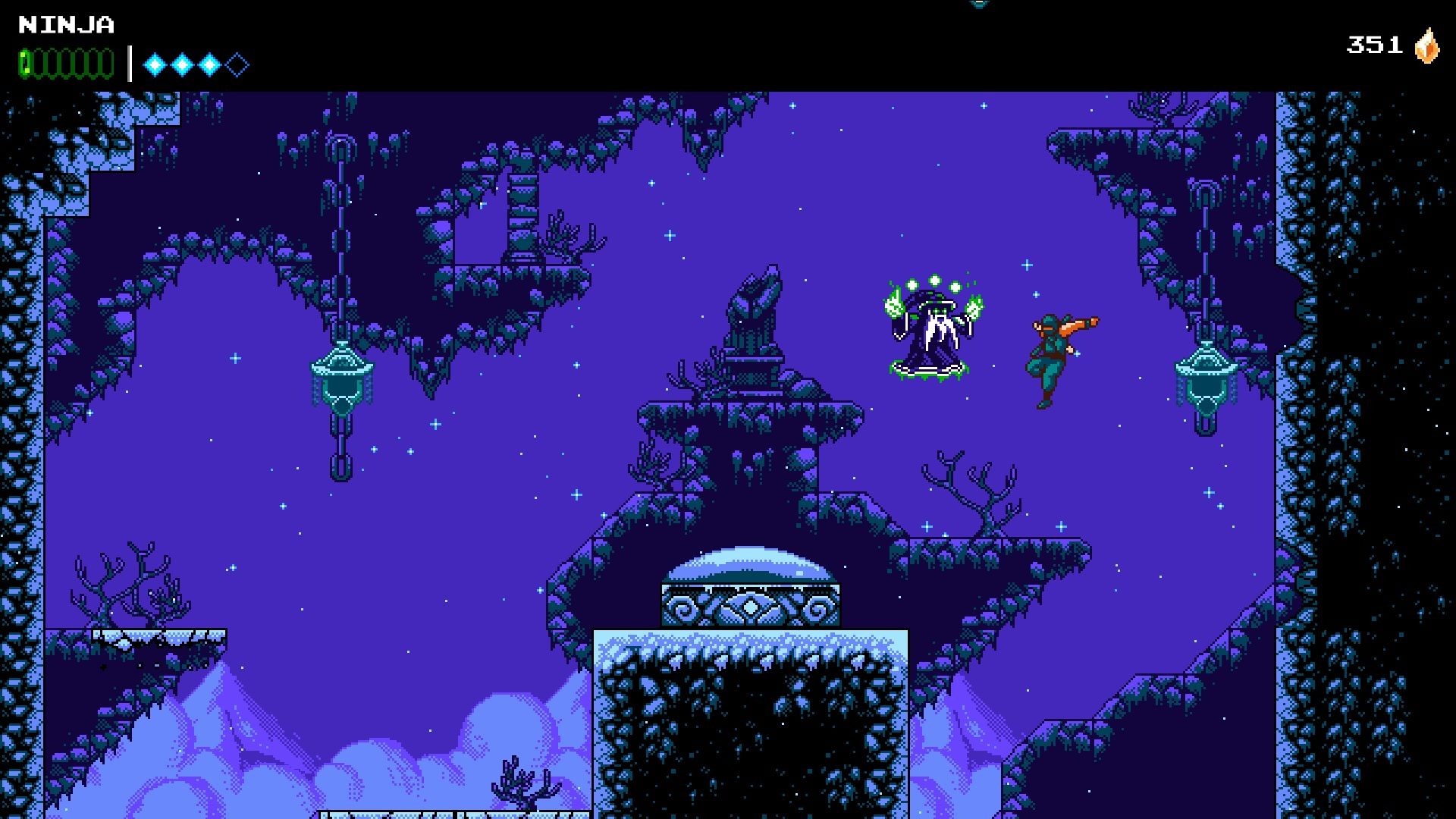 Very much in the vein of Ninja Gaiden, our hero will come across many a tough monster that he'll have to eliminate with his blades and shuriken. When new weapons and abilities become open to him, our hero will find hidden areas, secrets, and various other goodies that will aid in his quest to rid the world of evil. It's during the boss battles when the ninja must demonstrate his newfound skills and knowledge, as one learns how to read patterns and wait for that precise moment to unleash their fury.

As such, these new skills will be given when the time is right. Items like wall-climbing claws and grappling hooks will be handed to you, but other skills and power-ups will need to be purchased with the credits you earn throughout the levels. Upping one's health, bettering the power of their attacks, and even bettering their defenses can be unlocked in the ninja's skill tree with the right amount of money. And where you get these new skills lies with the Shopkeeper. 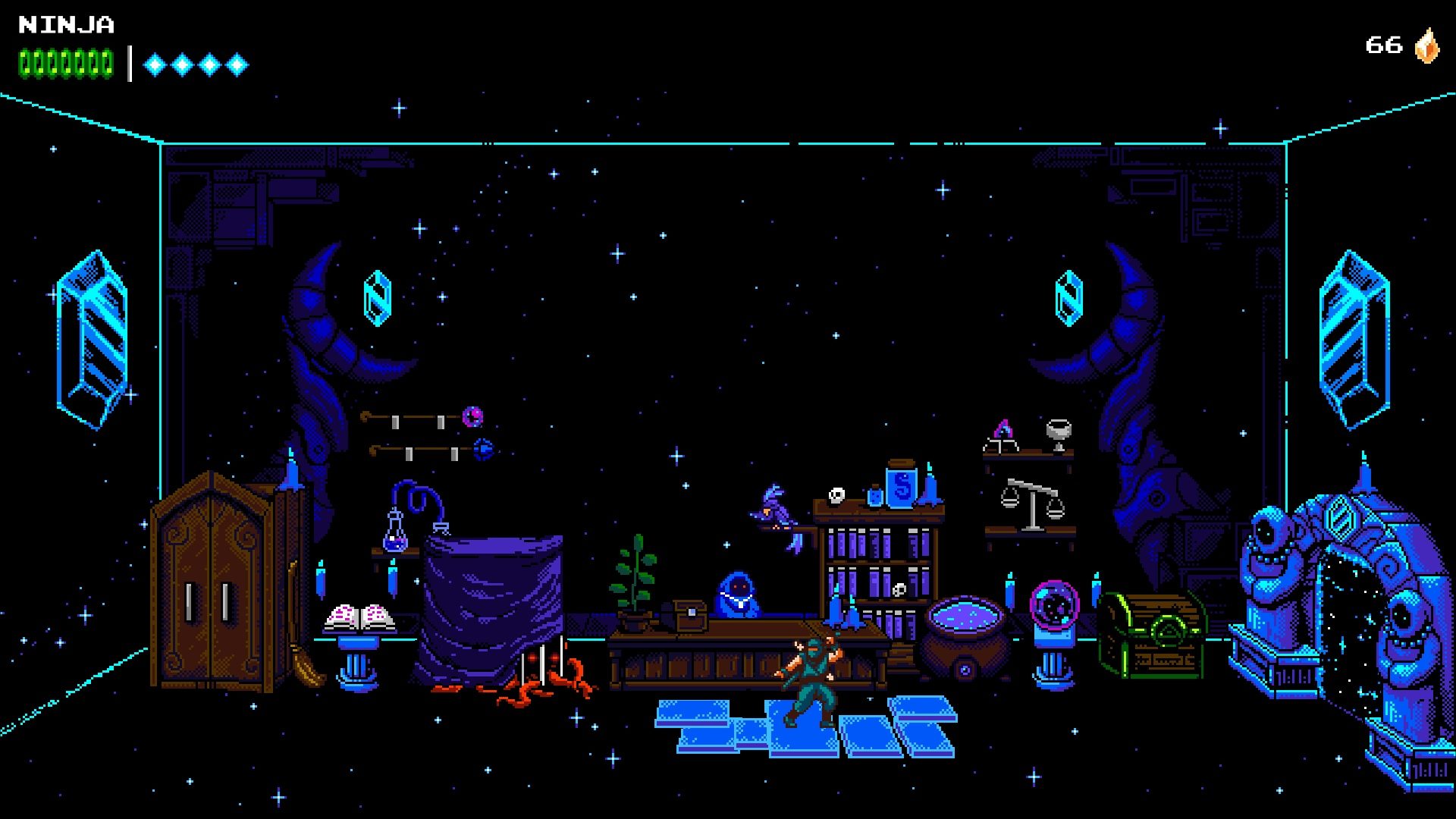 Out of all the characters in The Messenger, no one shines as bright as this cloaked man about talent. He'll tell you stories, inform you of what's ahead, and -- in some cases -- mock you for your arrogance and impatience. (Try opening his closet, and you'll get quite the fist-shaking from the guy.) It's a character like this that not only makes the gameplay experience more memorable, but also demonstrates one of the most unexpected strengths of the game: its well-rounded humor.

I walked into The Messenger thinking it would be just your average retro platformer. Instead, I was greeted with some of the funniest bantering I've experienced in any game that's come out this year. Whether the ninja is arguing with the Shopkeeper, the level bosses, or even his own allies, what comes out of their mouths will surely make you chuckle with delight. One of the best reveals comes in the form of what the scroll is, as it is one of those moments that will make you whack yourself in the head and wonder, "Why didn't he look at it sooner?!" 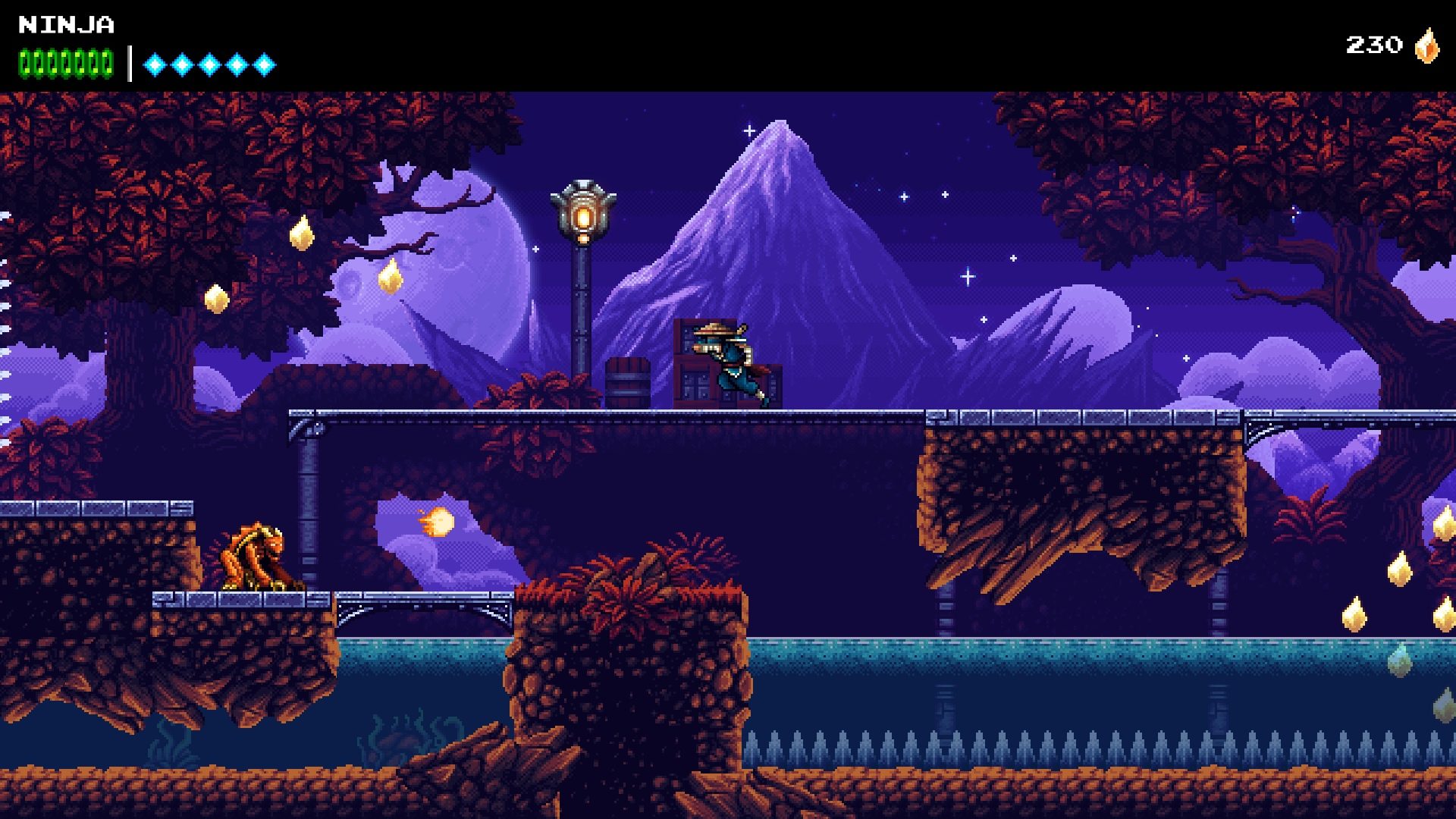 Of course, a video game just can't be funny; it also has to play well. What Sabotage Studios delivers here is a game very much in the era of NES/SNES platformers. Where the challenge lies is how one should time their moves in the riskiest of areas. Places can be crawling with baddies, spikes, buzzsaws, and various other knickknacks that will slice you into sushi. Die, and you'll come back with the aid of a demon who'll take some of your dough until he's satisfied.

This is where The Messenger showcases its strong gameplay mechanics. Yes, some of these areas can be outright hard to get through, especially when trying to collect those mysterious green medallions to unlock that hidden surprise. But what makes this game stand out is that it never feels frustrating to lose. Instead, every wrong step or leap taken is another learning experience, one that will bring you closer to your goal each time. 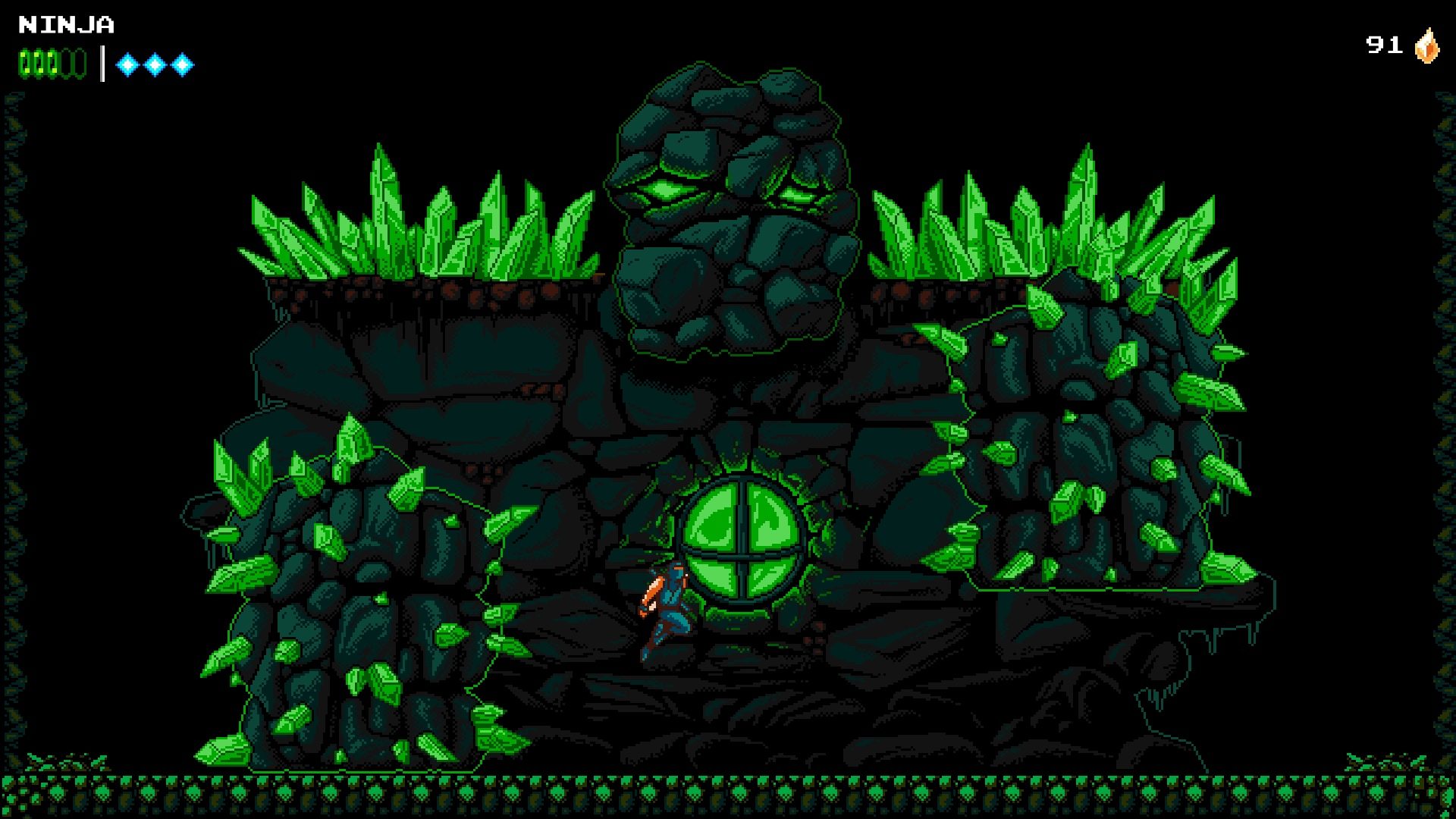 The boss battles are where the challenges are the most apparent. From battling a demon guard to a leaf monster, the skills you learn throughout the levels will be taken to a higher step as you tackle the strongest of beasts throughout the land. Timing your swipes, jumps, and ducks will take some practice with each boss battle you face, as each time you die will lead to a new discovery of how to land that final blow to finally take them down.

It's fortunate that the control system is very easy to learn, with the button layout feeling very much akin to the Super Nintendo way to control platformers. Swiping, throwing, jumping, and learning cool combos to take on multiple hazards and enemies can be learned very quickly without any overlap. Although there's a great setup with the controls, it can get a little irksome when the map button is initiated. There were a couple times during an intense jumping spree where I accidentally pressed the map button, causing me to lose my concentration and plummet to my death. 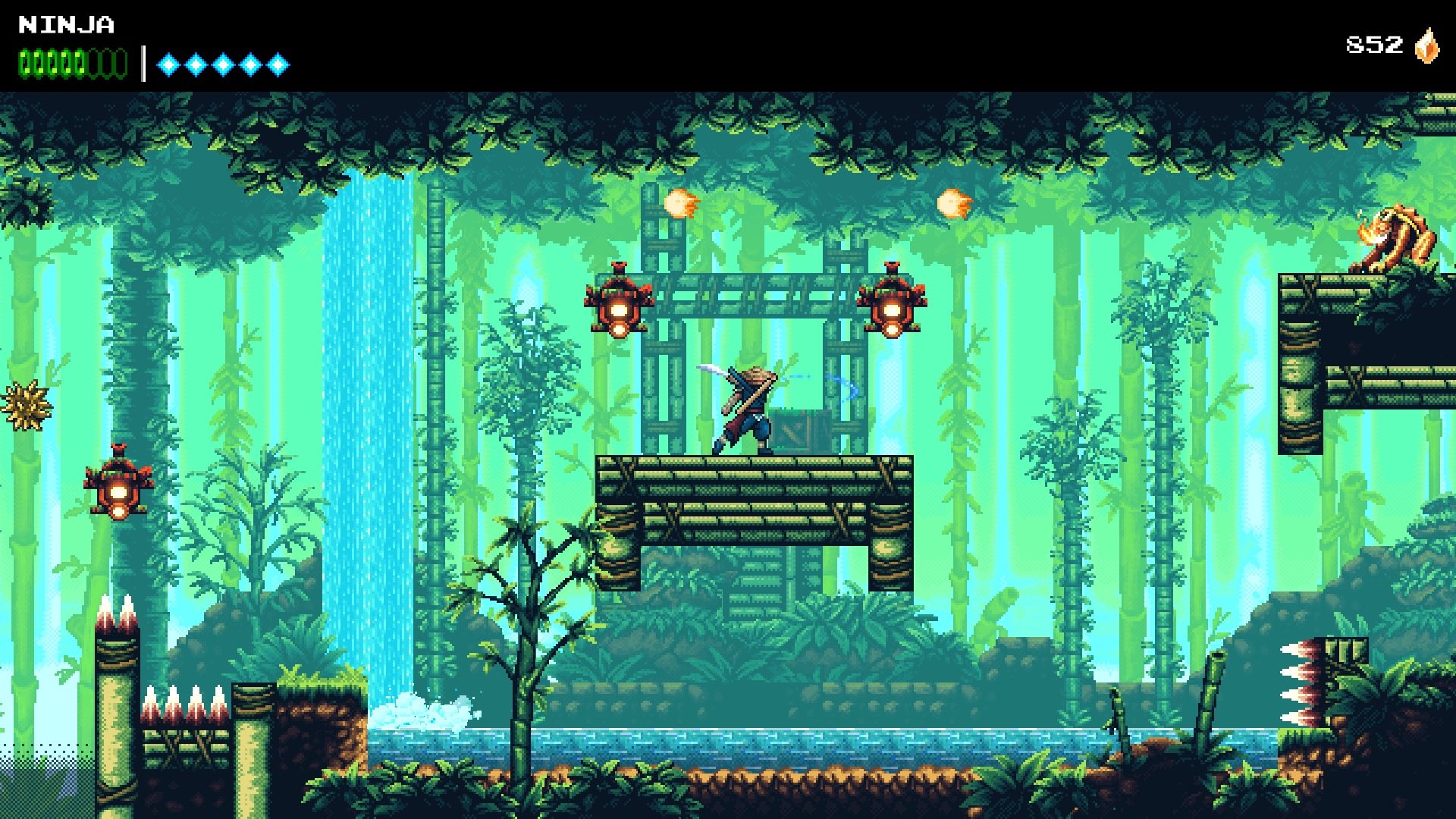 Graphically, seeing The Messenger jump between 8-bit and 16-bit styles is beyond beautiful, with the retro styles showcasing how one can craft beauty with as little pixels as possible. I loved revisiting past levels when the Genesis/SNES-era visuals are kicked into place, as it demonstrates how much more detail developers were able to put into the character's surroundings. What is blocky and dark in 8-bit can become majestic and bright with the graphics update; at the same time, seeing 16-bit levels downgraded to 8-bit brings out a level of minimalistic art that's equally as enjoyable to look at.

Lastly, you cannot talk about this game without a mention of Rainbowdragoneyes's soundtrack. The chiptune sounds that bellow out of the speakers feel right at home with the action that takes place onscreen. It's also amazing to hear the songs be updated whenever you switch back and forth between the two graphical worlds, as they show off the limitations/strengths of what you could create for a video game score in both eras.

The Messenger has it all: fun retro gameplay, a clever story, some excellent humor, and a bunch of memorable boss battles. It's a title like this that makes me proud to call myself a gamer, one that encompasses every great thing about the art form in one fell swoop. Those who own a Nintendo Switch should consider The Messenger a necessity in their gaming library, as it demonstrates how to craft side-scrolling ninja games in the most perfect of ways.