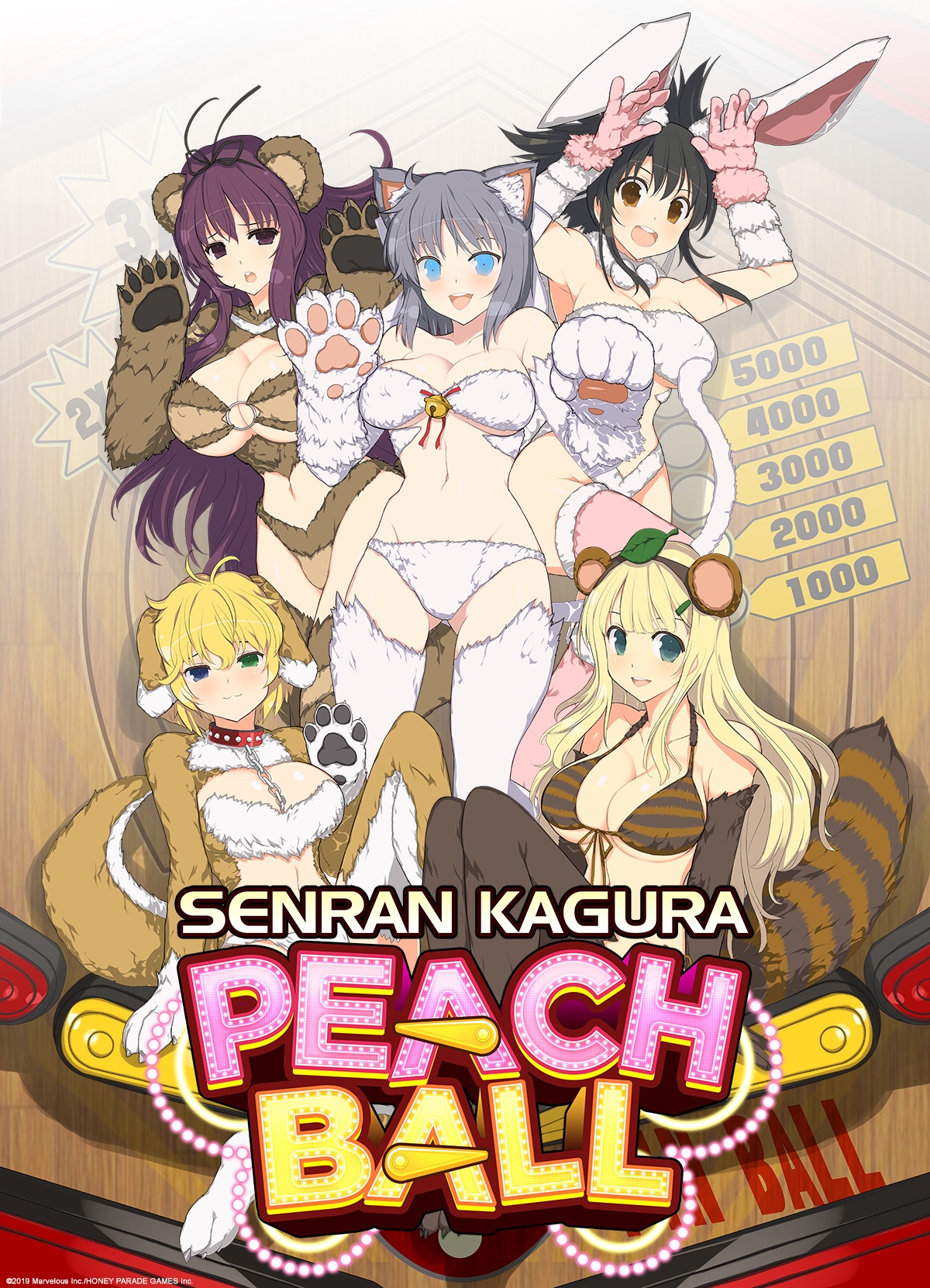 Since the dawn of time, humankind has looked for the answers to our greatest mysteries. What’s the meaning of life? Is there a god? Did the chicken or the egg come first? Can pinball be sexy? Thanks to Honey ∞ Parade Games and the Senran Kagura franchise, one of these baffling questions has finally been answered, in the form of Senran Kagura Peach Ball!

This one’s far different from your usually third-person hack-and-slash/shooter game that fans of the Senran Kagura series have come to know. During an arcade tournament, perverted troublemaker Ryona accidentally unleashes a mysterious liquid concocted by Haruka. This results in Ryona, Asuka, Yomi, Yumi, and Murasaki to be transformed into animal girls and lose all sort of humanity. Fortunately, Haruka has a solution to cure the tainted ladies: a device known as a Peach Ball, which can only be used via a special pinball machine. 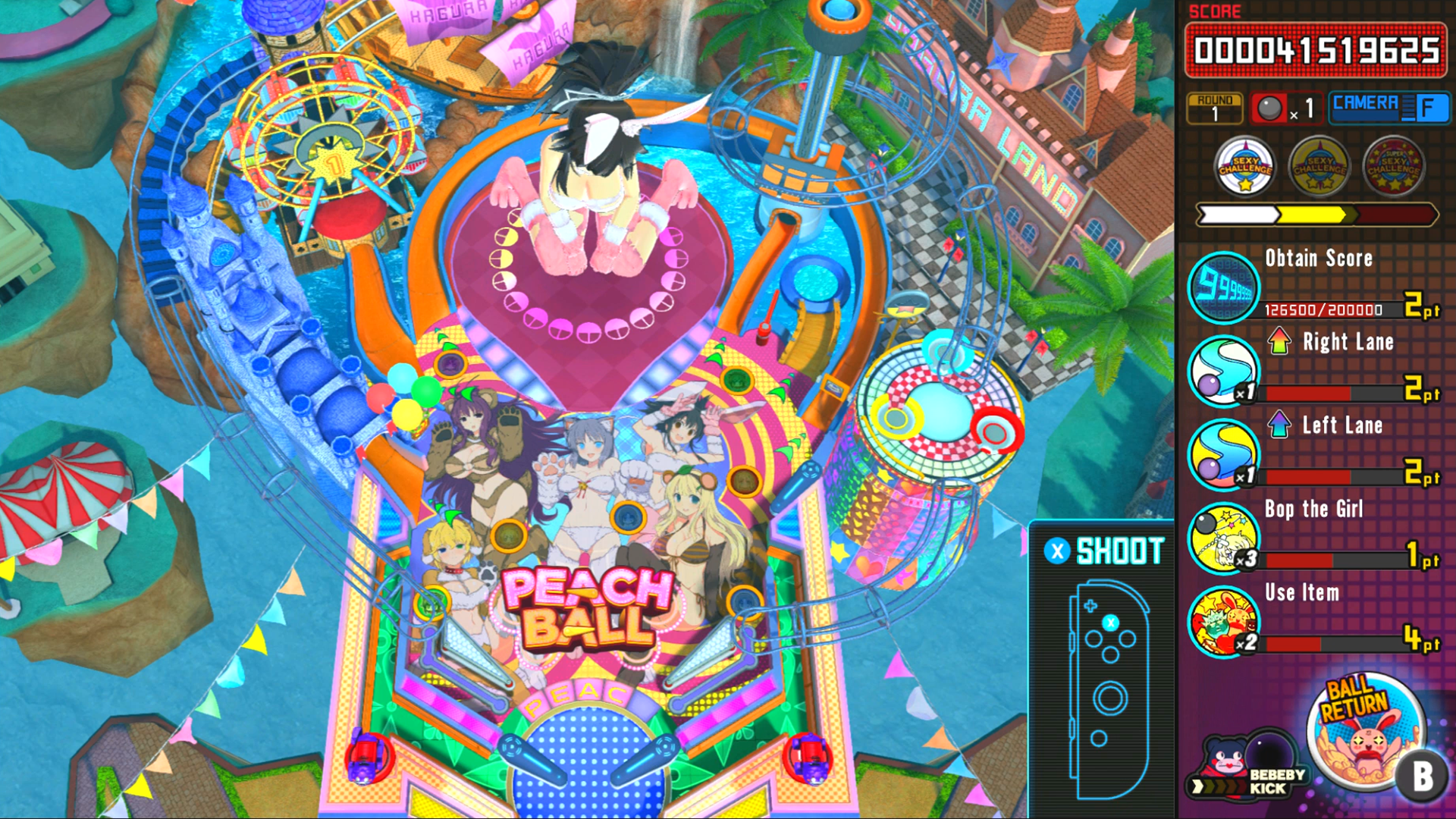 One can easily guess what a Senran Kagura pinball game can lean towards. Each character-based story mode has players going through five rounds of pinball madness, with each character being cured placed smack dab at the top of the machines. This will result in you being able to whack, smack, and even rock these shinobi off their core, as they look on with confusion and — in some cases — overindulged glee. And when you reach each of the three Sexy Modes, it brings the ladies closer to being human.

These Sexy Modes will have you using two balls to smack various knick-knacks like frogs, ice cream carts, and magic hats. The last one, which I’m sure everyone knows is coming, will have you slapping pinballs at these shinobi’s boobs and buttocks in a sight that would cure at least one of The Who’s Tommy’s ailments. Some may roll their eyes at such a concept, but at the same time one can’t help but chuckle at how far Honey ∞ Parade Games will go for a pervy gag. 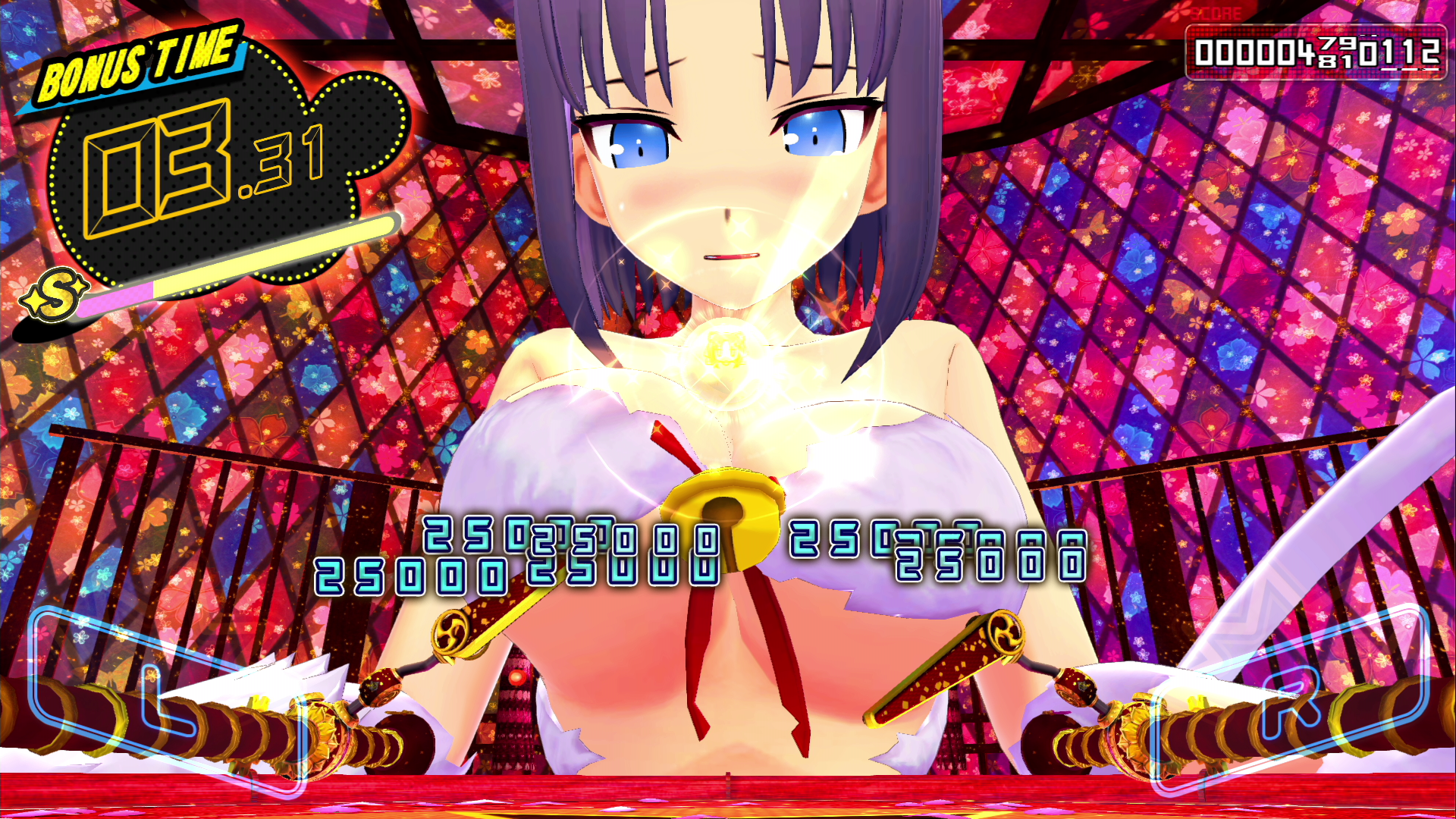 Yes, it doesn’t take a Pinball Wizard to guess that this game was made to amplify the naughtiness that Senran Kagura brings to the table. Peach Ball will make some people blush, whereas others will no doubt find themselves keeling over with laughter over how ridiculous of a game this is. It’s a game that wears its Mature rating proudly and without shame, with the girls of the franchise seemingly being in on how much of a joke this concept is. And it also shouldn’t come as a surprise that the developers managed to churn out a game that is pretty fun for the most part.

I was actually impressed with how Peach Ball manages to emulate a pinball game so seamlessly. The feel of the flippers, bumpers, and other little nuggets that come in your run-of-the-mill pinball table is presented greatly with the aid of both the Joy-Con motion controls and its 3D rumble. Although nothing can compare with playing with a legit table, it somehow manages to capture a pretty good arcade feel as you play it. Of course, it does help that there’s a sprinkle of pervertedness that not even Bally’s 1978 Playboy Pinball table couldn’t even muster. (Okay, it’s more of a bucket of confetti being dumped on us rather than a sprinkle, but I digress!) 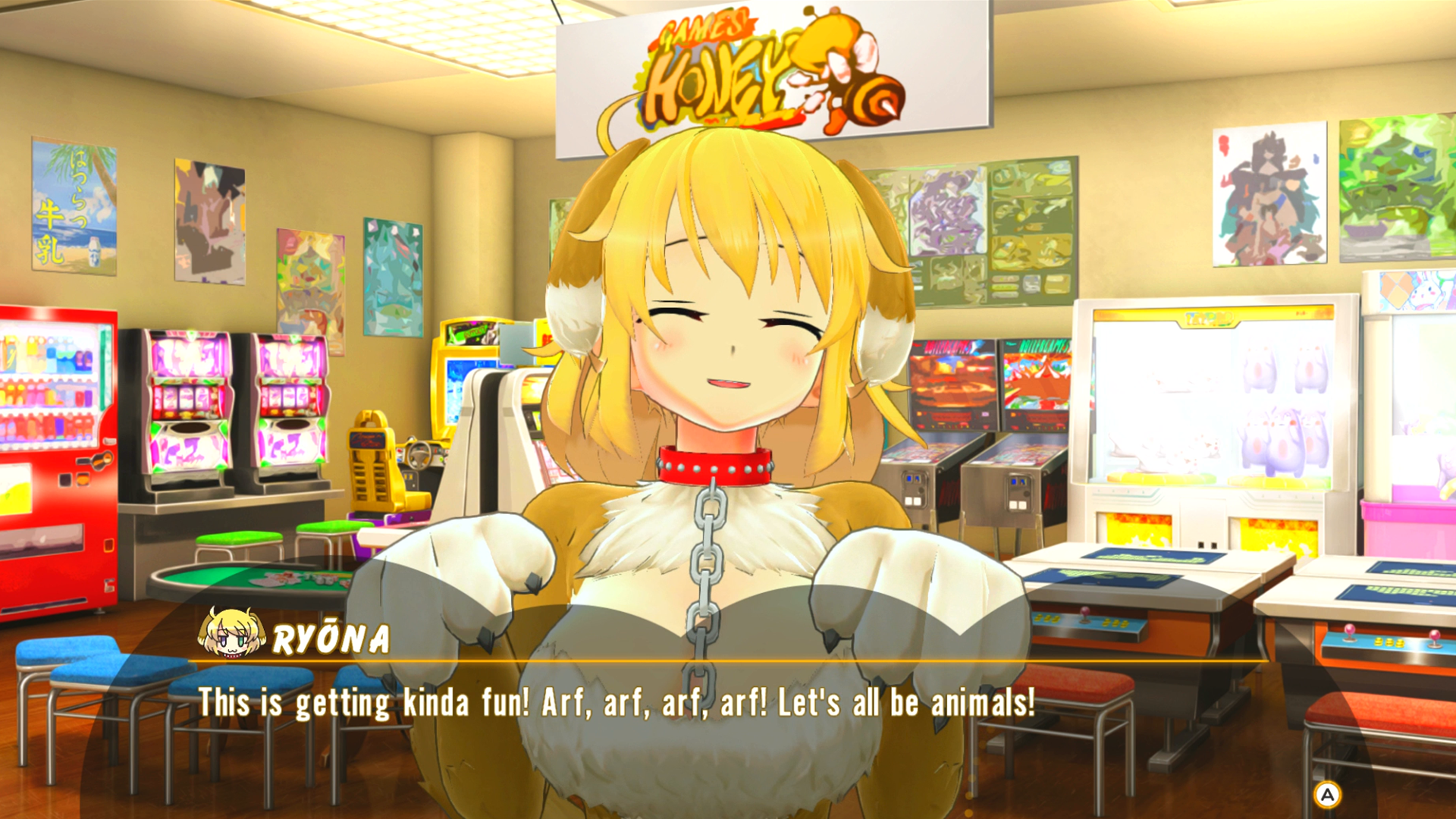 As for its story mode, experiencing it felt like I was watching almost the exact same story five times in a row. Instead of focusing on a separate shinobi clan for each, it only round robin’s five of the main characters while Haruka sits by the wayside and lets you clean up after her mess. While it’s always fun seeing Asuka bouncing as a bunny or Murasaki attempt to be the laziest bear around, it gets old roughly halfway through the main campaign. Despite that, the story manages to still deliver a few good laughs during each turn-around.

However, one of the weakest aspects of Senran Kagura Peach Ball is what it offers for its tables. To be blunt: only having two pinball machines to choose from is pretty weak, especially when you think of what could’ve been conjured up from the franchise’s massive worlds! How is it that Honey ∞ Parade Games can only come up with a theme park and a haunted table, when they could’ve added something like a beach from Estival Versus or a food-inspired one a la Bon Appetit! There’re way too many good ideas that could’ve been used for other pinball tables, but the fact that only two are available here is, quite frankly, kind of lazy. 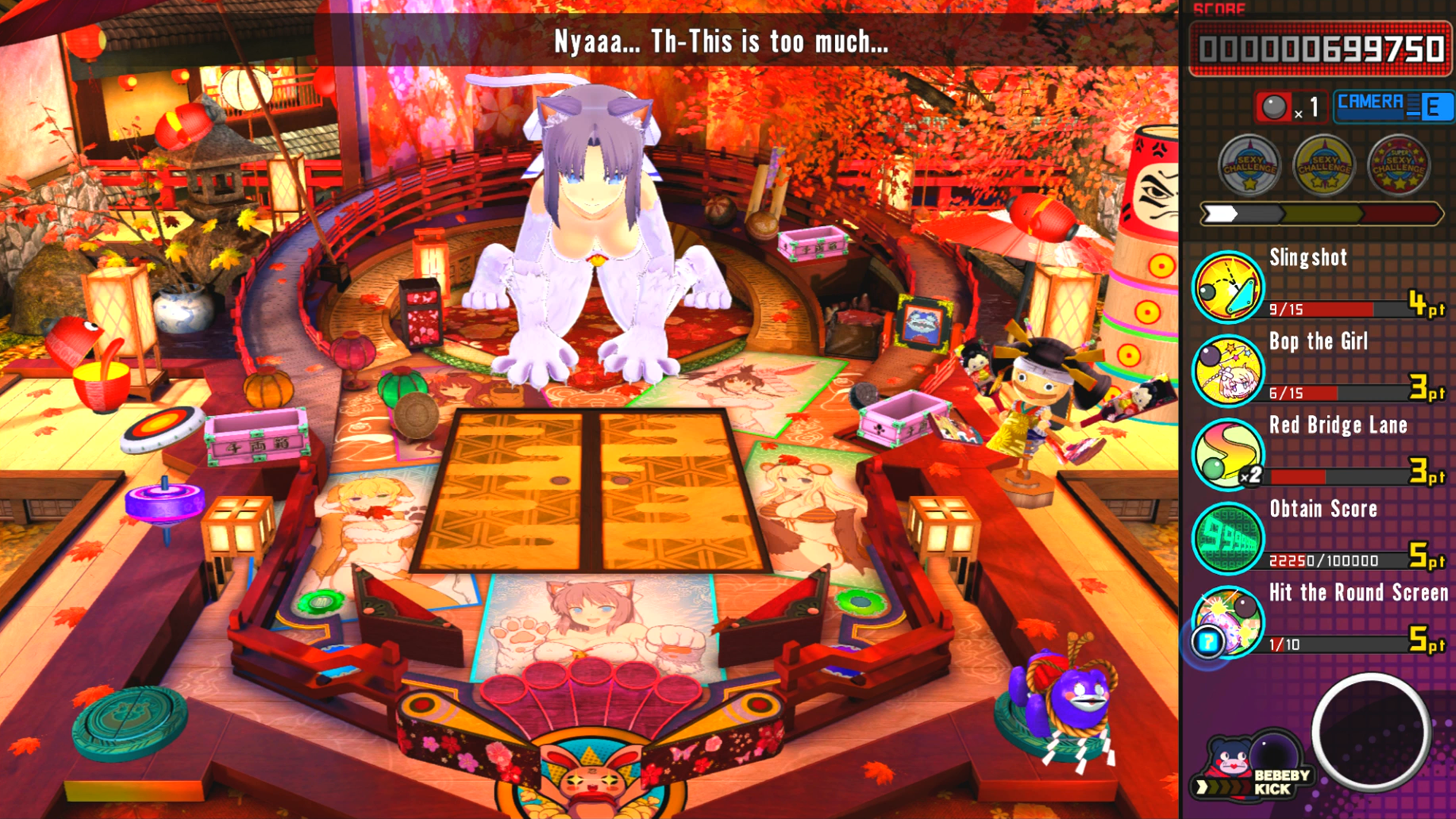 Players can earn in-game cash to unlock various costumes, pics, and music to play around with. Back is the Diorama Mode, which will let you pose the girls (almost) anyway you’d like them in many different settings. Also here is its Intimacy Mode, a staple of the Senran Kagura franchise that fortunately found a way to stay put on the Nintendo Switch! (Note to Sony: stop being such prudes when it comes to this stuff!) These offer a little bit more fun, although the novelty of spraying the shinobi with water and giving them head pats might flutter off after a couple of run-throughs.

Senran Kagura gives pinball a risqué flavor in Peach Ball, delivering a pretty good time for fans of the series. However, what is offered table-wise will certainly keep people from grabbing the game in the present time. Once offered at a discount, I’d say dive into some naughty pinball shenanigans. It’ll at least keep some fans at bay until the next chapter in the main Senran Kagura series finally comes out.

Promotional consideration provided by Olivia Pagano of One PR Studio