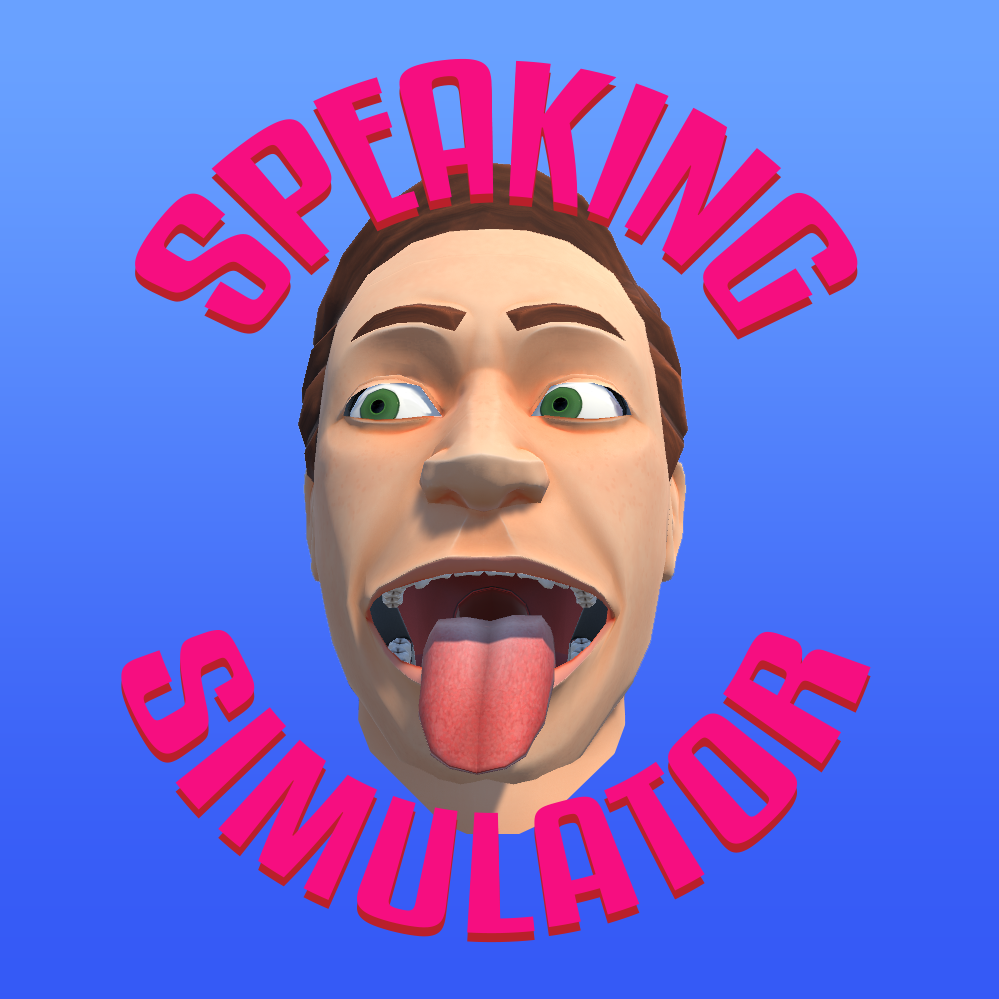 On the surface, Affable Games’ Speaking Simulator is pretty dumb. And yet, I somehow found it shockingly relatable. Here is a video game that takes a wacky premise and gameplay mechanic, and creates a visual representation of how it feels to be socially awkward. For this game to accomplish that, it has to be commended.

Of course, Speaking Simulator isn’t about overcoming conversational anxiety; it would be deemed too meta if it were something like that. Instead, the game has you take control of an android that’s trying to blend in with humans in order to achieve world domination. You are placed in various scenarios, ranging from going on a first date and conducting a job interview to even making a eulogy. And as a robot, speaking like a human is not easy. 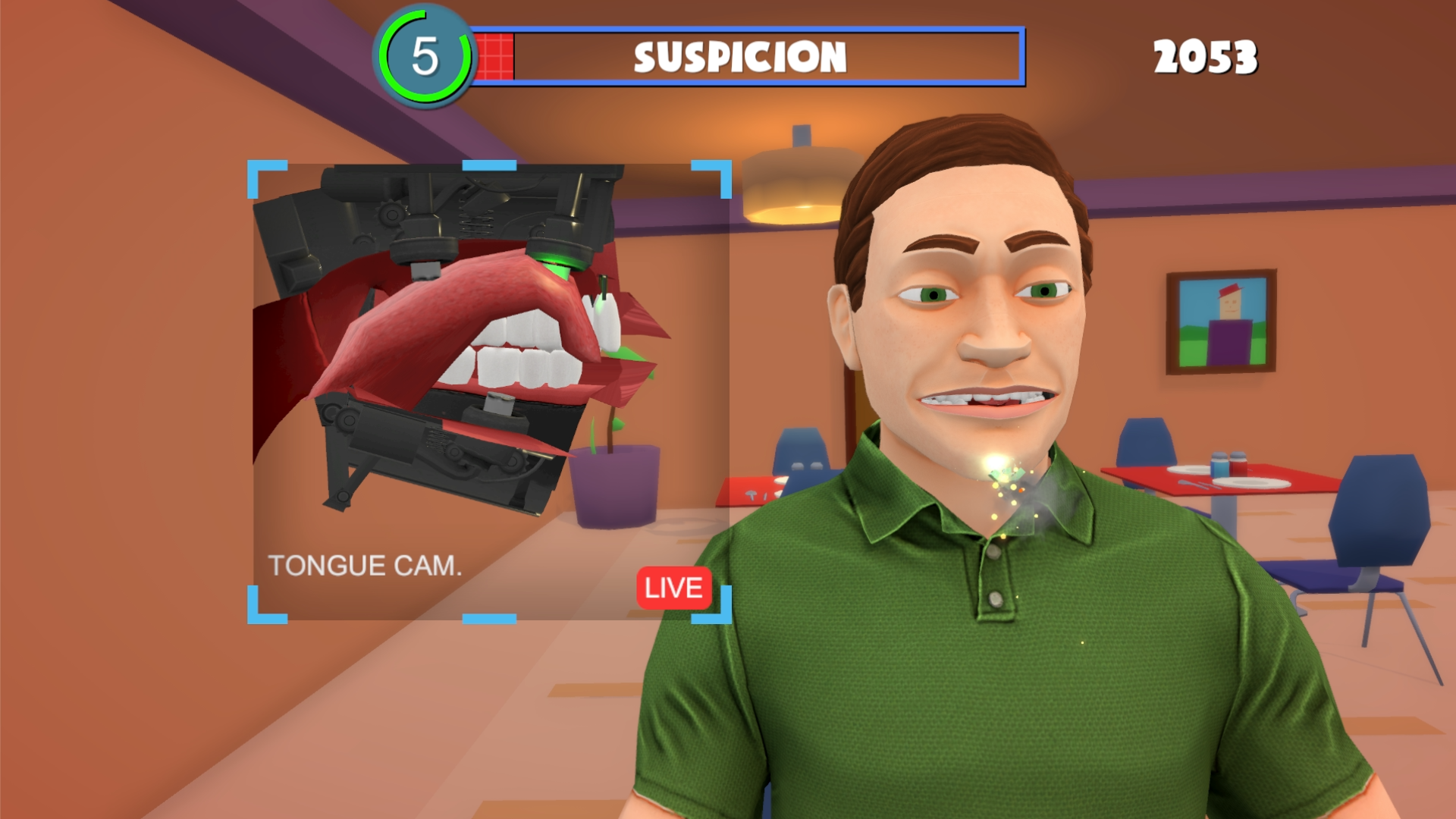 Using the Joy-Cons, players must control every single aspect of the android’s speech patterns. The movement of the mouth, the wiggle of the eyebrows, the lashing of the tongue, and even eye contact must be done in near-perfect synch so as to utter every single syllable. If you mess up, the more likely you’ll be caught and be outed as a non-human entity. Keep up the pace, and you may find yourself giving speeches in front of some powerful individuals.

As you progress through the story and level up, you’ll be given the chance to upgrade your robot overlord-to-be to better its speaking skills. From having a quicker tongue to bettering your emotions, these additions to your android’s hardware will make it slightly easier for you to reach your goal of conquering the meatbags of Earth. Returning to older levels to gain higher scores will be easy with these upgrades, but the later levels you’ll still find have enough of a challenge even with them. 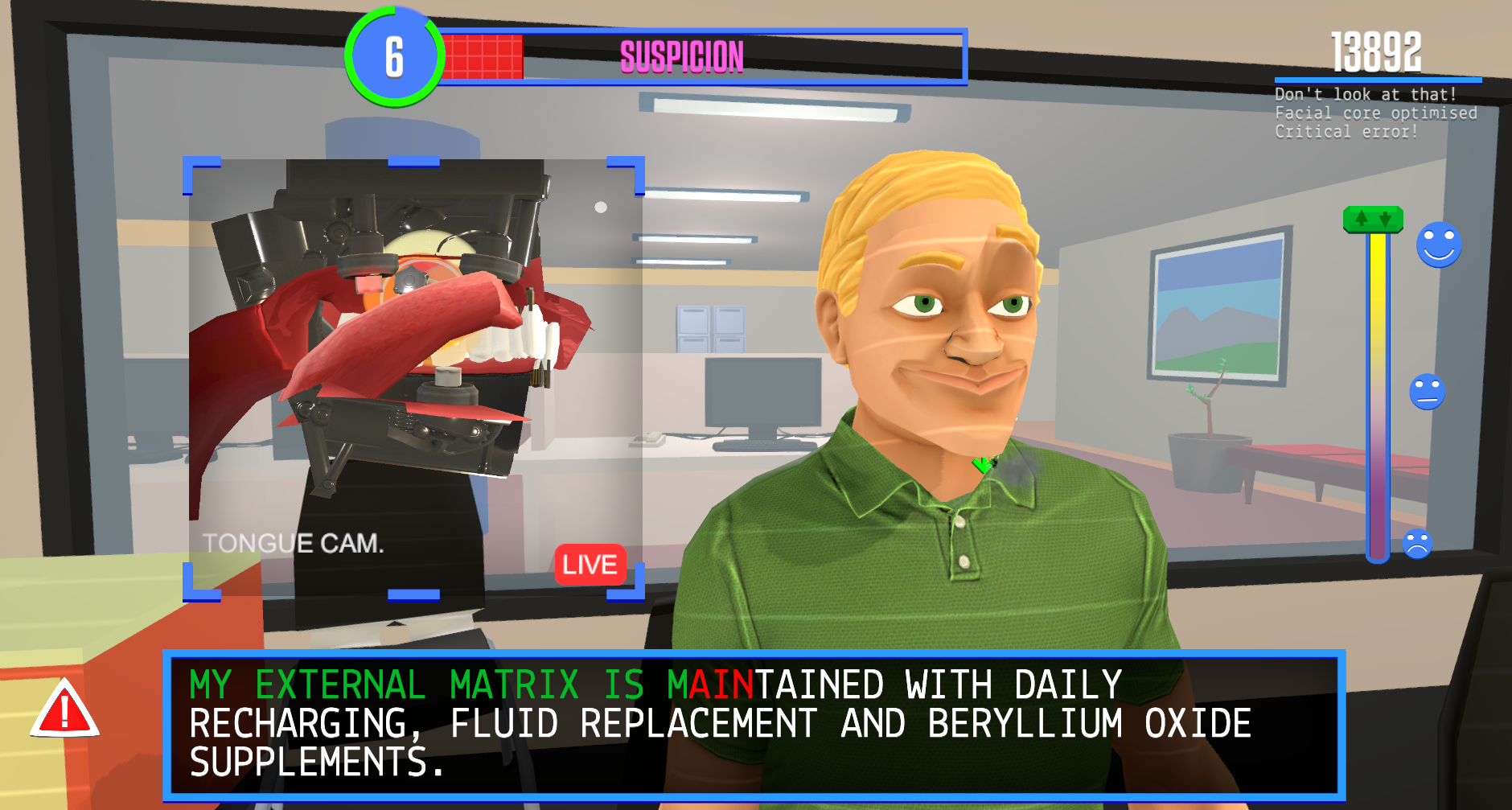 It’s the control aspect that makes Speaking Simulator a bonkers game. Attempting to multitask as you try to move your mouth and tongue at the right position offers up a hell of a lot of challenges. Be off by even the slightest, and you’ll risk having your cover blown. To be blunt: this title is wicked hard, but it can be laughable at times. (Playing it co-op could also bring its own level of fun, especially if each person takes hold of a single Joy-Con to make the craziness come to greater fruition.)

One of the strongest parts of this game is its sense of humor, which takes the robot hijinks to high levels. Watch as teeth pop out of your mouth, smoke flows through your nose, ears spring off, and your tongue droop down to your chin as the robot attempts to play it cool. It’s incredibly goofy in all of the right ways, with even the greatest loss becoming some sort of hilariously visual reward. 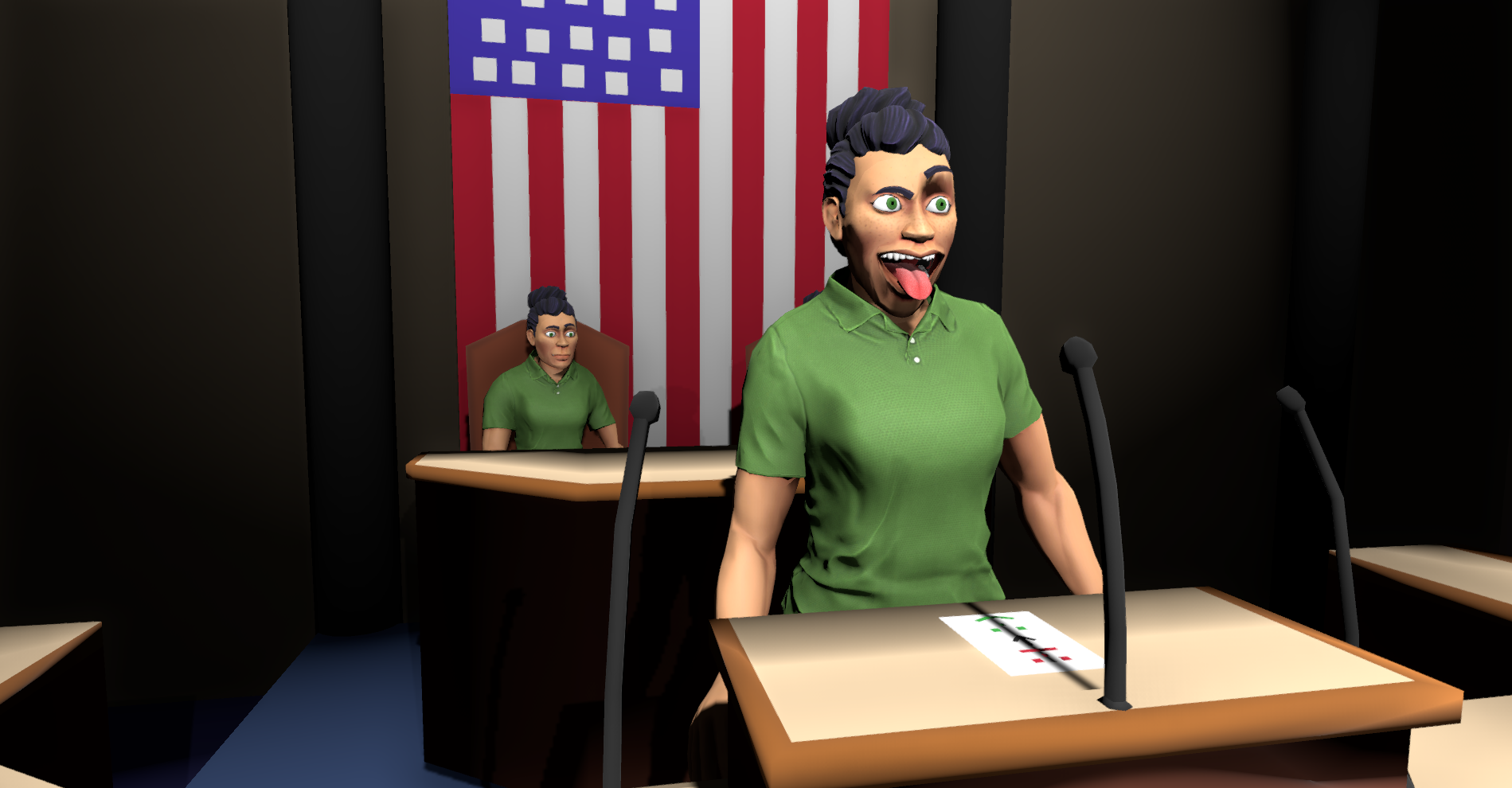 But wow, does Speaking Simulator serve as a strong metaphor for what it’s like to deal with social awkwardness and anxiety. I may never have had my tongue fall out of my mouth or feel smoke coming out of my ears as I attempt to have a conversation, but I sure have felt like I have! Every muck-up, every stutter, and even the occasional tongue-twisting and dry mouth aspects of dealing with something so simple as having small talk is captured in this game. Dare I say, I somehow have found a way to relate to this world conquest-thirsty robot throughout its two-hour campaign.

With that being said, it’s easy to see the flaws this game has. It’s not the prettiest title on the Switch right now, nor is it the most tech-savvy. Some aspects seem to be buggy on purpose, to bring about a level of hilarity that even the game developers didn’t initially intend to do. Its soundtrack can also be somewhat grainy, with some song choices being literally painful to my ears. (Thankfully, you can turn off the music in the Options menu.)

Speaking Simulator isn’t a masterpiece by any means, but it’s still good for a few laughs. If you’re able to get a second player on-board, it unwittingly becomes one of the most unique co-op experiences out there. Still, even with all of its flaws, Speaking Simulator has a lot going for it, especially for those wanting to know what it’s like to deal with being a socially inept individual.