If you (the fans) are anything like me, you’ve been waiting for years upon years for the sequel to one of Blizzard Entertainment’s most famous strategy games to date. While we still don’t have a release date, I can tell you what will be coming in the collector’s edition package of Starcraft II: Wings of Liberty. And boy, it’s a doozy. 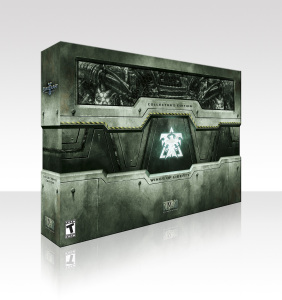 Let’s get right down to it and list it out right here:

• The Art of StarCraft II: Wings of Liberty, a 176-page book featuring artwork from the game
• An exclusive 2GB USB flash drive replica of Jim Raynor's dog tag, which comes preloaded with the original StarCraft and the StarCraft: Brood War(R) expansion set
• A behind-the-scenes DVD containing over an hour of developer interviews, cinematics with director's commentary, and more
• The official StarCraft II: Wings of Liberty soundtrack CD, containing 14 epic tracks from the game along with exclusive bonus tracks
• StarCraft comic book issue #0, a prequel to the comic series
• A World of Warcraft(R) mini Thor in-game pet that can be applied to all World of Warcraft characters on a single Battle.net account
• Exclusive Battle.net downloadable content, including special portraits for your Battle.net profile, decals to customize your units in-game, and a visually unique version of the Terran Thor unit 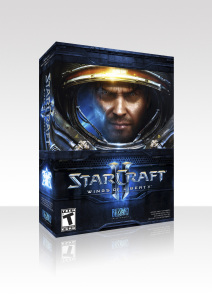 All this comes packaged together for the price of $99.99. This is a steal when compared to the standard edition’s price tag of $59.99. With that out of the way, we can examine it piece by piece. You know, after you stop joygasming. I’ll wait.

Okay, so what do we have? An art book is certainly something to be expected, sort of standard even. But 176 pages? That’s longer than some of my old college text books. I for one can’t wait to drool over the beautiful, and hopefully dark, art of the Starcraft II universe. The second item on the list is one that really caught my fancy. Now, I already own both the original Starcraft and its expansion, and the second Blizzard released an update with what was essentially a CD crack, I put both onto a 2 GB memory stick immediately, like any fan would. But to be able to carry around my original Starcraft games on a Starcraft themed memory stick, modeled after the dog tags of the original rogue marine – Jim Raynor? You should have seen my eyes light up.

The rest of it is pretty standard stuff; but of course, nothing to scoff at. Interviews with developers and sound tracks are in a lot of collector’s editions, but if they hadn’t been included then this wouldn’t be such an impressive package. For those interested in comics, an issue #0 is something to pine over. WoW players will be interested to see that Blizzard is thinking of them, allowing them to have an in game pet of the Terran’s most powerful unit, the Thor. And of course, would it really be complete without some kind of in game goodies? Terran players (my favorite race in the previous iterations) will be happy to see their specially decaled Thor in action.

Information like this is gold to fans of the series, considering that the release date for this monster of a title has still yet to be released. I for one wonder if there will be collector’s editions of the two expansions set for release (one protoss themed, one zerg themed.) My wallet hopes not, but my heart hopes so. Speaking of people’s wallets, there is one more, tiny thing to mention. From what I understand, the new version of Blizzard’s Battle.net will be launching alongside Wings of Liberty, and playing online will incur no additional fees (though there will be premium maps available for purchase and download – said to be held to a quality higher than the community built map of DotA from Warcraft III.) That’s good news for everyone, and has cemented me as a fan of Blizzard… Even if I do hate WoW.