Tri It Now, Thank Me Later

Monster Hunter Tri is officially out and I couldn’t be more addicted.  There’s just so much to do with hunting monsters, decorating your hut, customizing armor and weapons, going online with friends, arena battles and cooking meat to a catchy tune.  In addition, there are so many fun toys to play with in association with this game.  With the debut of the Classic Controller Pro and inclusion of Wii Speak, there is quite a bit to this package. 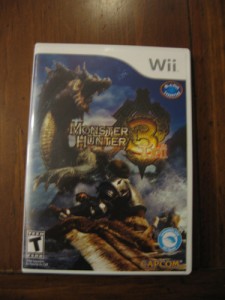 The game sets you up as an up and coming hunter called to a village that is being plagued by a giant sea monster.  It’s up to you to stop this monster, but first you have to do some hunting so it doesn’t use you as a toothpick.  The hunting quests are a lot of fun.  Every time you meet a new mark for the first time, you get a nice cut scene of the monster strutting its stuff.  Upon completion of the kill, it gives you a minute to make sure you have the chance to collect your loot.  You can then use this loot to forge new weapons and armor, often stylized to look like what was used to make it.

With the main quest largely being a lather-rinse-repeat situation, one would think that it would get a bit stale after a while, right?  Wrong.  The addictive nature of loot collecting aside, there is so much else to do, the disc may never be ejected from the Wii.  There is a fairly deep item combination system involved in the creation of all kinds of items used in the game.  There are arena battles which pit you and your friends against a monster for the thrill of the fight.  You can also meet up using the city option in the startup menu and just sit around and chat with your friends. 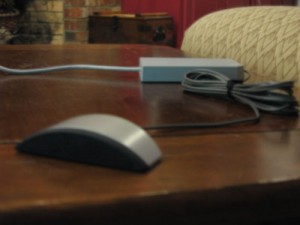 The Wii Speak works pretty well within the game, allowing for much quicker strategy when fighting monsters.  My only gripe about it is that you can only chat with someone else if both parties have the Wii Speak.  I suppose I can see the logic in this, from a safety standpoint, but it would be nice to have the option of only one person speaking if someone didn’t want to shell out the $20.

For whomever pre-ordered the bundle version of the game, you got with it the brand new Classic Controller Pro.  While I will whole-heartedly admit that it is nothing more than a black classic controller with handles on the sides, that is exactly what the controller needed to be great.  It feels much more natural this way and will be the non-mote controller I use from now on. 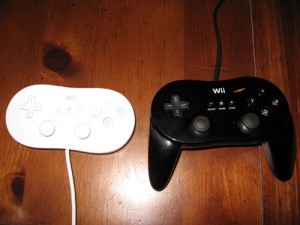 Before I finish up, there is one more thing I need to discuss about this game.  The barbecue spit mini-game.  While I know that it is going to drive my girlfriend clinically insane, I can not get enough of cooking meat to that hilarious tune.  It both completely doesn’t and does match the tone of the game all at once.  So, with all of this in mind, I wholly recommend this game to anyone who loves some loot collecting.  Sooooo tasty!

Hulu do do new voodo to you!