HomeReviews"Mighty Book" Worthy of the Boosh Name
by: kingbabyduck
0
Reviews

“Epic” is not a word often used to describe TV-based books. However, in the case of The Mighty Book of Boosh, it’s the only word in the English dictionary to rightfully label it.

Written by The Mighty Boosh (Julian Barratt, Noel Fielding, Rich Fulcher, Dave Brown and Michael Fielding) and fellow British comedian Richard Ayoade The Mighty Book of Boosh is a smorgasbord of everything an admirer of this BBC comedy series can ever ask for. Along with behind-the-scenes photos and jargon from the troupe the Book of Boosh includes new and original stories not seen by human (or, in Bollo’s case, gorilla) eyes.

The Mighty Book of Boosh is filled with gems that will tickle one’s funny bone thousands of times over; from Bob Fossil’s A to Z of Animals (i.e.: Walrus is the “Goofy-tooth Slob,” Pandas are “The Black and White Chinese People That Eat Sticks”) to the art collection of Old Gregg, everyone’s favorite transsexual merman. Fans of the show will also recognize such stories as Bumbaklaat the Crocodile, and the strange ramblings of the awkward-talking Moon. And yes, all the Crimps are here for enthusiasts to memorize and impress their friends with.

This book is unique as it has the ability to capture the voices and personalities of each and every one of The Mighty Boosh’s varied characters. Howard Moon (Barratt) comes off as a man of intellect, with his writing style designed to look like a world history book one sees in a tenth grade social studies class. Vince Noir (N. Fielding) jumps off of his pages with vibrant psychedelic glam rock colors and glittery scribble that looks as if it was written on a Cambridge rock club’s toilet stall. Naboo (M. Fielding) comes off as stoned philosopher, and Bollo (Brown), speaking in third-person, seems worried about everything that’s just around the corner (“Bollo got a bad feeling about this,” he’ll quip). It’s kind of creepy, though, how Bob Fossil’s words tend to make it seem like he’s rubbing his nipples right next to you. Perhaps it’s a bit too much there, but that’s what makes The Mighty Boosh great: it can make you feel a bit uncomfortable at times, yet you’ll still be clamoring for more.

In the beginning of the Boosh’s hit series the announcer exclaims, “Come with us now on a journey through time and space.” When one reads The Mighty Book of Boosh they, too, will be transferred into the world where a tit-headed tentacle man named Tony Harrison and a green-skinned donut-eyed Hitcher is the norm. Readers will laugh till they cry, and will literally have to force themselves to close the book shut when bedtime comes waltzing in. In short: The Mighty Book of Boosh is an experience of epic proportions.  I’m Old Gregg! 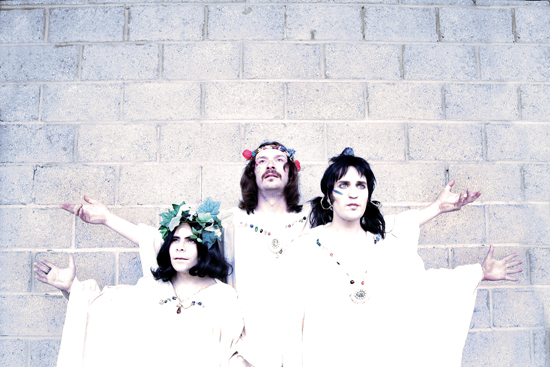