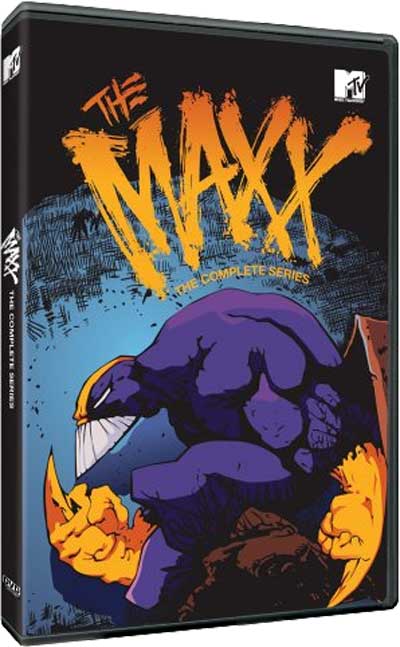 It's wet. Dark and wet. The kind of weather that penetrates. Makes your skin feel itchy and oily. Dirty kinda, but real, too. That's good. It's time for Cheers. Sam and Diane. Norm Peterson and the Coach. And then after he died, Woody. I don't have a TV now, but that's okay. The shows in my mind are almost always better.

These were the first words spoken by our hero in the MTV series The Maxx, based on the comic book by renowned artist Sam Kieth. After fifteen years MTV has yet to produce a show quite like it since, and stands the tests of time as one of the greatest animated series ever made. What made The Maxx so fascinating was that our hero was not some loser kid who gained superpowers, or an alien sent to save the universe. No, Maxx was but a homeless man with a lot of psychological issues out to rescue the world around him from being destroyed; a world created by a Miss Julie Winters.

The Maxx shifts between two worlds: the real world in a Brooklyn-like setting, and a prehistoric place called Pangaea. In Pangaea the world is run by the Leopard Queen, a woman who bears a striking resemblance to Julie. This is because Julie created Pangaea when she was a child, but gradually made it her escape after being raped and left for dead when a college student. Because of her dwelling in the Outback both the real and fantasy worlds slowly began to collide, creating an unstable balance. Why Maxx can shift between these worlds is slowly revealed by the villain of the story: Mr. Gone.

Mr. Gone will probably go down as one of the greatest villains (or semi-villains, depending on how far you've read into the original comics) to ever grace both a comic panel and a TV screen. While a self-proclaimed "student of the mystic arts" he is not a powerful villain, but rather a serial rapist and murderer with the ability to mindfuck the hell out of even the most philosophical being. Gone receives assistance from the Isz, a creature from the outback. In Pangaea the Isz are white and look kind of harmless, but in the real world the Isz are black with sharp teeth and a nasty attitude. The only people that can stop Gone are Maxx and Julie, with the latter even going as so far as to cutting his head off. Strangely Mr. Gone serves as the character that ties all the loose ends together, revealing all that was locked away within Julie's subconscious.

It's been a decade and-a-half since The Maxx graced MTV with his all-powerful presence, and to this very day the series still gives me the chills; sometimes it even leaves me awestruck. I was but a ten-year old when I was introduced to this series, but even back then I fully understood what was going on in the show. Gone represented the true evils in the world; the real world of murderers, rapists, thugs and drug dealers, and not the ones with evil superpowers and billions to spend. The characters of Maxx and Julie also represented the delusional mind-scape that our generation seems to have in regards to one's personal balance of reality and fantasy. We may want to roam the jungles of ancient times, but we have issue realizing that that's not gonna happen anytime soon.

Since The Maxx first aired there has yet to be another animated series anywhere (not even Japan, shockingly!) that has ever matched its visual style. Ranging from fluid animation to still paintings The Maxx was a show whose style left viewers with gaping jaws and wide eyes. Most importantly the storyline was original and astonishing, even if you needed to major in Psychology to understand the full aspect of the show. From spirit animals and Julie's friend Sarah to Julie saying farewell to Maxx (which has been the only time a cartoon has ever made me cry) the series did a standout job with revealing (almost) all the truths to these characters. It's but a shame that they didn't continue animating the series, as a few things were left out of the show. Viewers never got to see how Julie and Maxx first met, or Julie's friend Sarah's battle with the giant yellow banana slug Iago, or the story of Julie's son Mark. Oh well, that's what reading the comic's for.

Credit also must be given to the voice actors, as well. Michael Haley's portrayal of our title character was memorable in that he gave the big purple lug with claws for middle fingers a heart and soul unlike any other actor could. Julie's voice actress Glynnis Talken managed to add realism to this damaged woman's psyche, as well as bring forth a sort of women's empowerment over one girl's tragic events. Finally we have Mr. Gone, played by the late-great Barry Stigler (best known to Transformers fans as Scourge). Stigler not only captured the voice of Gone, but his personality and mindset, as well. Even to this day reading the original comics these characters' voices play vividly and strongly inside my head.

The Maxx is now available on DVD exclusively on Amazon, and it is worth every penny (especially to hear the audio commentary from the creators and the retrospect). However if you are still not convinced of how amazing this series is, you can watch the entire show here on its MTV page. And one more thing: as I write this I keep looking up to my Maxx action figure I bought fifteen years ago from a K.B. Toy Store. It's beaten, some of the paint is chipped away and the top and bottom of the figure is taped together after an unfortunate accident that left the purple superhero split in half. But it's still my most prized figure, and wouldn't part with it for anything; for it helps bring back some of my most favorite childhood memories, back in the days when MTV meant something to my generation.