If you’ve been wondering what you’ll get in game when you pre-order the new Fallout from certain retailers, then I’ve got the info you’ve been searching for. 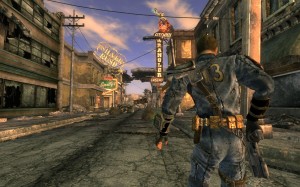 The Classic Pack (pictured above) is what you get if you preorder the game at Gamestop. It comes with:

Fans of the original Fallout will squeal for the nostalgia that comes from owning an armored vault 13 suit at the start of the game, and I’m sure the canteen continues to be useful the game throughout. 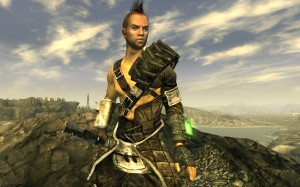 Next up is my personal favorite of the 4 packs, the Tribal Pack, available when pre-ordered through Amazon. It contains:

It’s a very primal set of armor and weapons that will give a different feel to the game. Using throwing spears and a machete instead of guns could actually provide a whole different gameplay experience. At least until you run out of spears that is. Plus, I just love that halved tire being used as a spaulder.

Continuing down the list we have the Caravan Pack. You’ll obtain this pack if you pre-order though Steam, or at Walmart: 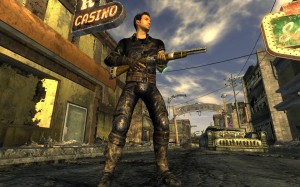 I found this pack interesting in the sense that it gives you an item for spotting enemies or locations from long distances, and then gives you a close range weapon. Nevertheless, a shotgun is nothing to scoff at. Any time I was in trouble in Fallout 3 I could pull out my trusty, rusty combat shotgun and put a few dozen holes in the head of my enemies. The repair kits are new, and must be used as a game mechanic so you don’t have to drag around that heavy second power armor suit just so you can repair yours when it eventually falls to pieces. 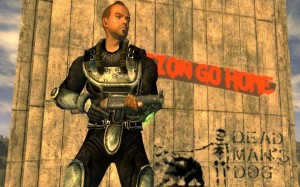 Finally, we come to the Mercenary Pack. This pack will keep you killing through broken limbs and paper cuts:

This pack happens to come with my favorite set of descriptions. Now I heard that stimpaks can no longer be used to heal busted limbs. That is where the doctor’s bags come in, and healing is this packs name. I don’t know what a super stimpak is, but I can only assume that it will keep you alive better than a normal stimpak. Another huge perk of this pack is that you start the gram with a grenade rifle, and one that reloads fast to boot. This could be a huge boon to you and will provide you that extra punch needed for particularly tough-skinned baddies.

All-in-all these pre-order packs are cool. However when you think about it, they’re not that useful. At some point in the game you’re sure to find weapons or armor to replace the items in these packs, so I guess there’s only a slight incentive to go for them. Even if the packs won’t be that useful in the long-run, it’s nice to see this game getting even more hype than it already had.