Mafia II is a game that I have already discussed in the past, but at E3 I got the chance to get my hands on it and now I have more to say.  The good folks at 2K Games seem to have spun quite a yarn and while the gunplay was definitely functional, the thing that really impressed me about Mafia II was the atmosphere the game exudes.

I would separate the demo I played into about three parts.  There was the experiencing the city portion, the shooting guns section and the getaway car conclusion.  After a short cutscene, the game starts up in your apartment with the phone ringing.  When you answer it, you are briefed to drive to your mission.  While you could drive straight there and get right to the firefight, the demo gave me 20 minutes to just enjoy the scenery and  I took it up on that offer.

This game screams the 1940s-1950s era.  Everything from the cityscape to the cars and clothing just oozes the charm from that time period.  I actually ran out of time looking around the city because I was just having so much fun appreciating the ambiance.  They even, as collectibles, have Playboy Magazine centerfolds from the 1950s.  I would say that the setting is brilliantly executed and it absorbed me quite a bit. 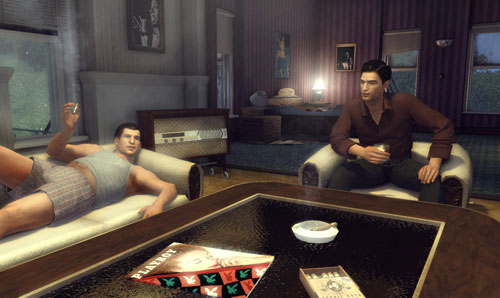 Once I got done gawking at the city, I eventually did find my way to the mission.  After a cutscene and a short drive, I arrived at the first mission site.  The gunplay, while nothing groundbreaking, did behave as well as expected and I managed to only die once.  The good news to me was that the ambience kept true all through the mission and that is one thing this game definitely has going for it.  In addition, having your buddy Joe with you throughout the mission was a ton of fun.  The characters playing off of each other added a lot to the experience.  The weapon variance felt fine and the cover system, along with how it could be destroyed, were all well implemented.

Once I got to the end of the mission, I had to escape the fuzz in my getaway car.  This was my one hangup about the demo.  I did get the hang of it after a couple of tries, but driving at a higher speed was a little tougher than I expected.  Once I got the hang of it, I shook off the coppers and my time with Mafia II unfortunately came to a close. 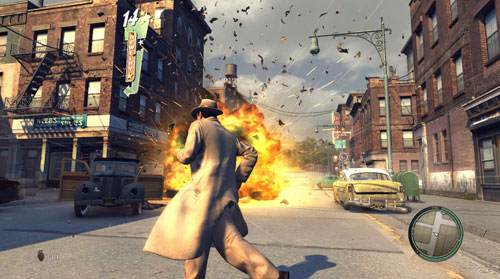 If you like a good mobster story and you like a game that has a great atmosphere and character, then this is one you’ll want to keep your eye on.  Look for Mafia II on August 24th for the PC, PS3 and XBOX 360.  Don’t fuggeddaboutit!