Downloadable games always seem like they can be either very promising or an underdeveloped mess.  While at E3, I stopped by to see the good folks at Square Enix and got some hands-on time with Lara Croft and the Guardian of Light.  Much to my delight, it’s looking like Lara’s latest adventure, though not a part of the main story, is going to be one co-op isometric-camera action title you won’t want to miss. 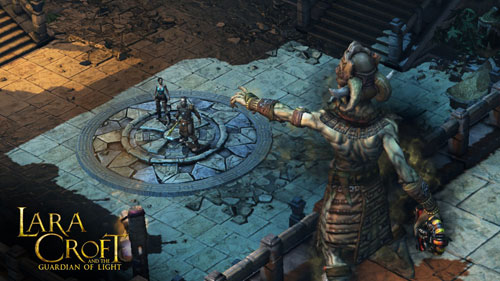 The first thing you’ll notice about the latest Croft title, is that this is no ordinary Tomb Raider game.  As mentioned before, the camera is in an isometric point-of-view and while the game still does have dungeons and puzzles, the focus is much more toward action.  The story follows Lara Croft and Totec, a two-thousand year old Mayan warrior, in their quest to recover the Mirror of Smoke from the Temple of Light.  Lara will be wielding her trusty dual pistols and a handy grappler and Totec has an unlimited supply of spears at his disposal.

When I stepped up to play the game, I was greeted by Producer Forest Swartout Large who was more than happy to show me the ropes.  One of the biggest cooperative mechanics in the game focuses on how to get around the environment.  Totec has a shield which Lara can stand on to get to high places and once she’s up there Miss Croft can use her grappler to give the ancient Mayan a hand up.  Totec can also use his spears to create beams that Lara can use to jump across gaps or up a wall.  There are also puzzles that require communication between the players to overcome.  One example was a floor filled with spikes that, given the correct use of stepping on panels, led to a treasure.

While getting along in co-op is great, there is also ample opportunity to one-up your friend along the way.  Each player gets a score for how well they are doing, so if you’re feeling competitive, you can try to beat each others score.  You can also mess with your friend if you’re feeling devious by blowing up a car with your unlimited bombs or stepping off the panel on the spiked floor so your buddy get skewered. 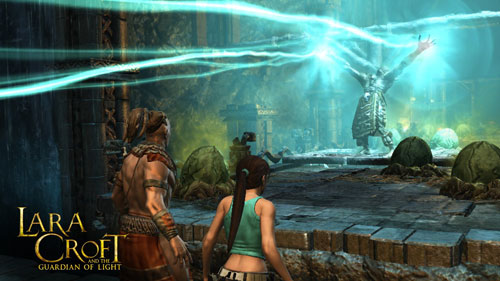 Now I think all of us who played Resident Evil 5 knows what happens when you take a co-op focused game single player.  Luckily, in this case, there is not going to be that problem.  There is a single-player campaign in this game, but when you go it alone, you are not going to be followed by a moronic CPU character.  Instead, Lara gets her hands on some spears and Totec saves himself for the cut-scenes.  Thankfully, this means that the game will retain the same fun whether or not you have an available buddy.

I am a huge fan of cooperative multiplayer games.  It tends to be less tense when everyone playing gets to win.  Couple that with the ability to still have a functionally good time with it by yourself and this game is one I don’t want to miss!  Look for it on Live Arcade, PSN and PC sometime in mid 2010.

Watch "Welcome to the Space S...