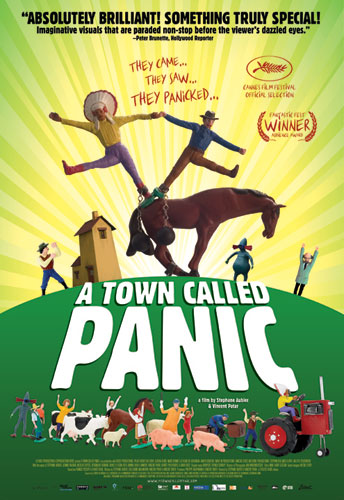 Leave it to the Belgians to create a movie with a random chain of events, ending with one hilarious conclusion. Such is the case of the 2009 animated film A Town Called Panic.

Based on the TV series of the same name the film follows the antics of Cowboy (a cowboy), Indian (an Indian) and Horse (what do you think he could be?) during a special day in their lives. It's Horse's birthday, and Cowboy & Indian decide to give their flatmate/father figure the gift of an outdoor barbecue. Unfortunately when a brick order goes haywire their house gets destroyed, resulting in a rather long series of moments that include sea creatures, travelling to the center of the earth, a giant robotic penguin whose only mission in life is to throw giant snowballs at woodland creatures and farm animals launching themselves into buildings. And that's only a fraction of what viewers are expected to see when watching A Town Called Panic!

Filmed using stop-motion animation -- with characters looking like something you'd by from a mom-and-pop model shop -- directors Stéphane Aubier and Vincent Patar (who both voiced some of the characters in the film) managed to create a film that looked like a couple of young school children set up a camera and went with their wildest imaginations; it's too late now, though, you can't go doing the same thing and expect to be called "original." The lovable trio travels through many settings ranging from music schools (where donkeys can play John Bonham-like drum solos) to the freezing Arctic filled with barracudas and loony pointy-headed sea monkeys. Yet it all seems to fit into place to create a wonderful movie that anyone can enjoy (permitting that you have kids who don't mind reading subtitles). The added character of Madame Longray (also a horse) as the music teacher brings together a quirky kind of romantic comedy to the show's trademark zany humor. (Seeing Horse and Madame Longray slow dance under a disco ball is a silly sight for viewers to behold.)

Perhaps the one complaint that I have with A Town Called Panic is that sometimes the humor is just too much. While the original episodes lasted around five minutes each the films 74-minute mark leaves no in-between space to catch up on your breathing. Believe me: you'll be laughing harder at this than at any of the recent Aardman movies. While the film is a must-see, I suggest pausing the movie halfway through to give yourselves about 10-15 minutes to let the oxygen back into your brain; you'll thank me later.