When was the last time I referenced Dead Space in one of my articles?  Oh who cares, because I just finished reading Dead Space: Martyr and, as promised, I am ready to blab.  Just to make this very clear, if you are interested in playing the original Dead Space and you have not yet done so then, due to some spoilage, right about here might be a good place to stop reading. 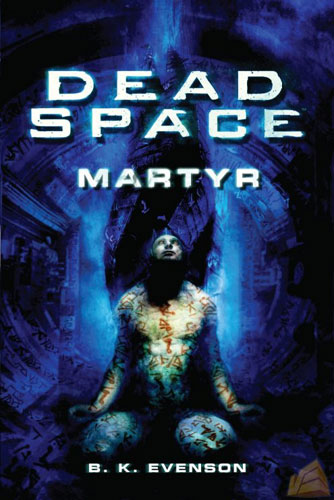 Altman be praised, was a phrase you have heard quite a bit if you’ve played EA’s hit space horror game Dead Space, but who the heck is Altman and why are these crazy people praising him?  This is the question that writer B. K. Evenson seeks to answer in Dead Space: Martyr.  It chronicles Michael Altman, the famed founder of the Unitology religion from the aforementioned series and tells the tale of the discovery of the original marker.  While the story is a little predictable, as prequels often can be, and it is not as action-packed as it could have been, I did enjoy it.

One of the best parts, in my opinion, of Dead Space was listening to and reading the wealth of backstory that they gave you through the audio logs and text logs.  With the motion comic series backing that up as well, there was more than just a little bit of thought put into how that whole mess went down.  One of the most interesting, and integral, parts of the story was the Church of Unitology.  B. K. Evenson, being no stranger to the horror genre having written several award-horror novels, took grand advantage of all that was there for him.  The book was chock full of references that either made me feel like I understood the fiction a lot better, or just facepalm.

Without ruining the whole thing for all of you fine people out there, the way everything turned out actually made me extremely excited to see what Dead Space 2 has in store for us early next year.  All of the big things that needed to be there made an appearance: People being driven mad, a giant twisty obelisk, hallucinations of dead people, necromorphs and even the plasma cutter made its debut.  There were however, a few things in there that either confused me, or simply made me shake my head.  I noticed throughout the story that I was hearing quite a few familiar names floating around.  Hammond and Ishimura were both scientists in the book, but were a key character and the name of the ship in the game.  Probably the biggest one that made me raise an eyebrow was a dream sequence at one point where the main character is very obviously dreaming about Isaac Clarke walking through the halls of the Ishimura.  While it’s not quite as bad as the first-person shooting sequence in the Doom movie, it’s still a little on the nose for me.

The action of the Dead Space game drops you into the fray in a matter of minutes and is a frantic gory ride from then on.  If you were hoping that this book was going to be the same, then it may not be the right one for you.  While the story is incredibly tense the entire time and is full of government coverups and double-crosses galore, the dismemberment action doesn’t start until about three-quarters of the way through the book.  If you loved going through the logs and watching the motion-comics, then you will likely enjoy this book.  If it is mainly the chopping and stomping action that brought you to the bloody halls of the Ishimura, then perhaps get a synopsis from a buddy.

When I started reading this book, one of the first things that I noticed was that it was separated into named parts.  Having been thrilled by the awesome first letter of every chapter reveal from Dead Space, I thought that surely there would be a nod in the form of some kind of message in the book.  Unfortunately, unless PCNDCHE means something that I’m just not catching, there is no message here.

For my official verdict on the book I am going to say: Rent it.

Since it is a book, I suppose this means that you should head out to your local library and see if they’ve got a copy of it in.  Or you could borrow it from a buddy.  While it was certainly worth it to me to purchase the book, it is not going to be for everybody, but may at least be worth a try.  Well, time for me to get cracking on Dead Space: Extraction.  Altman be praised!