HomeReviewsWaiting For The "Worms" To Bomb
by: kingbabyduck
0
Reviews / Video Games

Waiting For The "Worms" To Bomb

Like many of my fellow friends I spent most of my final year of high school social studies watching movies, doing rap freestyles (badly, mind you) and playing a little computer game known as Worms Armageddon. Although it was merely the demo that little game gave all of us months of nonstop entertainment. Recently -- at least on the PS3 -- a port of that classic game was released under the guise of Worms 2: Armageddon. After seven years since the last time I played it, the Worms franchise continues to be a blast.

It doesn't take a nuclear scientist to figure out how to play Worms 2; just kill the other worms on the opposite team by any means necessary. What sort of means? Well there are guns, bombs, flamethrowers, jackhammers, ninja ropes and sheep to name a few. There's also a fun air strike once in awhile, though those are best saved for the final smackdown.

There are three single-player modes: the Quick game, the tutorial and Campaign mode, and it's the latter mode that will have you losing days -- much less hours -- of your time. The levels vary from regular matches and races to the finish to puzzles and strategies to defeat just one worm. Some of these tasks may take a few seconds, whereas others will have you puzzled for days on end. (As of right now my Worms version of the B3 crew are stuck in the 20th Campaign mode, and Wormonic and KingBabyWorm are getting their asses -- or whatever it is worms have -- blown off.) Nevertheless the Campaign mode will have you kicking rear with a giant grin on your face. 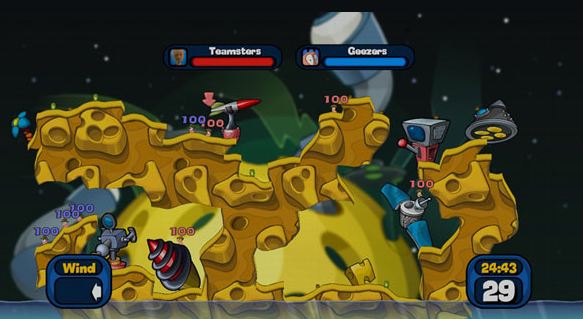 In regards to its multiplayer mode players are sure to have a blast battling it out with friends or complete strangers. You can play together as teams, or go against each other in larvae mayhem. With its mass foray of weapons and multiple ways to customize, the types of battles you can have are almost endless. Add on to the fact that there are six different types of matches, and you will find it hard to repeat yourself in regards to the matchmaking. On top of all that is the worm customization, where you'll have fun dressing up your characters and making them sound French, Scottish, German or some other silly language.

In regards to its online mode there are two issues I had. The first being that it might take you awhile to find an open game. I sometimes waited ten minutes before another player could appear and battle it out with me, and there were even moments where I just gave up and went back to single-player mode. The other issue in online mode is the lag. When I finally was able to battle it out online I noticed that it took almost half a minute for it to switch turns. Maybe an update will fix the speed of this, but I kind of doubt it.

Both the Xbox and PS3 versions are the same, but I have an issue regarding the PS3 version: its price. While the Xbox Live version is only 800 points ($10) the PS3 one costs $14.99, which is quite unfair considering that the Xbox version has also been out for over a year. Still that fifteen bucks will give you a good couple years of heavy gameplay and multiplayer fun. 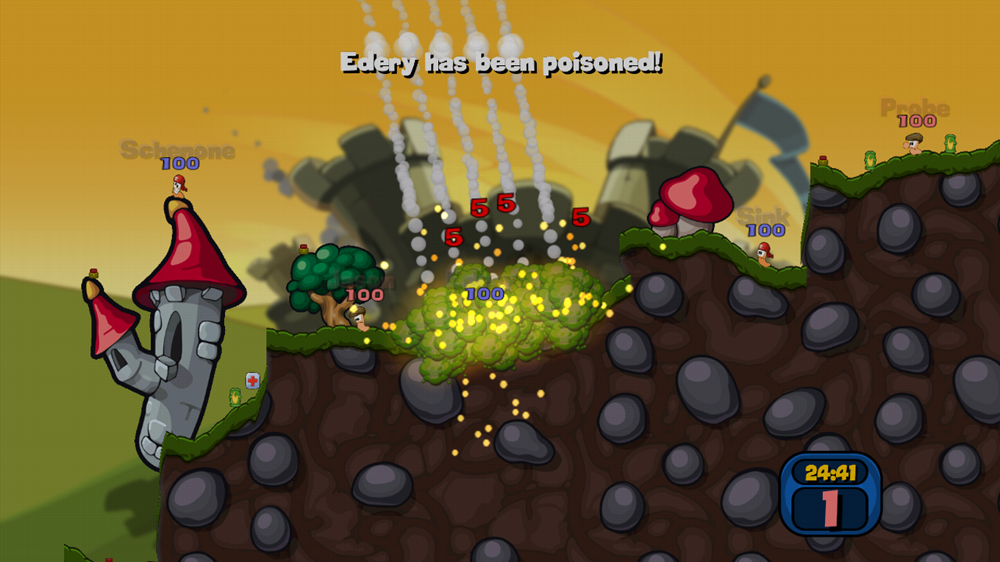 Worms 2: Armageddon is not just the best in the Worms series, but also one of the most fun games to play on any current console. You will find yourself losing many hours playing single player mode, much less the multiplayer gaming. Though the price might be a little high PS3-wise for a game that's technically been out for quite some time, you will find that every penny for Worms 2 was well worth it. Although they could've done a bit of a better job with its online mode.