HomePop CultureWhat the Chuck Are You Waiting For?
by: Hamsterman2049
0
Pop Culture

What the Chuck Are You Waiting For?

If there is one show on TV nowadays that combines spy action with plenty of nerdy nods, it’s NBCs Chuck.  In anticipation of the 4th season coming later this month, they’ve decided to release the 3rd season on DVD and Blu-ray today.  If you’ve been keeping up with the series, then I heartily recommend not only picking up the amazing 3rd season, but also watching the show’s return in late september.  If you haven’t yet had the pleasure, then read on and I’ll fill you in on what you’re missing. 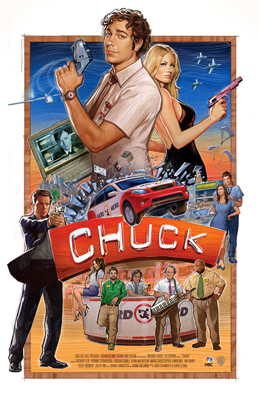 The show is the story of Chuck Bartowski, an employee of an eerily familiar electronics store called Buy More, who works at the Nerd Herd desk in the store.  One day, he opens an e-mail from an old college buddy and the next thing he knows, he has an entire database of government secrets, the Intersect, in his head.  The CIA and NSA both send their top agents, Sarah Walker (Yvonne Strahovski of Mass Effect 2 fame) and John Casey (Adam Baldwin), to protect Chuck as he uses his new found ability to access intelligence by simply looking at things.

Chuck is a brilliant mixture of comedy, action and nerdy references that should not be ignored by anyone who likes any of the above.  The show definitely had a rocky start with the first season being cut short by the writer’s strike in 2007 and it almost being cancelled after the second season.  Thankfully, with a huge amount of support from fans, the show has lived on and somehow managed to keep getting better with each season.  Not only does the show have a consistently hilarious cast of goofballs in the Buy More, but the spy action is enough to keep you on the edge of your seat.

I do recommend that if you are going to start watching Chuck that you start from the beginning.  There are a lot of incredibly fun twists and turns along the way that skipping ahead could very easily ruin.  Start now and, as addictive as this show is, you may even get caught up in time for season four to premiere.  The theme song “Short Skirt, Long Jacket” further confirms my theory that every show with a theme song by the band Cake is automatically awesome, with the other show being Mission Hill.

In short, this is one amazing show and is definitely worth a try by just about anyone.  With references to computers, video games and plenty of movies, it’s got a little bit for all geeks.  Don’t just sit there, go check it out and thank me later.

The Future: Made in Japan!