In February of 2009, I went missing to a lot of people.  Upon further inspection, they found me in my room playing Killzone 2 until my eyes bled.  Guerilla Games’ Playstation exclusive FPS is honestly my online multiplayer shooter of choice.  The mode of play dynamically changes throughout any given match, the graphics are dark and moody in all the right ways and the class system is enjoyable to level up and play.  You can imagine then, that I needed a change of pants when I saw that the sequel was playable at the MLG event this weekend. 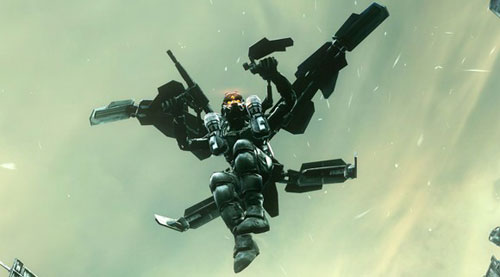 I will, at this point, admit that I beelined for Killzone 3 the second that I walked into the convention hall.  As a fan of its predecessor, I can tell you that they have kept in all of the things that made it great.  The single-player portion is still an adrenaline-filled thrill ride with a booming musical score and sometimes more happening on-screen than you could possibly take in.  Rico is back again and while I haven’t played the whole game by any stretch, it seems like he might not stare at a wall while you do all the work this time.

There were three segments available to play at the event: an on-foot sequence, a jet pack sequence and one where they give you a missile launcher.  The first was the typical Killzone stage.  It starts with you blasting the crap out of a bunch of helghast on a small flying ship, only to be shot down and have to go on foot.  Not much of a difference, other than the amazing new setting, which works great for me, because if a game ain’t broke, then don’t fix it.  That being said, you can’t quite keep a game exactly the same, which brings me to the second segment. 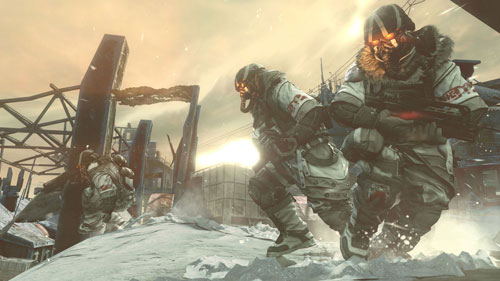 The jet pack is a feature not particularly new to first-person shooters.  The most important thing about adding it to a franchise that hasn’t had it yet is for them to make it their own.  The jet pack in Killzone 3 feels exactly as you would imagine.  While affording you more motility and the ability to reach far off places, it still retains the same weight that’s felt in character movement.  In the single-player mode, I can see how it will make traveling through the various sequences more interesting and will help to break up the action.  The real change it will bring though, will be in the multiplayer.

On each day I was there, they had to pry me off the multiplayer because it was time for them to pack it in for the day.  They’ve definitely refined the mode in a lot of fun ways.  In the previous game, you unlocked the various classes as you progressed through the levels and once you had a class unlocked, you could then start unlocking their various abilities.  In this build, it looked as though all classes were unlocked and you could level up the various special abilities as per your taste.  Personally, I greatly enjoyed the tactician, who had the ability to reveal players locations on the map for a time.  They also included a map where mech armor suits were available to hop in and wreak havoc.  Hard to take down as a person, but not impossible, this vehicular addition is welcome to the formula and is just the thing to add a little spice to an already quite tasty multiplayer dish.

As though all of that wasn't quite enough, the game was also playable in 3D at the event.  I could tell that a lot of thought went into the fact that this game was going to be in the third dimension and if there is one game I could think of where 3D would actually enhance the experience, this is the one.  I will say however, that when I jumped over to a 2D screen, it really didn't diminish the experience for me.  This leads me to believe that while it is a welcomed feature, it is not a deal breaker if you are not able to enjoy it.

There’s something that’s just satisfying about the little sound it makes when you successfully take someone down in the multiplayer.  I look forward to February of 2011 when I get to hear that sound many times again.  That is, unless they decide to give me an invite to the beta!  Please?

The Rabbids Are Invading Your Airw...