The Rabbids Are Invading Your Airwaves! 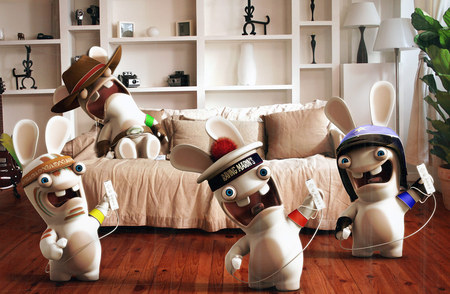 Everyone's favorite demented bunnies have just been green-lit for their own TV series, and the workings of it already sound like comedy gold!

According to several sources Aardman Animations -- the creators of the beloved Wallace & Gromit and Creature Comforts -- are currently working on a TV pilot starring the Raving Rabbids, the stars of the recent Rabbids Go Home video game and the upcoming Raving Rabbids Travel In Time.

"When the opportunity arose to work with Ubisoft on the Rabbids we leapt at it," said Aardman's Head of Broadcast Miles Bullough. "We absolutely love the characters and can’t wait to help bring them to a television audience."

The series is expected to be a hybrid of live-action and CGI, where the Rabbids would raise anarchy on real human characters.

"The not-so-subtle humour of the Rabbids has made them into icons in and beyond video games," said Ubisoft's managing director Xavier Poix. "Aardman perfectly understands that humour and we are extremely excited to be working with them to bring the Rabbids to a new medium and a new audience.”

No word on any television stations interested in those crazy hares, though Nickelodeon or Cartoon Network both sound like easy bets.

Watch the video below, and look me in the eye & tell me they don't deserve their own show:

Another Kingdom Hearts that isn’t...