There has been quite a bit of buzz around the tubes in regards to a little game called Enslaved: Odyssey to the West.  After having played the demo, I definitely intend to pick it up.  The reason for this plan however, is not completely because it was an awesome demo, which it was, but also because it reminded me of something.  It reminded me of the how awesome game developer Ninja Theory’s previous game Heavenly Sword happened to be.  So travel back with me to 2007 as I, in honor of Enslaved: Odyssey to the West, let you know about a game you may have overlooked. 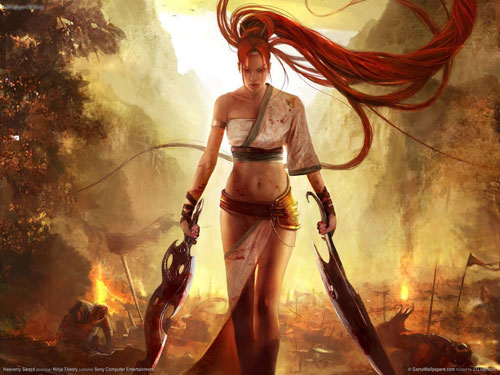 Heavenly Sword is a character-action game that is about a warrior-woman dealing with the curse of the blade that she needs to use to save her kingdom.  It features an excellent cast of interesting and, most importantly, well performed characters.  Actors include Anna Torv, of Fringe fame, as well as Gollum himself, Andy Serkis.  The motion capture for the game was top-notch as there have been few equals to the believable interactions between the characters.  Everything down to the subtle facial expressions are extremely well done.  To give you an idea, when I watched the pilot episode of Fringe, I had never laid eyes on Anna Torv, though I could swear I had seen her somewhere before.  When I got through the episode, I looked her up on the internet and a little lightbulb clicked on in my head when I saw Heavenly Sword listed.

The gameplay is your standard character-action faire.  You’ve got your heroine with a very large weapon, the namesake of the game, that has unbelievable strength.  You can do a heavy attack, a fast attack or a long-range attack.  There are also quick time events at various points during action scenes and boss battles.  While nothing in the game reinvented the genre, there were a few points that I really enjoyed.  In the sequences where you play as Kai, Nariko’s friend that she looks after, you get to shoot arrows at enemies in what was the first implementation of the PS3s sixaxis that I remember enjoying.

The game, while being admittedly quite short, was a ton of fun to play and see the story.  As I have been listening to all the buzz related to Enslaved: Odyssey to the West, there have been more than a few similarities to what I’ve heard and what I loved about Heavenly Sword.  If you love yourself some character-action, I highly recommend picking up a copy of Heavenly Sword.  If you enjoy that, then perhaps it would be wise to look into getting Enslaved: Odyssey to the West as well.  At the very least check out the demo for the game on your platform of choice.  There is much fun to be had.