How to Make An iPhone Killer -- The Dragonball Z Way 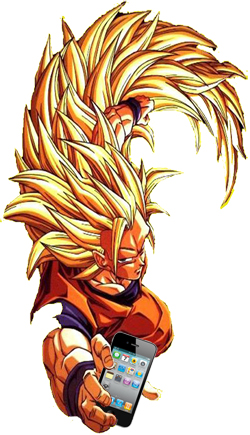 And that's all the phone manufacturers care about. Motorola, Nokia, Sony Erickson, Palm, RIM (Blackberry), Samsung -- they all want to be where Apple is. That's why they all keep announcing their own versions of iPhone killers.

All this in-fighting reminds me of Dragonball Z.

About 10 years ago, Dragonball Z was a fixture on Cartoon Network's Toonami block of programming. I would come home from work and my wife would be glued to the Toonami programming day after day, following the adventures of these little homunculus guys in search of balls. All I could figure out was that these guys constantly challenged each other to fights in order to gain the privilege of fighting somebody even bigger. The show was about that and, of course, balls.

Here, as I could see it, was the typical story arc:

Episode 2: Another one of the homunculuses challenges the villain to a fight. The homunculus loses.

I know that's probably simplifying the series all out of proportion, but that's basically the way I saw it. After a few months, I started wondering aloud why the homunculuses didn't all just get together in episode 1, but that's like asking why they didn't have more guards at the Watergate Hotel at the beginning of the movie All The President's Men. It wouldn't have made for a very long movie.

But the comparison between this Dragonball Z arc and the current smartphone wars is apt. Each of the cellphone manufacturers is acting like a Dragonball Z character -- talking big, but with little to show for all that talk. Most of them rely on the crutch of a free operating system to hold down expenses, but are saddled with a committee mentality when deciding how to use the materials they have at hand.

They're not interested in just beating Apple -- they want to beat everyone else as well. So when they finally bring out their great, new mobile handset, it gets talked about for a month, then immediately forgotten once a competitor brings out their own version of an iPhone killer the next month.

This market cannibalization even occurs within the same company. Remember that Motorola's original Droid phone was briefly the best-selling new smartphone when it was introduced in November 2009? That's less than a year ago. With more than a million Droids in the wild, that original device is already obsolete. Motorola has since brought out two more versions, the Droid X and the Droid 2, relegating the original to the scrap heap.

Correct me if I'm wrong, but all of these phones require a two-year contract with a carrier. With a new Android phone coming out every month, and new phones soon coming that run Palm's webOS and Microsoft's Windows Phone 7, aren't we becoming inundated with smartphones? The tech pundits fawn over every new iPhone competitor that comes along, but most of us don't have our employer buying every new smartphone that comes along.

So the iPhone competitors are following in lockstep with the classic Dragonball Z arc that I've outlined. Thus, the only way for them to come out with a true iPhone killer -- a mobile device that will truly beat Apple's iPhone in every category -- is to stop fighting each other and join together.

That's right. Create a smartphone consortium like Europe's Airbus. Decide on a single operating system. Get the exclusive on a super-sharp touchscreen. Put cameras in the front and back. Make app development simple and profitable. Make the hardware upgradeable. Create a universal port that feeds to USB, Firewire, HDMI and a format to be named later. Add GPS, gyroscopes, motion senors and proximity detectors.

But those features only bring the device to parity with the iPhone. This new consortium is going to have to do a lot more.

We're just in Episode 4 of this story arc. There's a lot of heartache for the iPhone competitors if they maintain this track. Can they fast-forward to Episode 13? Can they find the balls?

Disclaimer: I admit it. My wife owns quite a few shares in Apple stock. So why am I giving advice to the enemy? Just stupid, I guess.