In the original George Romero zombie flicks, the thing that would always take down the survivors was the sheer numbers of the living dead.  More recently, we’ve been introduced to the running zombie who is fearsome all by itself with the ability to chase you down added to its arsenal.  Put these things together and you’ve got what makes Dead Nation, a new release for the PSN, delightfully fun and difficult.  I got a the chance to play this game during the Major League Gaming event and I have to say that while it certainly gave me a hard time, it felt fair and I had a good time playing it. 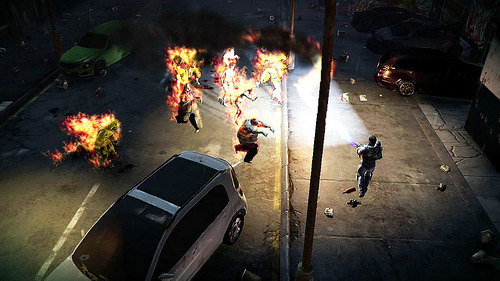 Walking down the street, a broken down car to your right, you hear a low moan.  Before you know it, you are being swarmed by upwards of 25 zombies all gunning just for you.  I’ll admit that for the first several minutes of the game, I was simply being slaughtered over and over again.  Once I got the hang of both the controls and the pacing of the gameplay, I did much better at progressing through the levels.  While, like in any game, you should really go at the pace that you most enjoy, I found that taking the levels relatively slowly worked pretty well for me.  As the undead swarm you, a melee attack knocks them back, but relying on this too heavily will very quickly end up dead.  There are ways however, extremely fun ways mind you, to execute a bit of crowd control.

Scattered across each level are various environmental elements that will distract and sometimes even destroy your aggressors.  Vending machines, when shot, will spill out cans and make all nearby zombies attack it instead of you.  Cars littered throughout the street can also be an effective weapon.  Shooting a car enough times activates the car alarm, which prompts the living dead to assault the car until it explodes, taking them all out with it.  These elements add an incredibly fun way to handle your progression and how each player approaches them can be very different. 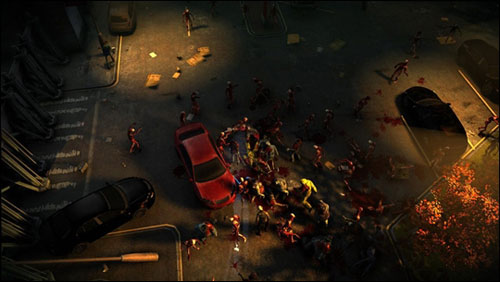 The music is a very appropriate mix of silence and heart-pounding tunes that changes depending upon the current situation you’re finding yourself in.  One thing I found very impressive was the number of different zombie character models.  While there were certainly repeats, as you can image there being in a game with over 25 enemies on the screen at once consistently, there was a very good variety in themes of zombie types.  Anything from football players to police officers to bikers, it kept the experience feeling fresh.  There was also a good selection of weapons and a progression system to help you spend the money you collect while slaughtering the undead.

While it may take a while for some to adjust to the difficulty level, if you are a fan of anything relating to the zombie apocalypse, this is definitely one game you should consider picking up.