Halloween has come and gone but there are a few things left to remember it by. One of these is Red Dead Redemption: Undead Nightmare. At ten dollars, this DLC is a steal for what it provides. Two new online games modes and a brand new adventure in single player filled with old characters, new challenges, and a whole lot of zombies. 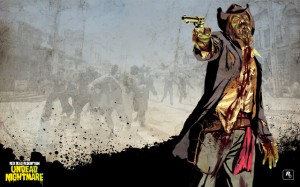 Right away this stuck out to me because the zed word was attached to it. I’m sure a lot of gamers felt the same way. I can assure you that the undead is not the only appealing factor for this DLC pack though. With something for everyone from multiplayer to singleplayer, and with over 1.7 GB to download, Rockstar doesn’t disappoint with this endeavor.

The new singleplayer story line is quite well written, just as the original story for Red Dead Redemption was. It starts in a similar way, too: With John having a mission to save his wife and son, killing anyone, or anything, that gets in his way. The story seems to be in an alternate timeline and picks up after John has been reunited with his family, but before being shot to hell by the US Marshalls. Now Rockstar could have taken the story straight from an old Romero film, something about radiation, walking dead, hide your kids, hide your wife, blah blah blah. What we got instead was a beautifully written tale about a man trying to save his family from a mysterious and supernatural threat.

To be honest, I would have preferred that Rockstar left the cause of the outbreak a complete mystery. The entire game is spent hearing from survivors that it was this or that, and knowing none of them are right. For me, the ending was a bit lax, the final level not hard enough, and lead up not tense in the slightest. But everything before the ending is an A+ in my book. Meeting with old friends and helping them to save their town, or putting two in their brain and making sure they stay in their grave this time. Rockstar really raises the bar for story telling with this game, and Undead Nightmare is no exception.

Story is great and all, but what about the action? The unadulterated fun of having a pack of flesh-eating maniacs bearing down on you as you pick them off with well-placed shells from your shotgun? It is here in spades. The zombies are spread into four archetypes: your basic freshly made corpse, shambling, biting, and scratching. Then you have your bolters, the fast type of zombies, this game goes the extra creepy mile in the design of these crazies, making them run on all fours as they advance on you faster than you can get your gun from its holster. Bruisers are big ol’ monsters with a charge attack that will knock you off your feet, and hit points to spare. Finally we have the retchers, radioactive zombies with a spit attack that explode upon re-death.

Not to mention all the undead versions of the animals roaming the plains, skinless cougars, headless coyotes; the bears and wolves haven’t changed that much, though they are still just as pants-shittingly huge and annoying as hell in packs, respectively. I also noticed a lot more goats all over the place, and they are all black in color, with enlarged horns. I am assuming it’s some sort of satanic symbol to go with all the rest of the hell-on-earth stuff. Along with the undead animals there are a few legendary beasts to tame and kill. From Sasquatch to ride-able unicorns that leave rainbows in their wake. There are plenty of new challenges that involve killing the undead in their various forms, and a slew of new weapons to do it with.

A torch replaces your trusty skinnin’ knife and is the perfect tool for fending off your brain-craving adversaries when you run low on ammo. Undead bait is a new thrown item that attracts the undead to where it is thrown, and when combined with dynamite has bloody results. Holy water is basically a fire bottle that only hurts zombies, the blue fire looks much cooler though. And the blunderbuss is a weapon that makes the explosive rifle look like a pea shooter. You can load it with anything, and that means anything you find on the corpses of the undead. Ribs, eyes, tongues, claws, teeth, all of these make excellent projectiles, and the blunderbuss will turn a tight pack of zombies into a cloud of red mist.

I spent so much time playing the singleplayer campaign that I hardly had time to try out the new multiplayer modes. Undead Overrun is your basic horde mode. Wave after wave of zombies, each level with a time limit that can be increased by opening a coffin that spawns with ammo inside. Up to four players can play and have to beat each wave by killing a certain amount of zombies to fill up a red bar. Downed players can be revived, and will need to be if you want to fill your undead death quota. Holy water acts a little differently in this mode, just try it out to see, you won’t be disappointed.

Land grab like king of the hill, something I am terrible at, I can admit it. Thus, I haven’t spent much time with it, but it can certainly be fun defending your territory from other players that will do anything to take it from you. There are also some new undead skins to use in multiplayer, including Zombie Rickets (pictured above). For ten dollars, Rockstar delivered a gem for anyone out there that likes to put the walking dead back to rest. I can’t recommend this enough to anyone who enjoyed the main game either, that same charm from Marston and the gang is still there, just a bit more.. grim. Now if you’ll excuse me, I have to get back on my unicorn and live in harmony, harmony oh love.

Such A Delightful Little "Squ...