HomeReviewsSpin a Yarn With Kirby
by: Hamsterman2049
0
Reviews / Video Games

Spin a Yarn With Kirby

In a wonderful turn of events, a little over a week ago, my girlfriend turns to me and says that she would like to help me buy a game.  After I awoke from the shock-induced coma, I instantly knew which game I was interested in checking out.  We went to the store and like a little boy in a toy store I pointed and jumped at Kirby’s Epic Yarn.  I have since played through the entire game and it has been a serious contender for one of my favorite games of this year. 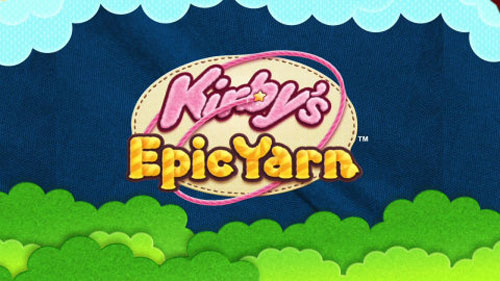 Games in general provide me with a great way unwind after a tough day.  Getting to sit down and dive into a completely different world is fun and takes my mind off other worries.  This being said, Kirby’s Epic Yarn is the first time I can decidedly say that a game is downright relaxing.  I’m talking sitting in a hot tub drinking a margarita relaxing.  This experience is due to a number of factors, not least of which is the absolutely beautiful musical score.  Nintendo is finally understanding the importance of an orchestrated score and has done a great job of capturing the feeling of each level.  While there are some tracks that are repeated, mainly in accordance with an event, almost all stages have their own distinct sound.  Most of the songs are incredibly laid back and include a lot of piano solos.

The gameplay also builds upon the relaxing feeling you get while playing.  In the game, it is impossible for you to die.  That’s not to say that there aren’t enemies, obstacles and a method for punishment if you get hurt.  If you fall in a pit or get crushed, you are carried to safety dropping beads you’ve collected from the level along the way and if you get hit by an enemy you’ll also lose beads.  You get scored at the end of each level for how many beads you collected, so the incentive is still there to do your best, but it’s also not the end of the world if you fail a couple of times.  It really created an atmosphere that was both low-pressure and performance-based that worked extremely well toward making sure that you’re having fun no matter what, but can have something to shoot for. 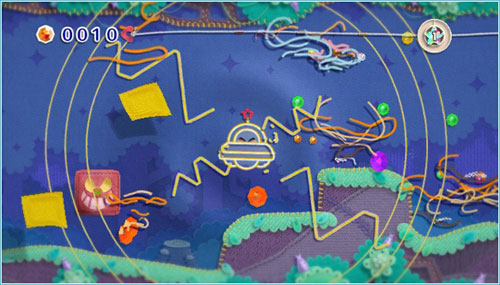 At certain points in some of the levels, Kirby will come across a glowing circle of yarn that will allow him to transform into different things: UFO, tank, snowboarding penguin and dolphin are just some of the awesome transformations he has in the game.  Did I mention there is local co-op multiplayer in this game?  You, playing as Kirby, and a friend, playing as Prince Fluff, can take on levels together, collect beads and take down bosses.

How have I made it this far without talking about the art style?  One of the most strong things about the game is how beautiful it looks.  Everything is made up of either patchwork material, fluff or yarn.  It looks great and is brilliantly worked into the gameplay.  You can pull zippers across a pattern to make a new one fall into place, opening up new directions and secret areas.  You can grab enemies by whipping out Kirby’s hand and curling them into a ball.  They took a great effort into making sure every last detail fit into this theme and it really helps to suck you into the world they’ve built. 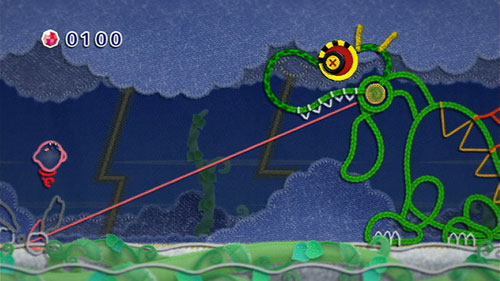 The game is set up quite a bit like the older Kirby games where as you beat each level, you unlock a single new one until you get to the boss level.  The bosses are both a ton of fun and a sight to behold.  Each are intricately designed yarn monsters that have unique patterns.  In each boss level, you can earn enough beads during the fight to unlock another couple of stages in your current land.  Probably the most fun part of a boss fight is where, if you get them stunned, you can literally fling them across the screen and into a wall.  It’s definitely one of those moments where you feel like you just stuck it to that particular boss.

In the main area of the world, there is an apartment building.  One of these apartments belongs to our hero.  As you go through each level there are various pieces of furniture and wallpaper that you can apply inside to customize your space.  The other rooms in the building lay host to a series of other characters that you can play various mini-games based in levels you’ve previously gone through.  While the settings in these games remain the same, the variances in gameplay make each one feel fresh and can keep the game going for much longer than just the story.  The one thing I have against Kirby’s Epic Yarn is that it’s not super long.  I will say that the length it did have felt appropriate.

So, the real question comes down to whether or not you should buy this game.  You should definitely play it, no matter who you are, but I’ll leave the major decision up to you.  My recommendation is going to be buy this game.  I have already gone back several times to play a particular level, just because it was relaxing.  It’s like curling up in front of a fireplace with a hoagie!