HomeVideo GamesPre-Game of the Year: Part 3
by: Hamsterman2049
0
Video Games

Pre-Game of the Year: Part 3

Science Fiction is a genre that has been explored quite a bit in film and television.  Traveling to new worlds, exploring alien civilizations and fighting against other-worldly foes is something fairly well-known to the video game crowd as well, but few games compare to the immersive and exciting Mass Effect series.  So, join me tonight as I spend a few minutes reminiscing about the predecessor to my next candidate for game of the year, Mass Effect 2. 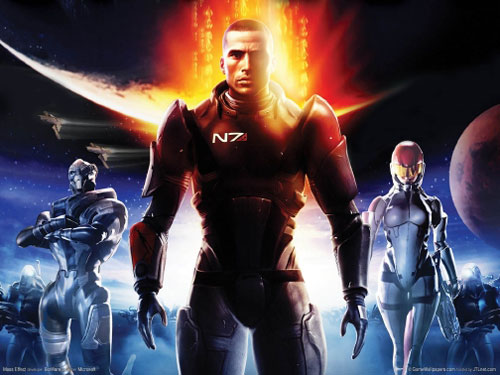 While Bioware has built up their reputation throughout the years as being a software development team that knows how to build a great narrative, it was not until Mass Effect that, I believe, they mastered their technique.  Customization is the name of the game and through their innovation, Bioware has made it so that each player gets their own personalized experience.

At the very start, when you load up Mass Effect, you not only have the ability to customize how your character looks and what gender they are, you decide on the backstory of your new Commander Shepard.  From there, you have the freedom to make several choices that will effect the entire universe.  Without giving anything away, there are several choices to be made that can greatly alter the end of the game, which makes for not only a fun game, but a highly re-playable one.

A feature that was quite welcome, though not entirely unseen by that point, was their morality system.  What makes this system unique is the fact that your decisions are necessarily good and evil.  You can make decisions under the paragon line which are your more polite and professional responses, or you can take the badass take-no-prisoner side with renegade.  As you make dialogue choices, points get dumped into either side which will end up affecting how people react to you in the galaxy.

A great narrative is all well and good, but if a game isn’t fun then it still isn’t worth playing.  Thankfully, Mass Effect falls under this category as well.  With a magical blend of third-person shooting and RPG elements, there is a lot of fun to be had.  There are several playable character types that all have their own abilities, there is a fun and diverse character progression system and lots of gear to customize your Shepard.

Even after all of this, Bioware came back with the sequel Mass Effect 2 and made it all better.  They took out the fluff to make the game more fun, they let you import every decision you made in the original game to maximize your immersion in the universe and they start the game off in such an awesome way that there is no way it is going to be put down until you’re done saving the universe once again.  If you haven’t played Mass Effect, then now is a great time, but save up some cash, because you’re going to want to follow it up with Mass Effect 2.