Ah, Monday... It just wouldn't be the same with out a new episode of the ESH podcast now would it?

In this week's episode of the podcast both NinJaSistah and Pandalicious share their takes on Ubisoft's latest entry in the Assassin's video game franchise, Assassin's Creed: Brotherhood 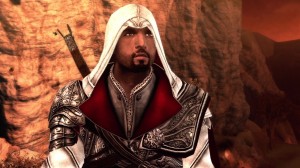 Life is a mystery...

The gals kick off the show with a tangent (or two) but quickly get back on track and jump into the story, the game play, and the bugs that help define what the ACB ride for the player is like.

From game load and buffering issues, to the depth of item collection, nothing about ACB escapes our conversation - which includes how hot of a lead character Ezio Auditore is. Not to beep our own horn, but for having a single topic, we came up with some really random titles for this episode that we didn't use:

So grab that fresh cup of awesome and enjoy ESH Podcast Episode 225: It's Like Extreme Makeover: Rome Edition.

Pre-Game of the Year: Part 3