HomeVideo GamesPre-Game of the Year: Part 5
by: Hamsterman2049
0
Video Games

Pre-Game of the Year: Part 5

Most games share quite a bit in common with the one that came before it and we’ve seen quite a bit of that with all the other titles in the Pre-Game of the Year line.  Oddly, with Red Dead Revolver, it and Red Dead Redemption actually have very little in common, aside from the obvious similarity in setting.  So, where did one of my personal favorite games of this year come from and why is it so wacky? 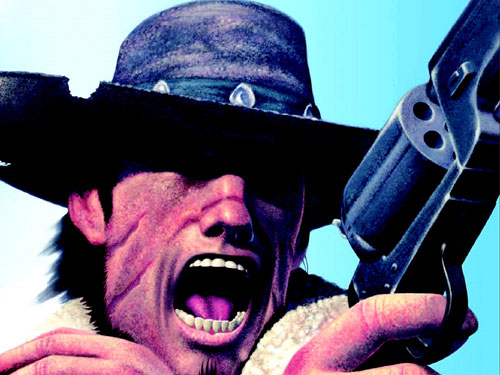 Red Dead Revolver, a wild-west-based action title by the fine folks over at Rockstar San Diego, was originally being developed by Capcom.  When Rockstar got their hands on it, they decided to redirect it in a more spaghetti-western style.  If you’ve ever seen any of the Sergio Leone spaghetti westerns, then you’ll understand the tone they wanted.  A little cheesy, with a silent and deadly hero that just happens to be good with a sidearm and out for revenge.  They even got lots of the music from said movies to play during the various gun battles that occur.  All that being said, they absolutely nailed the tone they were going for in this game.  The characters are absolutely nuts and they even apply a nice film grain to ensure it looking like you’re watching Clint Eastwood gunning some guys down.

There are some gameplay features that got carried over from this game into Red Dead Redemption.  The dead-eye and dueling modes are quite similar in this game.  What sets this game back, is the lack of variety in what you can do.  The entire game consists of going around and shooting people.  They also tend to soak up quite a few bullets by the end of the game.  It’s just a little weird when I blast someone in the face with a repeater rifle at point blank and it makes their health bar decrease by a millimeter.  Levels typically progress as follows: walk down a short road, kill a bunch of bad guys, big bad guy emerges and kill big bad guy.  While you spend the majority of the game as protagonist Red, they do offer several instances where you can branch out and play with a different character.

There is also a multiplayer mode called showdown mode, where people can shoot at each other in various locations from the game.  With the way the game works, this really just comes down to who pulled the trigger first.  The level of polish on the character models is quite good as each character has their own distinctive look.

When it comes down to it, this game is not nearly as good as Red Dead Redemption, but it’s not half bad on its own merit.  If you like spaghetti westerns, then it might be worth giving this title a look.  Just don’t expect to be playing anything close to my final pick for game of the year.  So, which one of these games is going to be my favorite for the year?  Check back and find out before the end of the year!