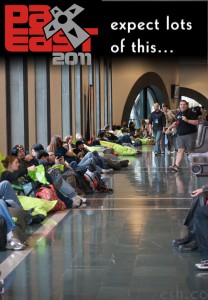 It's March 7th. GDC in San Fran is over. Pandalicious and I are on the East Coast, and while most days the fact that so many of our West Coast counterparts got to join in on some key learnings around the video game industry from the developers that define it would have me seething with envy, I know that PAX East (The Penny Arcade Expo) is 4 days away.

Now, what will PAX East have that GDC did not or E3 will not? (Besides the Land of ESH crew in attendance, that is.) Well, gamers for one. PAX has always been an expo open to the public...as long as you buy a pass that is. One, two or 3 day pass - that doesn't matter and is up to you - but the PAX convention has always been about a level playing field for media and consumers alike. No preferential treatment, same price merch merch for everyone, which is awesome. The video games convention by design brings gamers together, creates introductions and allows exhibitors to really engage their core audience while having a little fun at the same time.

From table top gaming and tournaments to Chiptune musical showcases and nerdcore artists like MC Frontalot and Jonathan Coulton, to panels on how to get a job in the game industry (including practice interviews and resume advice) there is literally something for everyone at PAX, and at PAX East the fun is but a hop, skip and a jump away.

So, if you have a few bucks left in your pocket, grab a ticket (single day passes are left for Friday and Sunday) and check out the geekiest event on the East Coast with the kids from the Land of ESH: NinJaSistah, Pandalicious and KingBabyDuck. We'll be there all three days, and are looking forward to it!