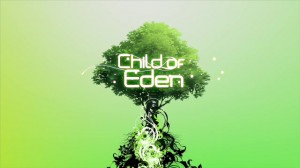 The first exposure I had to Child of Eden was at developer Ubisoft's press conference last year at E3. The trippy electro-synth-pop music that wafted over me as I sat in the theater instantly reminded me of the PS3 game Flow - one of my all-time favorite games by the way. I found myself thinking, Flow 2 only to be surprised and treated to the introduction of Eden. Fast forward 8 months and I'm at Pax East, where the game is playable.

The line was long to play the game, but if you are at the event this year I urge you to try it out. On the floor, Ubisoft is demoing the Xbox 360 Kinect enabled version of Child of Eden and honestly controlling the game is very natural.

In the game you fight varied types of enemies (in every hand's on I've tried of the game, I've only ever fought flower type monsters but there may be other flora that you take on in later levels) using your hands to control your weapons, area of attack and speed. It sounds complicated, but it actually is not. Think wax-off wax-on from the Karate Kid movies. While the gameplay itself can be broken down into a simplistic waving hands all over the place that changes the soundscape as you go along, what is not simplistic about the game is its graphics.

I have no idea what the frame rate is, nor do I care. The screen behind me was huge and there was absolutely no lag whatsoever while playing the game - an important thing as areas you need to attack and projectiles flying at you that you need to destroy fly fast and furious at times. The visual aspect combined with the saccharine-yet-subtle-at-times soundtrack makes playing the game addictive. It doesn't hurt that I like music and rhythm-based games, but I wouldn't recommend giving Eden a try just because it has a great musical element to it.

Child of Eden really needs to be seen, touched and played to understand. You'll have to wait until June 14th to get your hands on it in the US (unless Ubisoft drops a demo into the XBLive Marketplace) but I was able to snag some video for you in the meantime.