Dive Into This 3DS Launch Title

There has been a lot of discussion around the hardware of the Nintendo 3DS, but what of the software?  While we might not have titles like Ocarina of Time 3D and Kid Icarus: Uprising on the system just yet, there are still a few gems out there.  One you may be aware of, that I just happened to get with my 3DS, is Steel Diver.  An odd title to be first-party, there are plenty of things to like about this submarine-simulation-action title. 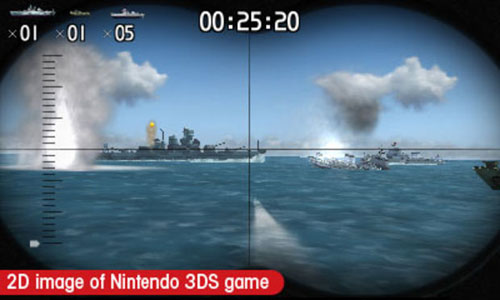 The first thing I want to say about this game is that I hope lots of others take their cues from how 3D is handled in this title.  It’s subtle enough that it doesn’t feel like it’s right up in your face, but there is still enough of it to be able to admire.  Depth is used quite well in the main gameplay with objects moving from the background to the foreground.  The periscope strike mode also manages to scratch the itch for some more action-based 3D.

As anyone who may have passed by me with their 3DS on in standby mode knows, I’ve been spending quite a bit of time playing this game.  Essentially, Steel Diver is a submarine action game with some interesting controls.  Instead of using the fantastic new analog stick built into the system to control your underwater vessel, there are various knobs and sliders on the touch-screen used to maneuver around the various obstacles it puts in your way.  Each sub has slightly tweaked stats and controls, making it a new experience each time you traverse the level.  Seriously, there were some stages that I failed miserably with one sub and passed like it was nothing with another.  That alone made the game last all the longer as it is a ton of fun to play through to see what each level is like with each sub.

There are seven missions in the campaign, but in order to unlock stages six and seven, you must complete all that precede them with each sub.  Each stage also has a time limit of between ten and twenty minutes, but don’t worry about that, because in the hours I put into the game, that limit never ran out for me.  As long as you press forward consistently, you should have plenty of time left when you reach the end.  Once you get to the end of a level, you get to experience a short periscope strike mini-game where you use the gyro sensor to swing around and fire torpedoes at ships around you. 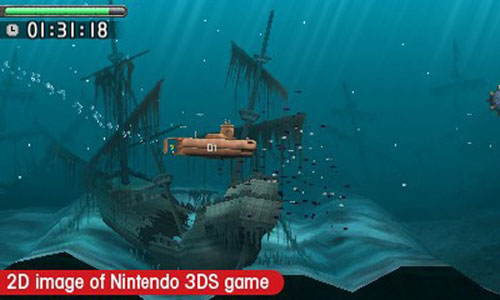 There are also three bosses to contend with throughout the game.  I would definitely say that they were the most difficult aspect of the campaign.  While, I won’t ruin what each of these bosses are specifically, I will say that the final boss is quite a challenge.  It’s been a long time since I’ve sat that far forward in my seat while playing a portable game.

In addition to the main campaign, there is a periscope strike mode, much like the one after each level, and a time trials mode.  In the periscope strike, the gameplay is exactly like the mini-game at the end of each level, except instead of there being a limited time, it records how long it takes you to sink every ship around you.  This mode is the most visually striking as there is a lot of depth used with the 3D and there is also a stage where you’re firing in a storm and the effects are quite beautiful.  It’s very gratifying to see your torpedoes fire towards the enemy in 3D.

The time trials mode takes the combat part of the game and removes it completely, simply timing how long it takes you to get from one end of a level to the other.  Specially designed to look like some sort of training facility, these levels are designed with simplicity in mind and it works very well for it.  The final mode, which adds the bit of multiplayer to it, is called steel commander.  To be honest, this is really just battleship.  You can use download play on another device to get some local multiplayer going and I’ve always enjoyed the game battleship since I was young, but it doesn’t add too terribly much to this particular experience.

With all of this, the game has lasted me quite a while and I think it’s still got some legs on it to go.  The way they’ve implemented the controls makes it a ton of fun to keep coming back and see how fast and accurately you can make it through each stage.  That being said, there is a bit of a slow start to it and if you’re looking for a fast-paced action submarine game, this is not it.  I would definitely give this one a try before you buy it, but I have personally had a great time.

Rift On Sale 'Til Sunday!