Alice in Wonderland is one of the most imagined and re-imagined stories ever told.  Some are charming and others are deeply disturbing, but none have ever been as gritty and violent as American McGee’s Alice.  Since the story is often seen as an innocent tale of imagination, it was refreshing to see it from the viewpoint of insanity.  Eleven years later, a sequel comes out to refresh us once again.  Alice: Madness Returns is definitely the follow-up to its counterpart from 2000, but does it live up to what it did for the story and, possibly even more important, is it any fun? 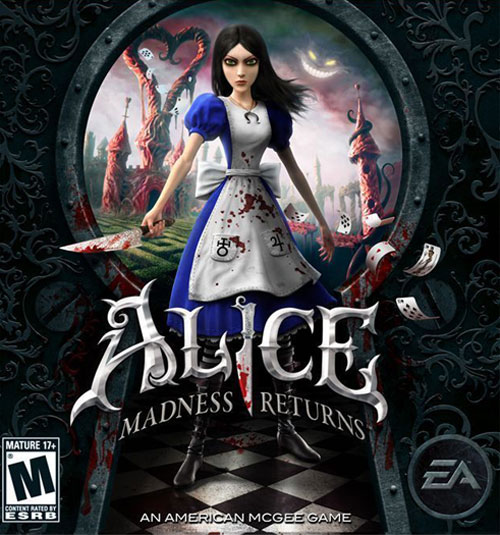 Wonderland is always great fun to visit and American McGee really seems to have his finger on it.  The story starts by letting you know that Alice has recently been let out of an insane asylum since her entire family died in a fire.  Her psychologist convinces her to go to wonderland and everything starts falling apart immediately.  While rafting on a river with the white rabbit, his eye suddenly explodes and the river fills with a black liquid and baby doll parts.  After drowning in the river, she awakens in her psychologist’s office.  After leaving the office, it doesn’t take long before she starts hallucinating again and ends up falling back into wonderland.

Without going too much farther into the story, each chapter of the game is centered around a particular character, or set of characters, in the Alice in Wonderland universe.  The simple formula for how it rolls out is as follows:  Alice is in the real world and wanders for a bit until she falls into wonderland, after some time the sections of wonderland becomes corrupted and Alice’s dress changes, Alice finds the character she was looking for and gets transported back to the real word.  A pretty simple formula, but it works pretty well throughout. 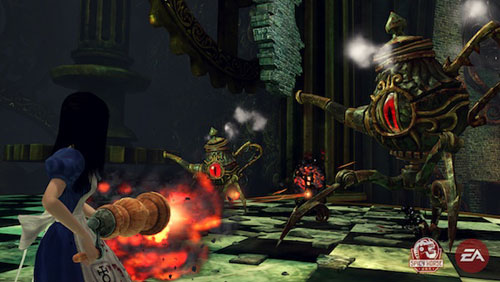 The game plays quite a bit like a mixture of a platformer from the early 2000s and God of War.  Most of your time is spent jumping and floating from place to place.  The rest are either puzzles or fighting sections.  Getting from section to sections tends to fall into the trap of “do this for me and I’ll open the door” far too often to the point that Alice comments on it at one point.  For the combat, there are an assortment of weapons that fall quite neatly into the normal archetypes.  You’ve got your melee, machine gun, grenade launcher, bomb and hammer to eliminate your foes, but they are very elegantly disguised as items you might find in the world of wonderland.

While the game is certainly a huge step up from its 2000 counterpart, it did retain a few annoying characteristics of platformers from that day.  There are often collectibles in games like these and almost always these collectibles have a purpose.  In this game, there is one set of collectibles that does absolutely nothing but earn you a trophy/achievement or two.  The platforming is often perfectly fine, but there were a couple of instances where it went amuck.  There was one in particular where I died for simply jumping too high.  The action, as well, can tend to be a bit repetitive as most of the puzzles, platforming and fighting patterns are revealed quite early and repeated throughout the game.

All in all, while it is by no means a perfect game, Alice: Madness Returns is relatively fun and definitely has its heart in the right place.  Anyone who is a fan of the original story and especially folks who played American McGee’s Alice will love this return to the twisted wonderland.  I recommend it as a rental for anyone and a purchase for those of you who want a free copy of the first game.  Hurry up, you’re late for a very important date with a fun Alice game!