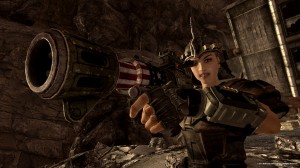 No..it's for real this time! Bethesda, publishers of the Fallout franchise announced today in a press release that the Lonesome Road add-on pack as well as two additional DLC packs – Courier’s Stash and Gun Runners’ Arsenal – will be available late September.

Lonesome Road is the fourth DLC pack to be announced for the Fallout New Vegas game. It was set for an initial late July release but was later pushed back. However today we – finally – got our confirmed date as well as some more goodness to follow the preceding week.

Fallout fanatics, circle September 20th and 27th on your calendars – in pen not pencil – because that's when you'll be able to own Lonesome Road, Courier's Stash and Gun Runners' Arsenal respectively.

Courier's Stash and Gun Runners' Arsenal will give players access to the other four content bundles that were only available through preordering the game:The Caravan Pack, Classic Pack, Mercenary Pack and Tribal Pack. Each of these packs will give the player unique weapons, apparel and aid advantages to keep things interesting. Gun Runner's Arsenal will give all those new unique weapons more impact with increased range, more mods, ammo types and more things to be discovered in the Mojave Wasteland.

Pokémon TCG Online: I Choose You