Pokémon TCG Online: I Choose You

When I was growing up, I needed braces.  This was all well and good, but I still had a few loose baby teeth that needed to come out before I could go through with it.  Instead of having them pulled by the dentist, which I was vehemently not in favor of, my parents offered me an alternative.  For every tooth I managed to pull out myself, they got me one pack of Pokémon Cards.  I’m not ashamed to tell you, well maybe a little, that I pulled each of those teeth out myself and got some decent cards in those packs.  Thankfully, I don’t have to pull out any teeth to play the new free Pokémon Trading Card Game Online. 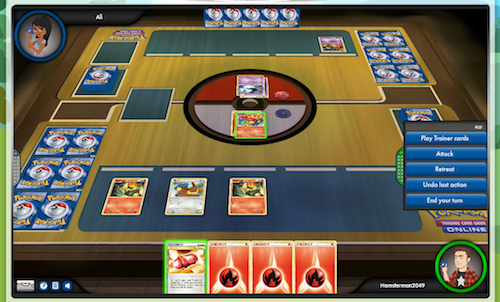 Free online games have come a long way over the years, but I still wasn’t expecting anything much when I saw the Pokémon Card Game was getting a web-based game.  I am thrilled to say that I am flabbergasted as how much I underestimated this game.  It launches straight into letting you create your own avatar.  Now, I’ll be honest, the choices aren’t extremely robust, but this is easily forgiven as you start the single-player mode called the Trainer Challenge.

Right off the bat, you can choose from three basic decks: fire, grass and water.  If this is sounding familiar to any pokéfans out there, I’m not surprised.  From there you have the opportunity to take part in a twelve match tournament with different rewards for each opponent you beat.  You can also go through and beat each set of opponents with the different decks for even more bonuses.

As you progress, there are seven more decks beyond the first three that can be unlocked.  There are also three different Leagues that you can compete in for even more unlockables.  On top of all that, there are achievements that you can unlock, such as evolving your monster twice or knocking out another player’s creature in one blow.  As if that wasn’t enough, I haven’t even gotten to the part where the game is multiplayer.

Once you’ve brushed up a bit on how this crazy game works, it’s time to play against some real people.  The game is still in beta, so there are a few features not available yet, like the ability to trade cards, but the multiplayer falls under two categories right now: practice matches and ranked matches.  As you can imagine, a practice match still involves playing against real people, but the stakes are not as high.  When you get into the ranked match, they start tracking your stats and putting you up, for good or bad, on the leaderboards.

Hard to believe this game is completely free, right?  Well, there are a few aspects that you can put some money into.  You can purchase some better clothes for your avatar to wear and some packs of new virtual cards, but that’s all I’ve found to blow your dough on.  Whether you’re a fan of the card game, or have been curious about it, this is a fantastic way to get in on the action without lightening your wallet.  The best thing about it in my opinion?  If you can’t see the six-year-old that’s trouncing you, you can pretend that they’re a poker champion.

Death Has Never Been So Cute! [Vid...