HomeVideo GamesIs This the Announcement Coming Next Week?
by: Hamsterman2049
0
Video Games

Is This the Announcement Coming Next Week?

So, a cradle for the 3DS that has a second analog stick.  Trust me, I know what you’re thinking, but let’s take a second, take a deep breath and break this down.  I’m not here to say that this practically confirmed rumor is a good or a bad thing, but it may not be quite what it looks like. 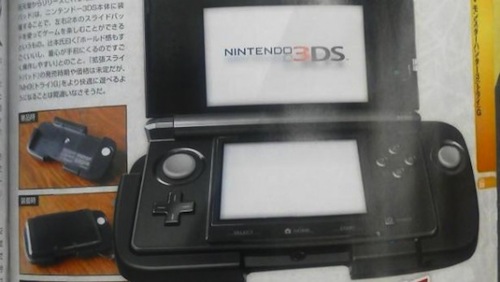 Being perfectly honest, it’s been a bit of a hard time for early adopters of Nintendo’s latest portable.  Out of the gate, there have been some relatively fun games and Ocarina of Time 3D, but not nearly as good a library as one might expect six months after a system’s launch.  Couple that with knocking a third of the price off the portable so soon after launch and I’ll admit, it’s been difficult to stay positive.

Nintendo immediately answered back with the ambassador program, granting those who paid some extra dough twenty free games.  Ten of them have been delivered and I am officially hooked on Balloon Fight.  Soon afterwards, Nintendo announced they were holding a press conference just before the Tokyo Game Show that featured the 3DS and the rumors began to swirl.  One of the biggest rumors was that they would announce a revision of the 3DS hardware to include a second analog stick.  Today, scans from a magazine surfaced proving that the rumor was almost true.

Instead of completely new hardware, it looks like there will be a cradle, which looks a lot like the one that comes with the device, which adds a second analog stick.  The other part to this rumor that calms me down a bit is that this is to go along with the release of Monster Hunter Tri G.  A release of a new way to control a game on a Nintendo console that is paired with a Monster Hunter game...  Where does that sound familiar?  Oh right, Monster Hunter Tri for the Wii.

When Nintendo released Monster Hunter Tri alongside the classic controller pro, it was a great opportunity for players to play the new game the way it was mean’t to be played.  Why could this be the same?  When it comes down to it, there were very few games, after the release of the classic controller pro, that were built with the peripheral in mind and none that absolutely required it, including Monster Hunter Tri.  Why could this be different?  Fundamentally, the classic controller pro changed very little aside from the layout of the controls.  Adding more shoulder buttons and a second analog stick very drastically changes how games could be designed for the 3DS.

Does this mean that there is an impending hardware update?  I have no prediction there, but my strategy at this point is to not jump to any conclusions until the press conference before TGS.  There are plenty of reasons why this would not happen, the foremost being that a second analog stick is not what the 3DS is missing and Nintendo knows this.  It needs games and the games are coming.  With Super Mario Land 3D, Luigi’s Mansion 2, Mario Kart 7, Resident Evil: Revelations and Kid Icarus: Uprising waiting in the wings, among others, there will be more than a few good reasons to get a 3DS.

When it comes right down to it, the second analog stick cradle could be one of two things.  It could either be a hint for what is to come for the hardware down the line or just an add-on that gets used occasionally.   We’ll probably have a pretty good idea on September 13th when the details are revealed.  In the meantime, I’m going to pick up my copy of Star Fox 64 3D on friday and play the crap out of it.  See you next week with a review!