Walking into my local Gamestop the other day, I inquired about the Nintendo’s new add-on for the 3DS, the Circle Pad Pro.  The reaction I received instantly startled me, as it was reminiscent of how I was treated when asking if Wii Fit was in stock back in 2008.  Shockingly, I was told that they were out of stock, but were expecting a new shipment in April.  I found this to continue to be the case at many other stores until I finally managed to snag one using the in-store pickup option.  Was it worth the extra work to chase down?  Read on to find out. 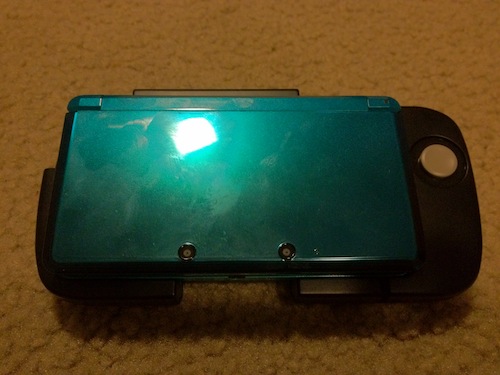 With a device like this, there are three main aspects to address: How it looks, how it feels and how it plays.  Let’s start with how the thing looks.   To be honest, it’s not nearly as bad as I was expecting from the pictures I saw.  If you have the black 3DS, then you’re in the best shape in the looks department.  Having the aqua 3DS myself, it definitely looks a lot more like it’s sitting inside of a giant cradle, but it still manages to not bother me very much.  From an outside perspective, I’ve had several people who are very familiar my 3DS ask me “what the hell is that?” while the Circle Pad Pro is attached.

Holding the two combined, the first thing you’ll notice is the extra weight.  While neither device is particularly heavy on their own, when both are together, you can really tell a difference.  This additional mass, in my opinion, does not hinder your ability to hold it and actually makes it feel closer to how much a console controller might feel.  It does, on the other hand, cut down significantly on the portability of the handheld.  It will no longer fit comfortably into any pocket and may even need to be separated while it is transported.  The smooth back paneling of the pad is well designed to form your hands into the position they should be in and feels quite natural.

The way the Circle Pad Pro interfaces with the 3DS is pretty impressive.  There is an IR sensor along the back of the accessory which lines up with the sensor on the back on the 3DS.  The plus side here is the lack of a need to actually plug in anything.  When you want to use it, all you need to do is push the your 3DS into the cradle and tell whatever game you’re playing that you want to use it.  The 3DS fits quite snugly into the Circle Pad Pro, and while I’ve never had this issue, they even include a wrist strap that connects to the 3DS on the off chance it pops out.  To power the device, it has a little panel that needs to be unscrewed and a, thankfully included, AAA battery is inserted.  While some could see this as an unnecessary annoyance, the fact of the matter is that it further helps to make connecting the device easier and eliminates any effect it might have on the battery life.

Currently in North America, there are only one and a half games that use this new accessory.  I’m counting the demo for Metal Gear Solid: Snake Eater 3D as a half.  The main game I’ve gotten to try it out with thus far is Resident Evil: Revelaitons Revelations.  Having played the first few chapters of the game sans Circle Pad Pro, I can say with all certainty that while I would’ve lived without it, having that second pad feels a lot more natural.  The second pad feels almost exactly like the other, so it’s easy to jump right in.  The response time is also quite impressive and I haven’t experienced any lag thus far.

Aside from the second stick, it also adds ZR and ZL shoulder buttons.  Since the accessory is decently longer than the 3DS itself, it had to replace the R button with one located on the Circle Pad Pro.  While that button functions quite well, it expects you to use the original L button, which is placed now in such a place that it doesn’t feel natural to reach.  This hasn’t been much of an issue in Resident Evil: Revelations, because the button isn’t used much, but could pose a potential issue in the future.  One other small issue is because of where the IR sensor is located and the need to hold the 3DS in place, it’s covering up both the stylus and cartridge.  Certainly not a deal-breaker, but having to take the 3DS out of the Circle Pad Pro, get the stylus, put it back in and then change the settings back can get a little annoying.

When it comes down to it, the Circle Pad Pro is not around because games can’t be made using one analog stick.  I’ve played several of the titles listed as supporting the accessory and I still had a fun, if a bit uncomfortable, time.  It does add a decent amount of weight to the handheld and mine looks a bit like a blue-billed one-eyed platypus, but it feels good and adds a few extra controls that respond quite well.  Somewhere down the line, this will be bundled with something.  Whether it be something soon like Kid Icarus: Uprising or something a bit more distant like Monster Hunter Tri G, my recommendation is to wait until this puppy not only has more games supported, but maybe gets bundled Rumble Pack style.