Video games as art has been a debate for quite a while now.  While the arguments for each side could be never-ending, the arguments of those who consider games as art has recently gotten a little stronger.  Currently in the National Gallery of Art is an exhibit dedicated to the art of video games.  At first thought, you might assume the exhibit is nothing but a grouping of framed concept art for a few games, but what you'll find upon entering is a well thought out exhibit filled with every aspect of how a game could be considered as art. 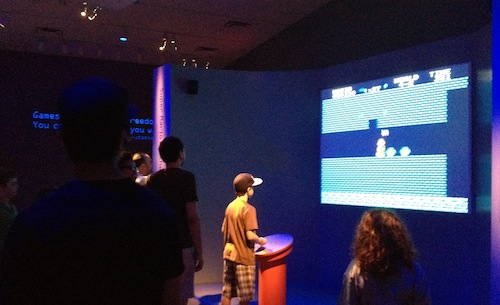 As you enter the Art of Video Games exhibit, the first thing you're greeted by is a giant screen playing a looping video of game footage.  The games shown range from the original Pac Man, all the way up to Mass Effect 2.  There was another video playing on a nearby screen with several game designers talking about their take on how games can be considered art.  I really appreciated that part of it, because the designers themselves get to have a very different perspective than a consumer, so hearing their opinion was a great experience.

In the first room, there were a number of installations that were particularly well done.  One of my favorites of the entire exhibit was a group of three screens that were cycling through video footage of real people playing games.  There is such a misrepresentation of how it looks when people play games from both advertisements and acting for movies and TV shows.  Actors flail around mashing buttons like every game is nothing but a quick-time event from God of War, which is not even close to the real thing.  Being able to see the subtle, yet profound, reactions that these people had as they played was a great piece for showing how immersed one can get while playing a video game.

In that same room, they also had a giant frame containing five screens with the words “Advances in Mechanics” at the top.  Each sequence would start with a game mechanic such as running, jumping or even cutscenes would come up on the screens.  Each monitor would then display how that mechanic looked during each of the eras of video game design.  Sometimes it’s hard to appreciate just how far even small things like these have come until you can see the progression side-by-side.  It was a lot of fun to be able to reminisce about how good or bad those mechanics used to be in their day.

Hanging all around the room as well, were concept sketches and drawings from games like Epic Mickey, Fallout 3, Starcraft II and Sonic the Hedgehog.  While these were the one part of the exhibit I was certainly expecting, they were still thrilling to get to see in person.  For a game enthusiast, having an original drawing of Kerrigan from Starcraft II or a concept sketch of a cutscene from Metal Gear Solid 2 sitting inches from your face is like getting to see an important historical document. 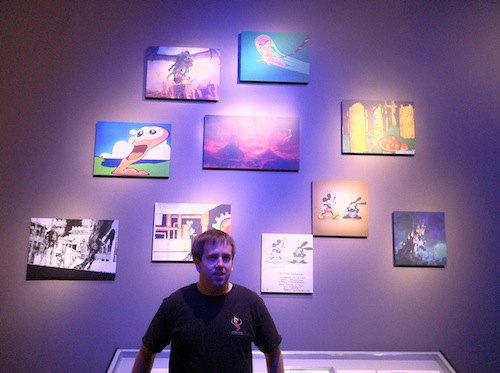 The next area focused much more on the history of video games.  They had a kiosk for several of the home consoles across time from the 70s all the way to the present.  Each space had the console, some screens with video from a few games on that system, and descriptions written for everything.  Similar to the mechanics display, it was great fun to see how games grew and changed as time went by all the way up to what we have today.

Now, what video game exhibit would be complete without a section to actually play the games you’ve been seeing?  In the final area, they had giant screens available to play some particular games.  The titles available to try were Pac Man, Super Mario Bros, Flower, The Secret of Monkey Island and Myst.  It was a great selection of games to get a grasp of how they can be fun, beautiful, immersive and hilarious.  It was very interesting to see how differently each person at the booth approached each of the games.  Some people would blast through to the end of the level in Flower and some people liked to explore.  One person might talk to everyone in the bar at the beginning of The Secret of Monkey Island and another might go straight for an objective.  Like enjoying a painting, there is almost always an original intention behind the piece placed there by the painter, but no two people are going to experience it in the same way.  The same is true for any game.  While I might search every corner for collectibles, someone else might blast from one end of the story to the other.

The biggest argument that needs to be settled before a firm conclusion can be drawn on the video games as art debate is how you define art.  Whatever your stance might be on the subject, the Art of Video Games exhibit at the National Gallery of Art does a fantastic job of defining the history, beauty and effect that video games have on people and if you are in the Washington D.C. area before September 30th of this year, you would do yourself a disservice to miss out on this spectacular exhibit.