One of the promises that Nintendo made when discussing the launch window for the 3DS, was that we would be seeing Kid Icarus: Uprising shortly after the system’s release.  As it turned out, unless the 3DS had an extremely long launch window, this was a lofty goal that Nintendo just could not keep.  Taking another full year to polish the game and make it perfect, it’s finally here and more than worth the wait. 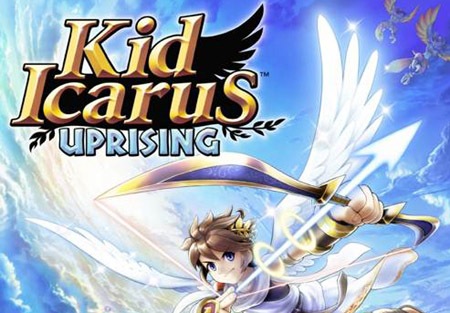 One of the main things that worried me about Kid Icarus: Uprising was that it would end up being short and shallow.  Thankfully, this couldn’t be any further from the truth.  With 25 chapters, the story will keep you going for quite a while.  Each chapter can be replayed as soon as it’s been finished and the difficulty can be scaled from 0 to 9 for more or less of a challenge.  For anyone worrying about the game being too easy, you can put those fears to bed.  At the start of each level, you can pay some of the games collectible hearts to increase the difficulty.  It also gives you a handy suggestion each time based on how you’ve been performing thus far.  Even at some of the lower numbers, let’s say around 5, I’ve found myself getting creamed.  If you happen to die in a level, it will automatically scale the difficulty down a bit for you.  With each of these chapters being anywhere from a few minutes to around 40, they stack together quite nicely for a lengthy adventure.

The story follows Palutena and Pit as they fight against Medusa and her generals who has launched an all out war on the humans.  One of my favorite parts of the whole game is the hilarious dialogue.  As you progress through each chapter Palutena and Pit are always chatting each other up and commenting on what’s going on.  Often these conversations are very tongue-in-cheek about the game and in one of the earlier levels, they actually have a discussion as to “what kind of boss” the main enemy of that stage is, trying to decide if mini-boss or final boss fit them better.  The story itself takes a lot from the original game and they even will show the sprite of the original character on the bottom screen if it was in the original game.  It’s both a great way to seem delightfully retro while specifically tickling the nostalgia bone in the fans of the NES classic.

Let’s take a second and talk about the music in this game.  I have not had this much fun listening to a video game in a very long time.  Each chapter has its own style and the music represents them all in the best way possible.  There’s a perfect mixture nostalgia and orchestral goodness baked right into each song.  If this soundtrack is made available for purchase, I’ll be all over that faster than you can blink. 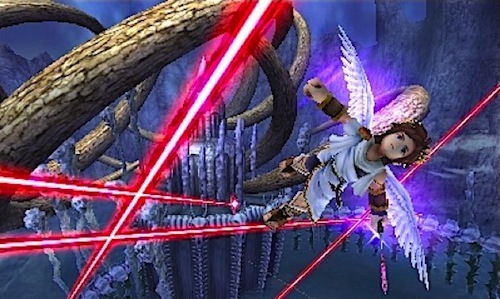 Each single-player chapter is basically broken down into 2 sections.  The first is a flying portion where Pit is being flown through an environment automatically and your main job is to gun down baddies along the way.  These portions of the game remind me of those theme park rides where they stick you in front of a giants screen and move your chair so that you feel immersed.  Especially with the 3D effect turned on, these parts of each chapter are some of my favorites both to look at and play.  You can reposition Pit on the screen with the circle pad, aim with the stylus and fire with the L-button.  The second part of each stage is ground-based and controls pretty much the same, with the main difference being that you also control the camera with the stylus.  As you progress though each chapter, killing enemies along the way, you earn hearts that can be used for a multitude of options.

If I had to list one complaint about this game, it’s the control scheme.  Don’t get me wrong, the controls work quite well and I always felt well-enough in control of Pit, but after a while it really does wear down your wrist.  Some of the levels are short enough to have this not even approach being a problem, but some of them go on long enough to make it a real pain.  This is why Nintendo packaged the game with the plastic stand, but I’ve never really managed to find my butter-zone for that either.  Honestly, it would have made a lot more sense for the game to be compatible with the Circle Pad Pro.

Unlockables are a huge portion of this game and help the replay value immensely.  Hearts, earned in each level, can be used to purchase and fuse weapons.  You can also donate them to Palutena and it will show a picture of her that gets closer and closer depending on how many have been given.  There is also a section called Palutena’s Treasure Hunt, where you can complete certain objectives to clears spots on a large grid, revealing a bit more of the picture underneath each time.  Those objectives can be as simple as just clearing a specific stage, to as complicated as clearing one of those stages in a certain time with a specific weapon.  Most of these objectives come with some sort of reward, usually being hearts, music tracks or weapons.  You can also collect the Idols of the game.  Essentially, the Idols are the 3D sprite for a whole bunch of elements of the game.  Acquiring these can be done in multiple ways with some options being collecting the physical Idol AR cards, paying Nintendo play coins for a shot at a new one and there’s even a special power that transforms enemies into Idols. 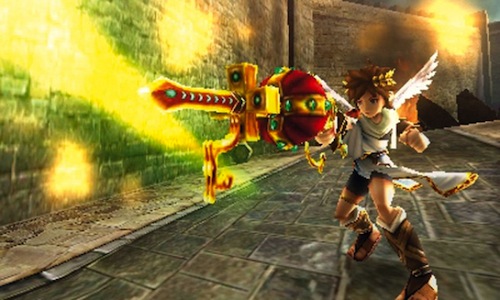 Even the weapons of the game are collectibles.  You can choose to pay for new weapons with hearts, find them in each chapter, or receive them as gems via the system’s StreetPass feature.  In all, there are 10 different types of weapon, each with different advantages.  Some are better at a distance, others shoot more quickly, and some of them just look really cool.  As you progress through the game, the weapons are what keeps you ahead of the continually progressing difficulty, so it’s always important to experiment and find the right weapon for your play style.  I love the variety of the weapons, not only in how they play, but how they look.  Each design has its own benefit and some are just built to look hilarious bolted to Pit’s arm.

To further customize your play style, there are a set of special abilities that you can find and unlock in each chapter.  These abilities can be anything including healing yourself, temporarily raising your attack, and jumping really high.  Each special ability is represented by a shape and you have a giant square with which you can place as many shapes as you can fit.  You can equip only as many shapes as you can fit inside the square.  This feature adds yet another layer of depth to an already robust system.

As I loaded up the main menu for the first time, I was instantly reminded of the team behind the game.  The developer for the game, Project Sora, is headed up by Masahiro Sakurai, who started the dev team just after the successful launch of Super Smash Bros. Brawl for the Wii.  The menu system for the game very strongly resembles the one from Brawl.  Simple and elegant, the menus are a joy to peruse and make it easy to get where you’d like to go.  The main options you’re given right out of the gate are solo and together.  Hitting solo takes you to the area where you can launch into any chapter, adjust your gear and practice with it.

Hitting together goes to the online multiplayer portion of the game and allo.  ws you to choose whether you’re playing with friends or strangers.  The multiplayer mode of the game keeps it going long after you’ve finished the game by giving you the chance to duke it out with complete strangers online.  The two modes of play, Light vs. Dark and Free-For-All, are exactly how they sound.  In the former, two teams face off against each other and battle and lower each others team health bar until one team has their angel appear.  Once the angel has appeared, if the angel is defeated then the game is over.  In Free-For-All, just blast everyone around you and try to earn the most points.  At the end of each match, depending on how well you’ve done, you receive a reward of hearts, weapons and sometimes special abilities.  The weapons and abilities you’ve earned from the single-player carry over into multiplayer and vice versa.  While I certainly got my ass handed to me on multiple occasions while playing these modes, they were still a ton of fun and add a great deal to the game. 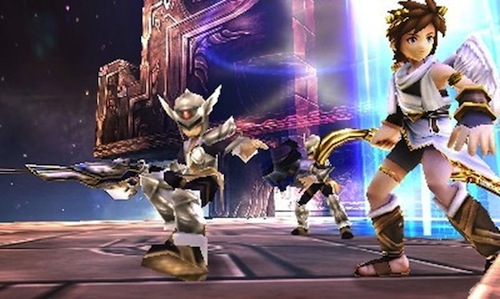 Despite some minor control issues, Nintendo has made quite a hit from Kid Icarus: Uprising.  With a delightful story, amazing music and more to keep you coming back for a very long time, this is truly the best game for the Nintendo 3DS.  If you own the system, then there is no good reason for this game to not grace your collection.  I’m not done reporting on this game though, so keep your eyes peeled for one more surprise I have in store.  Who says you can't teach an old franchise new tricks?  Or was that dogs?