The Last of Us Ambush Trailer Doesn't Stop the Excitement

Game developer Naughty Dog has been delighting us for years now with the amazing Uncharted series for the PS3.  When they announced a new IP, the bar was instantly set ridiculously high.  From what they’ve shown us thus far, it looks as though they won’t meet those expectations with their new title The Last of Us.  They will instead, yawn as they soar over those lofty expectations with their amazing-looking new game. 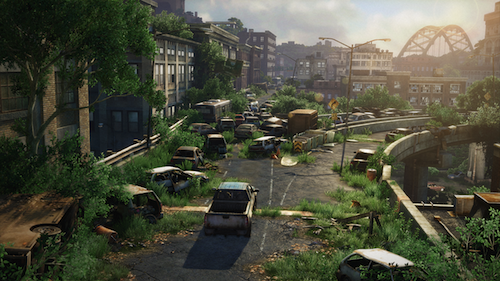 So far, the gameplay portion of The Last of Us has stayed pretty tightly under wraps.  Thankfully, this doesn’t mean that Naughty Dog hasn’t thrown us a few bones in the form of some amazing cinematic trailers.  This past week, they’ve released their second cinematic trailer after about five months.

This new trailer focuses more on giving us a glimpse of the world that Joel and Ellie live.  I love the tranquil beauty of the ruined world.  There’s something kind of gorgeous about the world full of overgrown grass and trees filled with abandoned cars surrounded by skyscrapers.  The video doesn’t give us long however, before the ugly side of the world rears its head.  The challenges that Joel and Ellie have to face seem to be everywhere and it’s not just the creatures that they have to fear.

Even with just these two trailers, my thirst for this game is growing.  I can’t wait to dive into this world, get to know the characters and experience the story of how this catastrophe came to be.  All that notwithstanding, the trailers and screenshots of the game are among the prettiest I’ve seen.  Do yourself a favor and check out this trailer below.

Hooked now?  Naughty Dog is going to be at E3 this year and ESH will be there as well.  If this is the kind of thing you’d like us to cover, head on over to the Land of ESH page on Facebook and let us know.