Rise and Shine is one tough mo-fo, and I say that with love. During my time with it at the Adult Swim Games booth I died more times than I could count. I witnessed my character, Rise, have his head blown off, burnt to a crisp, impaled, and electrocuted to the point of extreme frustration. But at the same time, I didn't want to give up. I had to keep going, for the sake of the citizens of Gamearth.

Let's back things up a bit: Rise and Shine has you play as a young kid named Rise, who finds himself in the middle of a war between Gamearth and the armies from Nexgen. You come across a fallen hero, and are given a powerful weapon named Shine who helps you on your newest journey. One step outside, and you are immediately pushed into a world of fire and mechanical nightmares. As a hero that's still very young, the task at hand for Rise is far tougher than you could imagine. 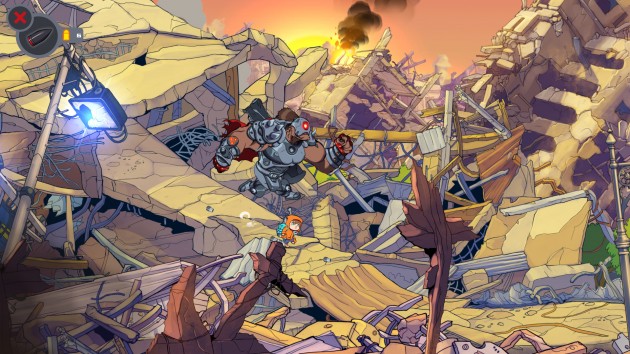 As I progressed through the level I earned a couple weapon upgrades, ranging from laser bullets to homing ones that can be controlled with your right C-stick. It's the latter one that's both a challenge to master and fun to watch unfold. In one instance a robot from Nexgen had me cornered, so with the homing bullets I was able to angle my shot properly, pull the trigger, and have the bullet travel directly to the robot's body. The result had the bot explode, clearing my path towards the safe zone.

Many times while playing Rise and Shine I couldn't help but compare Rise's journey to that of Clementine's from The Walking Dead video games. Here we have a child thrown into the worst kind of turmoil we can fathom. Everything is out to kill them, and if you are not careful your next move may be your last. Perhaps it's because I'm controlling a kid rather than some muscle-bound superhuman that the urge to not give up was so strong in me, and it's fortunate that — despite being increasingly difficult right out the gate — it's one fun platformer any gamer should experience.

Rise and Shine is due for PC in 2016, with platform releases hopefully following soon afterwards.