Of course I would play Duck Game. If a video game has any part of my online persona's name in it, I must give it a whirl. What I didn't count on was how addictively fun it is.

Created by Landon Podbielski Duck Game has 2-4 mad mallards face off against one another in a fight to the death. Using a variety of weapons, from swords and guns to bombs and nets, each round ends when only one duck stands. (However, from my experience with the game at PAX East, there have been times when no duck survives a round.) The game ends when a player reaches at least ten victories. 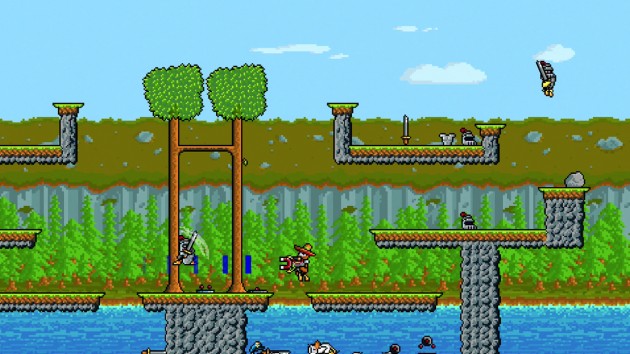 Duck Game is incredibly fast-paced, as you have to be on your toes at all times during the battles. There's no way to truly predict how a round will end. In one instance I found my sword-wielding duck going against one with a shotgun. At first I thought it was curtains for my duck, but as the other player came hurdling down I made the only attack I could with my weapon. I was left surprised when I saw that it was I that was left standing, as the players behind me let out an impressed cheer.

Podbielski has created a true multiplayer monster with Duck Game. Everyone who got a chance to play it — including myself — could not get enough of its fast-paced action and brilliant weapons. Honestly, who knew a game about ducks could be this fun and addicting?! (Well...ducks that aren't tied to a Disney property, specifically.) While all this was happening, across the way from the Adult Swim Games booth, a Halo tournament was going on. The crowd was loud, cheering on their favorite e-sport team to victory. If only they turned around and saw what was happening in this game.

Maybe one day Duck Game can join the e-sport ranks, but until then we can wait for the game to launch on PC next month (with console versions sometime later this year), which will also feature a single-player challenge mode and Level Editor. Anyone looking for a new competitive experience need no longer to look any further. As loony as it sounds, Duck Game may have what it takes to be an unexpected hit for Adult Swim Games and Podbielski.