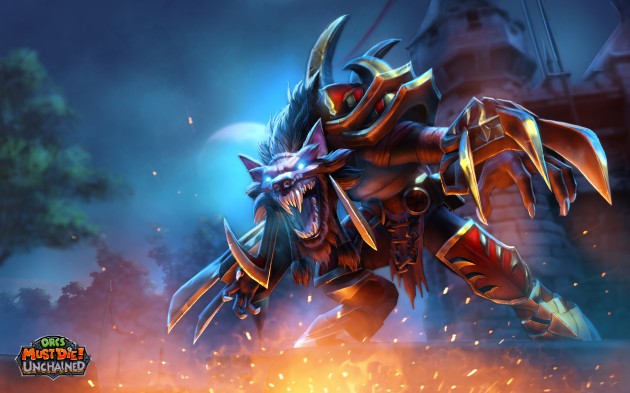 I spent some time playing a bunch of PC and mobile titles at PAX East this year. This is something a bit out of my comfort zone (typically, I’m a strictly console kind of girl when it comes to gaming) but allowed me to go hands-on with Orcs Must Die! Unchained from Robot Entertainment.

The game continues the Orcs Must Die! franchise and is a player versus player (PVP) capture-the-castle kind of game. (They call it Fortress Siege, I call it capture-the-castle. Same diff.) Players go mano-a-mano always balancing attacking/defending with the goal of wiping out their opponents and capturing their stronghold.

The game (currently in closed beta) has you the player surround yourself with minions – all varied in skill and speed – that you leverage to take advance on your opposition. My team of 5 took on another team of heroes for what felt like a short time, but only because the gameplay is very fast-paced and extremely fun. 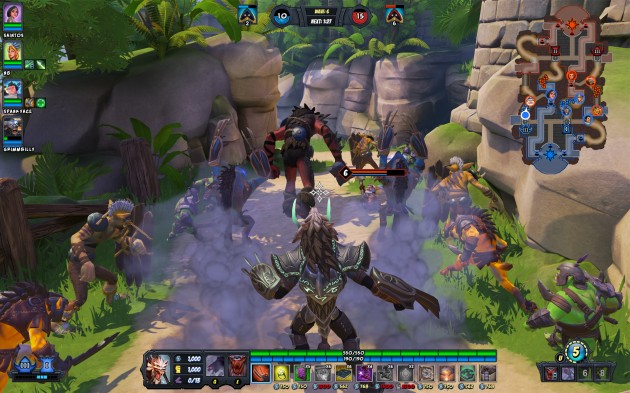 Ian, one of the game designers walked my team through the basics of selecting and upgrading minions, which are released in timed waves, and are crucial to follow into battle and not lead into battle. (A point which ultimately lead to my doom towards the end of my hands-on time.) On your heads up display (HUD) is a map overlay of the fortress you are trying to take over that shows you where both you and your opponents are as well as their minions. It even gives you a simple visual cue when characters are engaged in battle, and a simple meter at the top the screen indicating the overall power/health of the opponents as well.

In order to slow down would be attackers, your team must set traps to slow down and help impede the progress of your enemies, all while making sure to not fall prey to traps when advancing on the enemy camp. While at first the amount of information on the screen that the player uses to customize and upgrade their minions or customize or swap out character abilities initially feels daunting, feels almost second nature after a few minutes of actually playing the game.

There are a bunch of heroes the player can choose from, each with unique special abilities that fit just about every game play style preference out there. Everything from brute force, to ranged attack and shield are represented in the roster with the wicked sense of humor the Orcs franchise has become known for. You must pick your strategy early on and respect that sometimes running away from a fight – to pick up more minions – is a better choice than staying in a fight that ends with you dying, and waiting 35 seconds to respawn. And in all honesty, the respawn time after dying was the only frustrating piece of playing the game, and that’s a small gripe to have for sure.

OMDU is an online-only multiplayer PC title that will also be coming to PS4 – and for those itching to get in on the fun a bit early – the next phase of its PC closed beta kicks off on March 23rd, so sign up already.

Just in case you forgot, Orcs really must die.