Playing RONIN at PAX East was like revisiting a few recent titles in my past library. A mixture of Mark of the Ninja and SuperHOT starring a female assassin that reminded me of a certain dullahan from Durarara!! Tomasz Wacławek's creation is filled to the brim with attitude and cunning gameplay. It's how the different styles from these different games are blended together that made the whole demo experience truly unique.

RONIN has you take control of an assassin whose father was murdered by his former compadres. When she takes up the sword, bloodbaths and glass-shattering mayhem follow. As you crash through various headquarters and sabotage each of the computer mainframe systems the men in black will come and mark you for death. However you can have the upper hand in almost every situation, thanks to some quick thinking and an attention to your surroundings. 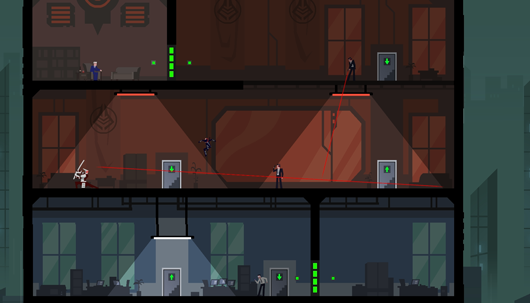 When you are discovered by security their guns aim right at you, with scopes bright red to show where they plan to shoot. Once this occurs the action freezes, in which point you'll need to move to another place where the bullets won't pass through you. You can try to hide in any nearby shadows, or you can attempt at being a total badass and land on a nearby enemy before shoving your blade through them. It's not as easy as it sounds, though, as there will be constant sacrifices that will need to be made. On one occasion I found myself juggling between different enemies in one room, slowly crossing each of them off my kill list for a few minutes until all were dead. (Believe me when I say I died countless times until I figured out a proper pattern.)

Devolver's RONIN is one challenge after another, and if this is what I experienced in the earliest levels then I expect that the rest of the game's difficulty to be even tougher. With fifteen missions to partake in and a half-dozen of your father's backstabbing buddies to take care of this is one assassination title that I'm sure many gamers everywhere will want to take a stab at.

RONIN is due for PC, Mac, and Linux later this year.