Old-school game difficulty has been making a comeback these last couple of years, especially in such titles as Dark Souls, Hotline Miami and The Binding of Isaac. This year Dodge Roll will be throwing its grenades into the ring with their first title Enter the Gungeon. From what I witnessed at PAX East in their booth, this title is cruising for some gamer bruising.

Enter the Gungeon is set up as a randomly-generated dungeon crawler, with no two game experiences being alike. As you run through each area you'll be grabbing new weapons, shooting enemies, and evading all hazards that are thrown in your way. If you die, you'll need to start right at the beginning again. There are no checkpoints, no helpful hints, and no strategizing enemy takedowns. Lose, and all that you worked towards to will be long gone. 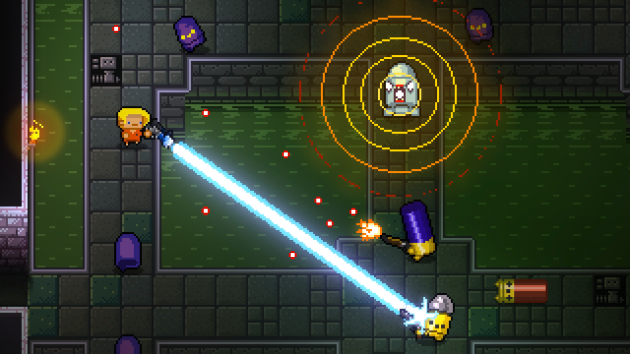 The first thing I tried out was the game's Tutorial section, which is taught by the ghost of a long-dead warrior. Here I learned the importance of cover, which can be achieved by flipping over nearby tables. The other thing I learned quickly was to never stay still. Movement is your only other defense, as one hit from an enemy can cause huge damage. After the tutorial I jumped into the first level, filled to the brim with enemy bullets, fire, and some pretty sweet weaponry to collect.

Many times I bit the dust while playing Enter the Gungeon, but even when I had to start all over again I felt what I learned in my previous experience was as surprisingly educational as an action-packed video game could get. Even though there is no way you can strategize how to overcome a level you can still learn enemy tactics such as how they attack and when the best time to strike is. I especially loved the kinds of new guns I came across, especially the firepower they brought to the table. Call me old-fashioned, but watching an enemy get blown away with a shotgun in this game is quite a fun sight to behold here.

Enter the Gungeon is due to be released later this year for PS4, PC, Mac, and Linux. Those looking for one sadomasochistic bullet-spiller will no doubt get their jollies from Dodge Roll's debut game.