We are basically a quarter into the winter season. Anime is back with some new hits, and some past successes. Although I feel that this is a weak season, I have picked up and stuck with a few new series. 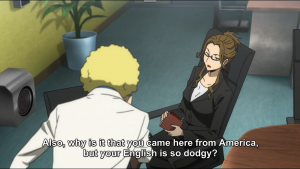 I never expected Durarara to return, but you never know with anime. Durarara's return means an even bigger cast (for real, this is the biggest cast of characters in anime), more crazy supernatural happenings, and a lot of chases. If any other anime had so many characters and plotlines to juggle at once, it would be a mess. Durarara not only makes the best of the mess it's created, it does so skillfully.

There are so many shows about humans and their relationships with shrine gods (No, seriously!), but Kamisama Kiss (or Kamisama Hajimemashita) stuck with me, and I loved it enough to want more. Kamisama is cute, fun, and somewhat emotional. That's perfect for a 30-something male like me. 😉

Some have called it dumb, while the people in my camp call it awesome. Aldnoah Zero is about the war between the humans of Earth vs. Mars. Specifically it's about Inaho Kaizuka , the uber-smart, uber-talented high school student turned mecha pilot. A lot of big developments happened in the season 1 finale, and that all gets explained in this season. I will keep all the developments spoiler-free. What I will say is that there is more crazy Kataphrakt battling in this season. You can always expect some crazy things to happen in Aldnoah.

Garo! Garo!! I've never watch the live action series, but I was still interested in watching anything Garo. It seemed like a tokusatsu show I could really get into. The anime is really good, and the first half of this season was quite the cliffhanger. The status quo has changed, and I definitely was dying to know how things returned to anything close to normal.

We're finally in Egypt! JoJo's Bizarre Adventure is all I could want in an action-adventure series. It's very funny. It's very gross. It's very surprising. It's very bizarre. So the JoJo's crew will finally face Dio, but not before battling another gang of strange stand users. JoJo's is magnificent. If you aren't watching it, I will never stop convincing you to.

I always watch at least one short show a season, regardless of quality. The quality of these shows has actually improved a bit, I think. Comical Psychosomatic Medicine takes place in a doctors office as they tell you about medical issues. These discussions go off in crazy directions, naturally. I think this is a good way to spend 3 minutes of your time.