All grand things must come to an end, and for CD Projekt RED's Witcher series, that time seems to be now. So how does Geralt of Rivia end this magical journey of his? Simple: with a fiery bang, in The Witcher 3: Wild Hunt.

Taking place after the events of The Witcher 2: Assassins of Kings, Wild Hunt has you once again taking the twin blades of Geralt as you seek to search for Ciri, an ashen-haired former student of his whose Elder Blood can bring about the end of days. As you progress through the lands you'll find evidence (or lack of it) in regards to the young warrior's whereabouts, each new clue bringing you closer to her coordinates. What's more: the deadly forces known as the Wild Hunt are also on her trail, hoping to use Ciri for their own catastrophic means. 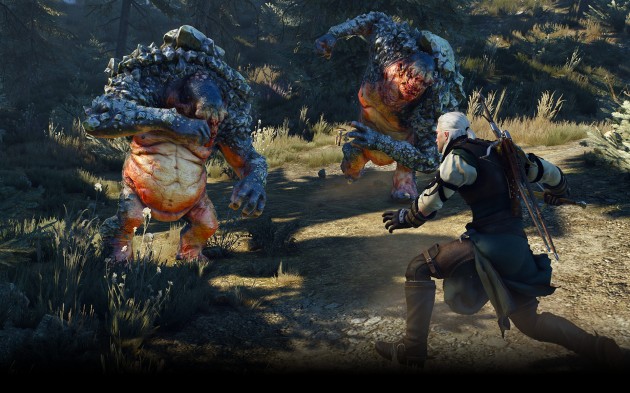 Of course, these clues aren't just lying around for Geralt to find; they are given to him after certain tasks are completed. Finding the Baron's wife and daughter, dealing with an ancient spirit trapped within a tree, rescuing an old friend, putting on a play, and finding a missing stash of gold are just a few of the quests that will be handed down to Geralt that will lead him towards Ciri's location. And trust me: there's almost never an easy path to complete these goals, and if there are dual choices to be had you can expect some pretty bittersweet outcomes plopping down from either one.

Side quests will arrive as soon as you arrive in town or once a main quest has been completed. Taking down tyrants, searching for missing persons and criminals on the loose, readying up a cabaret, a game of cards known as Gwent and even going a couple rounds in either bareknuckle brawling or horse racing are just the tip of the iceberg of what The Witcher 3 has in store. These can lead to you earning some extra coin, some nice perks and items, and — in some cases — a little heavy petting. (It wouldn't be The Witcher without some steamy romance, after all.) 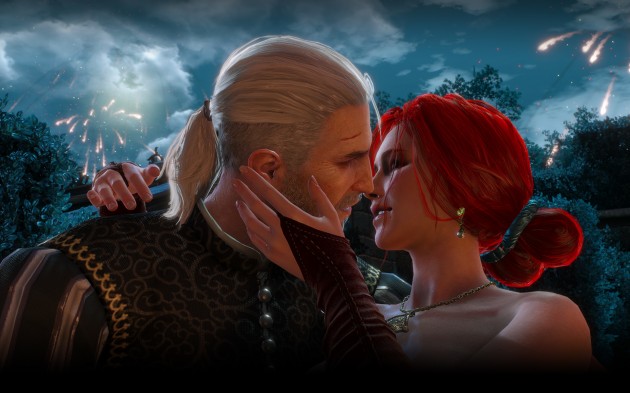 Taking on these quests do take a lot out of you, as their duration can lead to either a few minutes to even a couple hours. Some of the longer ones I'll admit do tend to drag on for a bit, especially when it involves having to travel far and vast lands. (Thank the gods for Fast Travel, or you may spend half of the game either on foot or horseback.) It's a minor complaint, one that merely caused me on some occasion to groan and utter, "Get on with it!" in Pythonesque fashion.

As in previous Witcher games Wild Hunt will have you leveling up Geralt as his travels take him deeper into the unknown. You'll be able to boost the power of your Witcher Signs, lengthen your health bar, and even learn a couple new fighting styles that will help when you are in battle. It takes a good amount of time to level up, and when you do you might be only able to add just one or two upgrades, depending on how many points you are given. 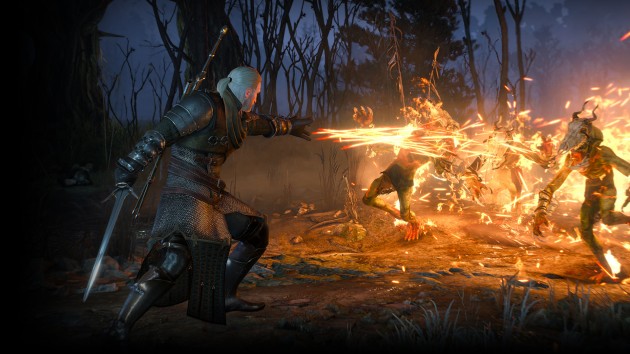 The first thing I noticed about The Witcher 3: Wild Hunt was how gorgeous the worlds were. Novigrad and the Skellige Isles seem to go on forever, with mountains so far and high it almost looks reachable. Traversing through the fog of No Man's Land always leaves you with a creepy vibe, especially when you have no idea when a group of Drowners are planning to jump you. The way the shadows form from the trees and animals and how the environments seem to change as time goes by is quite the majestic thing to view. Even the characters — from Geralt and Ciri's facial scars and the scruffiness of a warrior's beard to the way one's clothes flap calmly in the softest winds — are so incredibly rich with detail, it's crazy.

This, however, leads me to a common problem I've come across in the game, and that is the appearance of some pretty bothersome (albeit funny) glitches. During my play-through I noticed floating dwarves, NPCs being nonexistent and then simply fading into the scene, monsters stuck in walls, and even Geralt missing certain limbs that left him looking like a scruffed up Rayman. While a patch is currently on its way to fix these, it still raises an eyebrow towards the fact that these issues exist, causing a certain thrift in the game's immersion process. 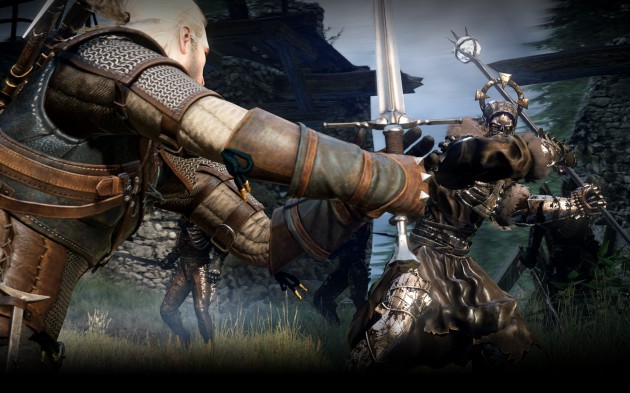 As Geralt, running into combat is quite the spectacle to witness. Whether he is merely using his fists or slicing down enemies with the sharpness of his blade, our witcher lead knows how to drain blood in all the right places. The very first time I saw him slice a soldier in two left me with jaw wide open and thirsty for more action. Setting enemies on fire or blasting them away with telekinetic power is incredibly satisfying to watch, especially when you've cornered a few of them and decide to flame on.

In some cases you'll be given the chance to play as Ciri, with her skills seemingly besting even Geralt's. When taking on henchmen her talents are quite ridiculous, with one-hit kills happening almost every time. (One scene where she and Dandelion are fleeing had a spot where countless henchmen appeared, leading towards one hilariously large body pile in the long run.) Taking on beasts of nature can be a tad daunting, as she lacks the more powerful Witcher's Signs that the male lead has to protect herself. Still, strength-wise she can easily stand toe-to-toe with the head Witcher himself. 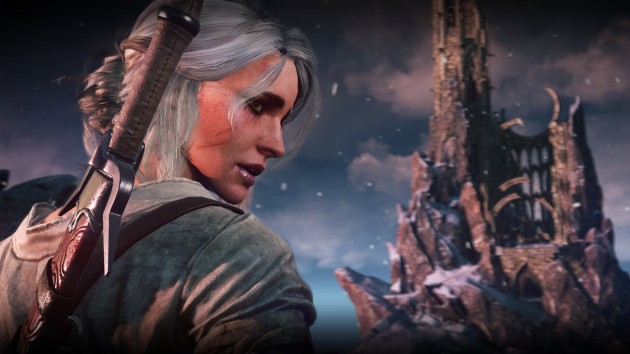 Not only does the game look and play fantastically, but it sounds beautiful to boot. Its score, composed by Marcin Przybyłowicz, Mikołaj Stroiński, and Percival, knows how to set the mood with the finest classical and folk tunes. The drums bang loudest during the heat of battle, whereas the plucking of harps and mandolins signals either a celebratory moment or one filled with the deepest of passion.

While the voice acting is also incredibly convincing, I couldn't help but think that Doug Cockle's performance as Geralt ran a tiny bit flat in some areas. I get that Witchers are somewhat emotionless, but even during some of the more heartfelt moments of the story I felt that even a slight tone of consideration could've been presented in his voice. The real showstopper belongs to Jaimi Barbakoff, whose Triss Merigold was filled with sadness and mental exhaustion from all the tasks she had to complete to save her friends. 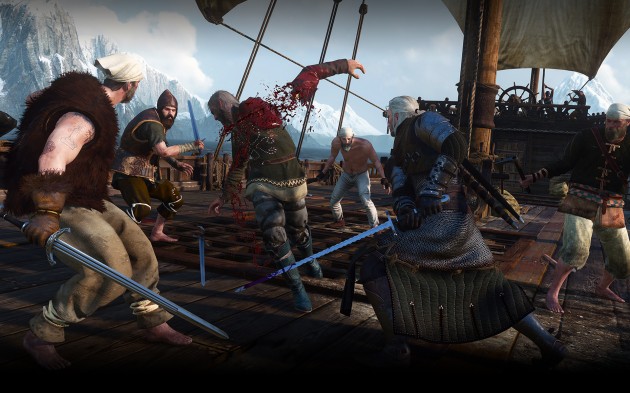 Beating The Witcher 3: Wild Hunt will take you a grand 80 hours to get through the first time around, and as the game contains nearly three dozen different endings you may find that the lifespan it has is quite longer than most of the combined current libraries of the Xbox One and PS4. While it may not have an online mode the amount of time you'll be spending completing quest after quest will have you forgetting that such a minuscule flaw even exists.

As we say goodbye to Geralt of Rivia, one can only hope that The Witcher series may continue in some form with a new protagonist. (Looking at you, Ciri!) With that said, if this truly be the final game in the franchise, they certainly close the book on this tale with one hell of an endgame. Geralt's journey may be over, but with The Witcher 3: Wild Hunt we can safely look back on this adventure with eye-widened wonderment for years to come.