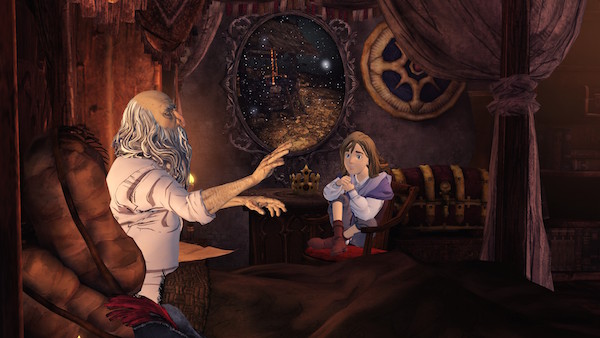 Borrowing from the more recent adventure game model, King's Quest: A Knight to Remember is the first part in an episodic series. The game puts you back in the shoes of King Graham, showing you the various stages of his rise in the kingdom every episode. It reminded me very much of The Princess Bride or How I Met Your Mother, in that the whole story is based around old King Graham telling the story to his granddaughter Gwendolyn. As such, they're able to create some funny moments, like the narrator creating a gust of wind that shoots you down a path if you keep going the wrong way.

There is a lot of faith being put in this project, from it being published by Activision and being given the blessing of the original creators of King's Quest, Roberta and Ken Williams. This support is very evident as you play in many ways, not the least of which is the very strong voice cast. Christopher Lloyd plays older King Graham and is supported by other cast members like Wallace Shawn and Zelda Williams. All around, the performances were strong and each character had a distinct personality brought to life by a combination of the great writing and spirited performances. The only thing that bothered me were the occasional nods to the actors playing the characters. I know it's difficult when you have someone like Wallace Shawn or Christopher Lloyd in your cast, but those jokes just took me out of the story. That being said, those were few, far between and largely made up for by the stellar performances by the cast all around.

Many games before have tried to emulate the look of a painting in a video game. With King's Quest, they took it one step further and actually hand-painted a lot of the visuals in the game. Several times while playing, I had to stop and just admire how gorgeous a particular scene looked. Pair that with some fairly light, jolly tunes and you have a game that is downright pleasant to experience. Playing on the PS4, there were a few frame rate hitches here and there, but nothing that detracted from gameplay.

If you've played any of the modern Telltale games, you have an idea of how this game controls. You can move Graham throughout the world, which is open for the most part, collecting items and using them to solve various puzzles throughout the world. They did a fantastic job of balancing the difficulty of the various tasks they set out for you. Nothing ever felt unfairly obtuse, but I did still get stumped on occasion. There are also action sequences throughout the episode which range from extremely well done, to a little clunky. Most of them are the former, I'm happy to report, so you can run through a dragon's cave shooting arrows and hiding behind mattresses with ease.

While not as overt a feature as a modern Telltale game, the game does offer choices you can make throughout the episode. These moments aren't nearly as in-your-face as you might expect, though you will likely see the effect of your choice before the end of the episode. Probably the most obvious of these involves your interactions with various shopkeepers in town. Each offers up a different perspective on how they think a proper knight should behave: being kind, smart or brave. Whichever you choose will effect Gwendolyn's story beat at the end of the episode which was a nice way to wrap up the episode. This episode, the first of five, was focused around young Graham as he vies for a spot as a knight of Daventry. It introduced a bunch of characters that I look forward to checking back in with in future episodes.

Chock full of references to the original series, King's Quest: A Knight to Remember does a great job of bringing back the spirit of the original series. At the same time, not having played all of the older games, I never particularly felt like I wasn't in on a joke. This game is just as perfect for a family as it is for a seasoned game player that had fun with the series a long time ago. Sierra's big return has a strong start with this game and I look forward to what else they'll be bringing to the table from here.