The visual novel genre constantly walks a very fine line of
focusing on story and gameplay. Rightly, since the genre is mostly about
telling a good story, some of them make that the focus in games like 9 Hours 9 Persons 9 Doors. On the other side of things, other titles like Danganronpa: Trigger Happy Havoc, put forth some interesting gameplay mechanics to pair with the story. Corpse Party: Blood Drive goes straight down the middle of that road by attempting to implement survival horror mechanics into its compelling story.

Coming into a story on the third leg of a trilogy can be an
intimidating prospect. I had never played any of the previous entries in
the Corpse Party series and this was a fact I knew going into Blood Drive.
This was most obvious at the start of the game as it just throws you
straight into the events of the end of the previous game. It was
overwhelming at first, but it does make a good effort to refresh you on
previous events and getting acquainted with the characters. Once you’re
in, the story will easily holds your focus with a macabre tale of a
group of friends returning to a deadly elementary school in another
dimension. After managing to get a foothold in the story, I really got
into it and ended up enjoying the arc of this game. This speaks to the
quality of this individual entry in the series, since if I could find my
way to enjoying this portion independent of the others. Obviously, fans
of the series will have both a better overall understanding and a more
satisfying resolution, but I’m still glad I was able to hop aboard even
at this late point.

Most visual novel games either go fairly heavy on gameplay, or leave it out almost altogether. Corpse Party: Blood Drive
goes the gameplay route by integrating survival horror mechanics into
the playable bits of the game. As you walk around Heavenly Host
Elementary, you have to avoid being hurt by ghosts and jagged
floorboards as well as making sure your flashlight doesn’t run out of
batteries. You can find bandages for your health, talismans to ward off
attacking ghosts and even batteries for your flashlight as items in the
environment. Also, as collectibles, dead bodies are strewn about the
haunted school and you can collect their tags, listing their names and
cause of death. There are quite a few of these laying around and I
actually enjoyed picking them up and reading the fate of the poor souls
lost to the killer school. 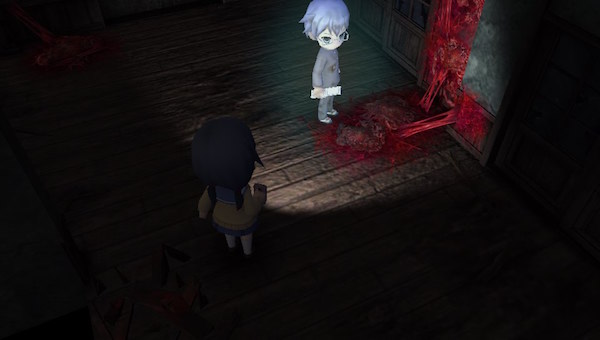 To advance the story, most of puzzles involve finding items scattered
throughout the haunted rooms that will allow you access to new areas.
Paying attention to all of the dialogue then becomes extremely important
as clues to where you need to go next are often right there in the
dialogue and less obvious than you might expect. I spent quite a bit of
time, not quite sure where to go next, wandering the halls of Heavenly
Host, only to eventually stumble across the solution by accident.
Eventually, because of a lack of an in-game map, I even printed a
physical copy of the layout of the school so I could quickly locate each
room as it was referenced as my next destination. It felt a bit like
playing a Silent Hill game without a map, with the relatively
innocuously-named rooms and temporary dead ends very difficult to
memorize even if you weren’t exploring in the dark with a limited
flashlight.

Let’s take a moment and talk about load times. The sheer volume of
loading time in this game is unacceptable. Every time you pause or move
to a new area, there is a 10-15 second loading screen. This is even more
frustrating with the wonky hit-boxes for doorways in the game. When
trying to avoid walking into a hazard on the floor, it’s far too easy to
accidentally go back through a door. This leads to loading fully into
the previous area and then back into the new area for an almost 30
second mistake that made me want to throw my Vita against the wall
multiple times throughout my play through. I can certainly understand
some loading between areas, but having to wait for the pause screen to
load for 10 seconds is baffling. 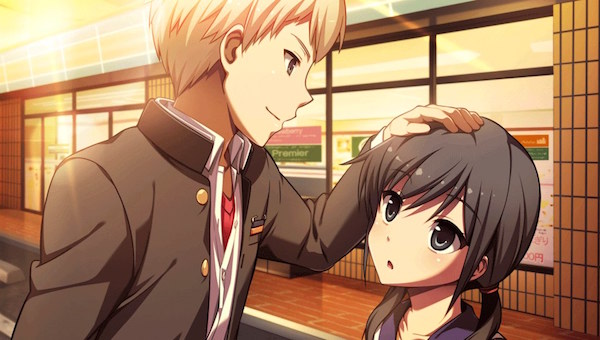 All that being said, the creepy hallways of Heavenly Host Elementary
are detailed and look great. Everything down to the floorboards have
impressive textures and the chibi-style character models work well to
represent the characters in-game. The glow of the flashlight also adds
to the creepy atmosphere of the game by only illuminating what is right
in front of you. The static art throughout the story sequences is also
well drawn, summing up to a graphically competent game. The visuals do
occasionally make the frame rate drop, but aside from the loading
issues, the game runs well overall.

Corpse Party: Blood Drive shot squarely for the middle of
the road trying to deliver both a great story and fun gameplay
experience. While it successfully delivers an engaging and interesting
story, the game portion of Blood Drive does have a number of
issues. Though not enough to deter me from getting through the entire
game, the load time issues are noticeable and frustrating and not having
a map to reference is a puzzling move. As a fan of narrative-based
games, I still enjoyed Corpse Party: Blood Drive, so fans of
the series overall should definitely still check this one out. Those
looking for visual novels that have interesting gameplay mechanics
should likely look towards games like Danganronpa instead.