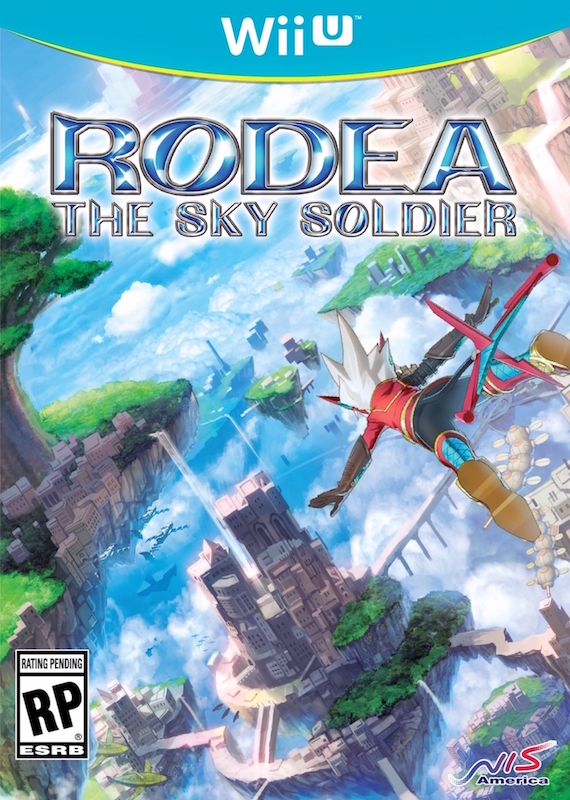 I used to be surprised when Yuji Naka's name wasn't placed in the same ranks of Miyamoto, Kojima, and Igarashi. After all Naka's the same person responsible for the SEGA's platforming glory days, bringing forth such memorable titles as Ghouls 'n Ghosts, Sonic the Hedgehog, NiGHTS into Dreams..., ChuChu Rocket!, and Phantasy Star. However after leaving Sonic Team in 2006 and forming Prope his resume got really bumpy, with titles like Ivy the Kiwi? and Fishing Resort receiving lukewarm reception, at best. When I first went hands-on with his newest game at this past year's E3, Rodea the Sky Soldier, I thought that the magic that Naka had lost had been regained.

Alas, it seems, as what I had initially saw was but an illusion to Naka's former greatness. The full version of Rodea the Sky Solider can be described -- quite bluntly -- as a complete and utter mess, one that fills the brain with more frustration than pleasure. Now I understand why Naka's name isn't as synonymous to greatness as his peers'. 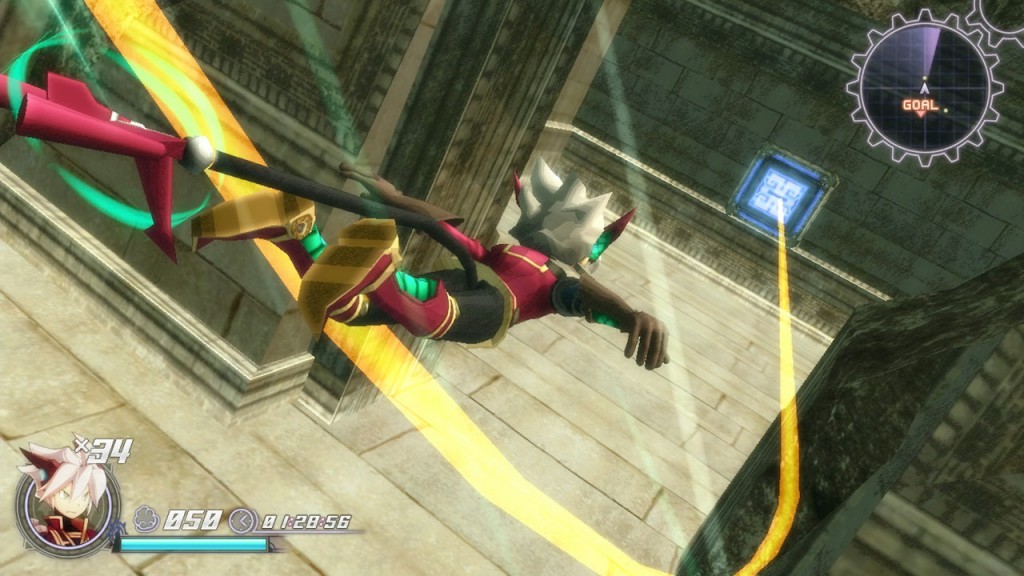 Rodea the Sky Soldier follows a flying robot bodyguard to Cecilia, princess of Naga. Her country is in the process of invading the neighboring kingdom of Garuda, an action that Cecilia frowns upon. In order to stop it from happening she and Rodea steal the Key of Time from her father, Emperor Geardo, and take off to Geruda. After failing the task Cecilia gives half the key to Rodea, sending him a thousand years into the future.

Upon being reactivated Rodea finds himself in Garuda, with his new mechanic Ion by his side. His memory is vaguely warped, only to have it slowly return as the vision of Geardo appears alongside a vast army of his menacing robots. Together Rodea and Ion must put a stop to the invasion, save Garuda, and find a way to recover the memories of Rodea's past. 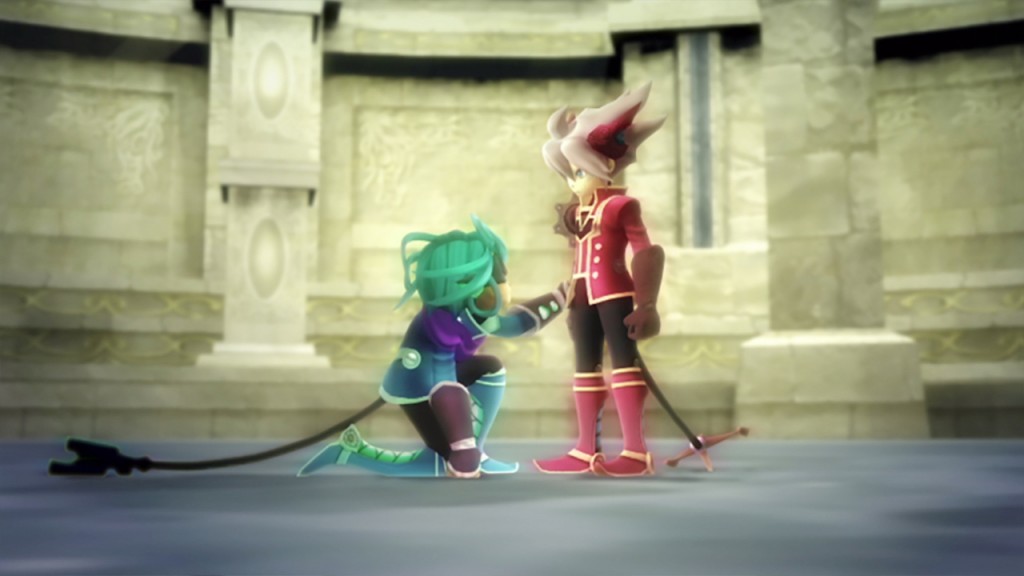 Perhaps the finest thing to come out of Rodea the Sky Soldier is its overall story arc. A robotic warrior sent forward into time to prevent an evil force in the past to gain victory isn't something you come across too often in the gaming realm. Although you're thrown into the midst of the invasion as it's progressing, the actions and the emotions of the characters give you a great understanding of why they are revolting in the way they are. It's elements like this that help to drag you into the tale this video game is spinning.

It's unfortunate that the gameplay thrusts you away from having any level of enjoyment during the title's runtime. Playing as Rodea will have you attempting to run and fly around the worlds as you collect Gravitons, upgrade pieces, and attack enemy robots and monsters. Trying to fly with the Wii U GamePad or Pro Controller is next-to-impossible, with its aiming incredibly flawed to the max. Attacking enemies is literally hit-or-miss here, as the aiming system likes to send you flying towards nearby objects or -- in many cases -- sudden death below the floating worlds. 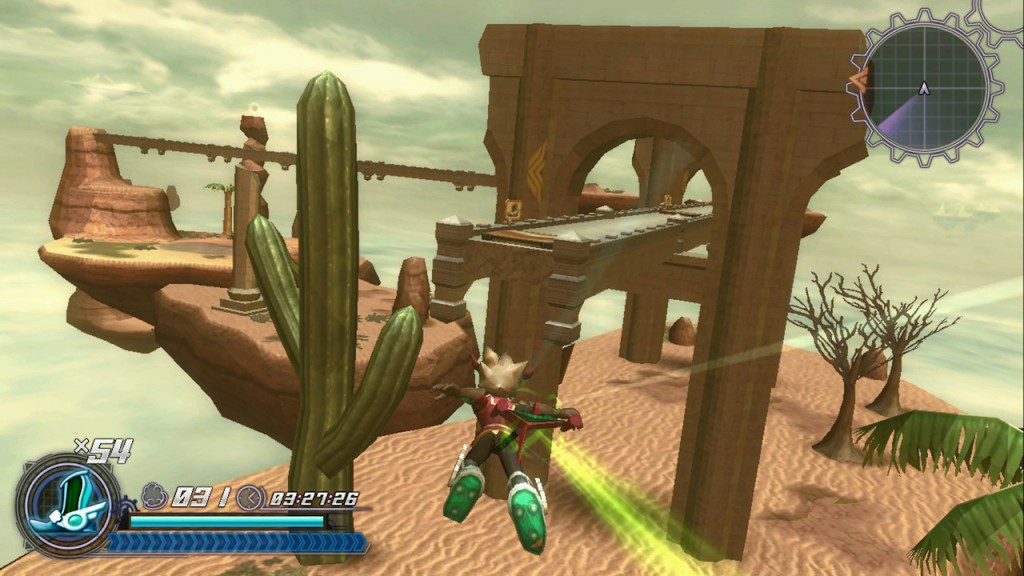 It doesn't help either that the camera system makes it all the more difficult to see what's over, under, and coming right for you. Many times did I have to adjust my angle, only to find Rodea getting stuck in a wall, inadvertently harmed by an enemy, or even plunge to his death. There were a few times when I couldn't locate a chain reaction that could lead me towards the next section of the level, which then had me spinning through the angles in a heavy panic in fear of losing all my current progress. This had happened a few times when I had zero lives left, so just imagine how frantic this reviewer must've felt when put into this situation.

Being that Rodea the Sky Soldier was originally built to be a Wii title, I am shocked to see that the ability to play with a Wiimote and Nunchuck is non-existent. Honestly I can picture myself having a much better time with the game if this option was still there. Instead I am forced to fuddle with a regular controller and keep on crashing into nearby walls and being hit by surprise explosions. (A first-run of the physical copies of Rodea the Sky Soldier come with the unreleased Wii version, but wasn't provided for review.) 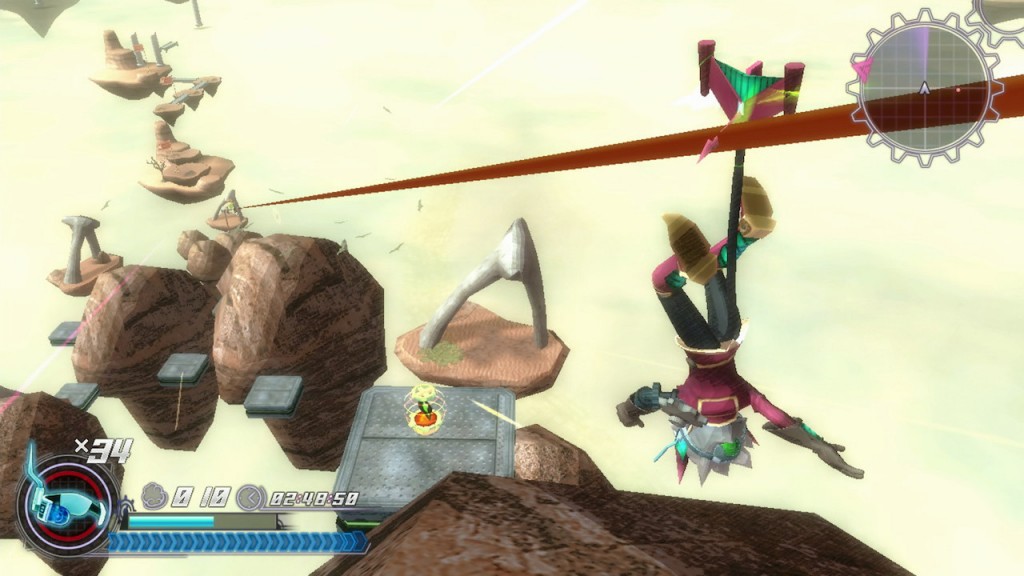 The levels of angst that I received while playing this game weighed down on me more because of its lives and checkpoint system. You start off the game usually with about three lives, with the option to gain more if you collect 100 Gravitons. Each level has their checkpoints, which are in the form of bells that you ring to ignite them. However if you are to die during gameplay you lose just about everything you've collected, even if you got to a checkpoint beforehand. Reach a Game Over screen, and not only will you have to start the level all over again but the upgrade parts you collected will be taken away.

The combination of bad controls and poor checkpoint system had me literally flinging my GamePad with pure rage-quit anger. (I, of course, made sure to fling the GamePad at a soft couch so as to not break it, because I don't wanna pay the fees it'd cost to fix.) Having to play certain levels over and over again without any sort of real strategy you can build off of it was no fun, indeed, with my mouth screaming George Carlin's famous seven dirty words on repeat as I died at the exact same moment as before. It brought to mind my experience with The Simpsons Game on the Wii many years ago, whose humor couldn't help mask the bugginess and horrible camera system it featured. If there's a gaming equivalent of PTSD, then I experienced it while playing Rodea the Sky Soldier. 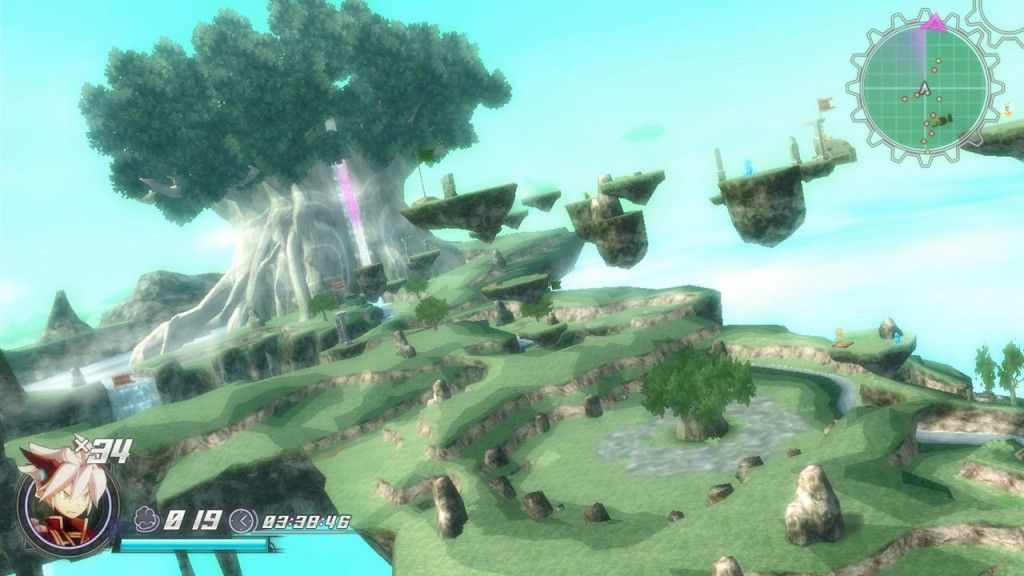 Then there are the graphics. At first Rodea the Sky Soldier looks beautiful, with the forest worlds and blue skies really catching my eyes as I played earlier levels. Sadly as the game progressed the worlds became less and less lively, with empty areas and half-assed levels whose purpose just seemed to be to act as another jump point for the robot. After being teased with some Skies of Arcadia-like beauty from the gorgeous game concept art posters I received a few months back (which have been placed around me as I write this review), I feel like Prope had enacted a bait-and-switch tactic.

I was left pondering many questions as I turned off my Wii U and stared at the blank screen before me. Did Yuji Naka give up on his creation, one that he spent the last five years trying to bring to the masses? Was Kadokawa Games pushing Prope to finish the game on a deadline, even if it meant having to cut corners in various areas? What exactly happened to Rodea the Sky Soldier that left it to be released in the way it was? 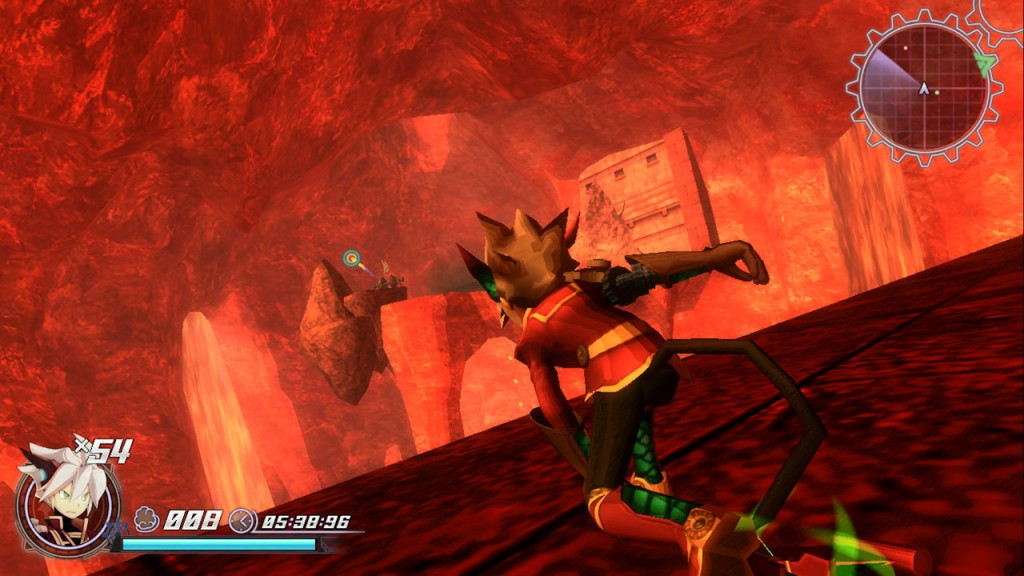 These questions are asked because there is so much potential with a game like this. These are great characters, voiced by some talented voice actors on both sides of the Pacific. (I may be in the minority here, but I cranked Ion's chattiness to full throttle in the options menu, as her adorableness was the only thing helping to keep me sane throughout my play-through.) This could've been the start a beautiful new franchise, leading towards sequels and maybe even a great anime adaptation.

Sadly we may never know the answers to those questions, and because of the way Rodea the Sky Soldier has been released -- with no update to fix its bugs and issues anywhere in sight -- the potential it has will probably never be realized. And it hurts to say this because I had so much hope for what this game wanted to present to players everywhere. Honestly I can't imagine a lot of people being able to fly through its fifteen-hour runtime, even if they have the highest level of gaming optimism that's humanly possible.

I tried so hard to enjoy myself while playing Rodea the Sky Soldier, and failed I did. Whatever it was that Yuji Naka, Prope, and Kadokawa Games were thinking when releasing the game in the state its in, it sure wasn't because they thought they had a finished product. Instead what we have received is a game that wishes to place itself with the games of Naka's past, only instead smacks face-first into the pedestal and smashing onto the ground. Maybe one day this flying robot will be given another chance at bringing happiness to gamers everywhere, but for now Rodea the Sky Soldier appears to have been given a dishonorable discharge.