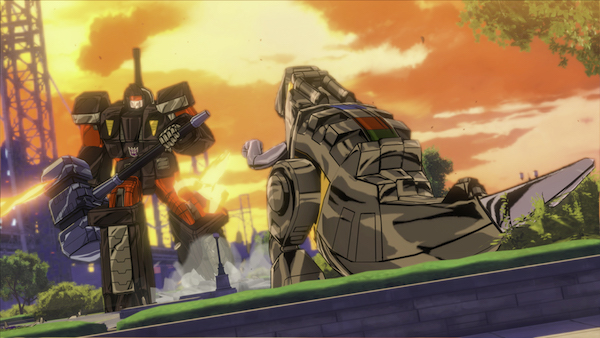 REVIEW | 'Devastation' Rolls Out the Nostalgia

Autobots and Decepticons spent quite a bit of time battling it out on my playroom floor when I was young. They were some of the coolest toys around back then and I still consider The Transformers: The Movie, the animated one not the Michael Bay joint, to be one of my favorite animated films. Thus, when I heard that PlatinumGames, the team behind games like Bayonetta and Metal Gear Rising: Revengeance, were putting together a Transformers game, my interest was piqued in a big way. The end result, Transformers: Devastation, is the Transformers power fantasy my childhood self has been waiting for all this time.

Variety is the name of the game when you're trying to keep a character action game like Transformers: Devastation from getting stale. Thankfully, PlatinumGames has inserted plenty of options to keep the game from getting old before it's over. All around the game world, you'll find item chests containing new weapons for your Autobot of choice to smack around their foes. There are a decent variety of weapons to choose from and they don't put a lot of restrictions on which characters can use them. Each tool of destruction has a particular feel to the combos they can string together, so switching around is a good idea to keep the game feeling fresh. There are also various elemental alignments and power rankings attached to weapons, which is important to watch out for to stay ahead of the Decepticon-destroying curve.

There are five Autobots to choose from when playing: Optimus Prime, Bumblebee, Sideswipe, Wheeljack and Grimlock. Each character plays in a unique way and it didn't take me long to find a favorite. I spent most of my time as Sideswipe during the main campaign, but each robot had their own charms. Grimlock, for instance, can transform into his dinosaur form and actually shake enemies in his jaws. Each other character can turn into a car and drive speedily through the stages, smashing barriers as you hit speed boosts. Transforming back and forth is satisfying when successfully navigating the stages, but some of the environments are too narrow to do this consistently. The action is broken up occasionally with platforming sequences, which is a nice change of pace, but they are not as fun as the brawling portions.

One of the most iconic sound effects ever is the sound that the Transformers make when they transform. I'll readily admit that I'm not the most die-hard fan the series has, but it was hard not to be giddy the first time I transformed and that sound played. It's the little details like this that make it easy to see that PlatinumGames took this title seriously and wanted it to be an authentic experience. They even managed to nab a great deal of the living cast of the original series to do the voices. This, along with the game's soundtrack being written by Vince DiCola of The Transformers: The Movie fame, lends a great deal of credibility to the game and helps sell it as playing episodes of the cartoon.

The cityscape, space and Cybertronian settings of Devastation are a little generic, but very clean and get the job done in terms of giving you a good place to brawl. Some of the set piece moments are a little flashier, but there are only a handful of those in the seven chapter campaign. If you take the main story on its own, Transformers: Devastation doesn't take very long to get through. The rest of your replay value is found in both trying out harder difficulties and the challenge mode that unlocks as you play. The challenge mode consists of 50 extra missions that were, to me at least, a bit tougher than the ones from the main campaign. Your character progress also extends to the challenge mode, so you can use it to either bolster your existing favorites or get some experience for some of your lesser-used Autobots.

Transformers is a brand that seems like it should naturally lend itself to being a video game, but it could just as easily go very wrong. PlatinumGames has taken the time to put the love and polish on Transformers: Devastation to make sure it not only lives up to the dynasty the show has created, but ends up a fun game in the process. The campaign ends fairly quickly, but there's enough to come back to that any fan of the series should have their hands full for some time. Now transform, roll out and check out Transformers: Devastation on the PS4, PS3, Xbox One, Xbox 360 or PC today.