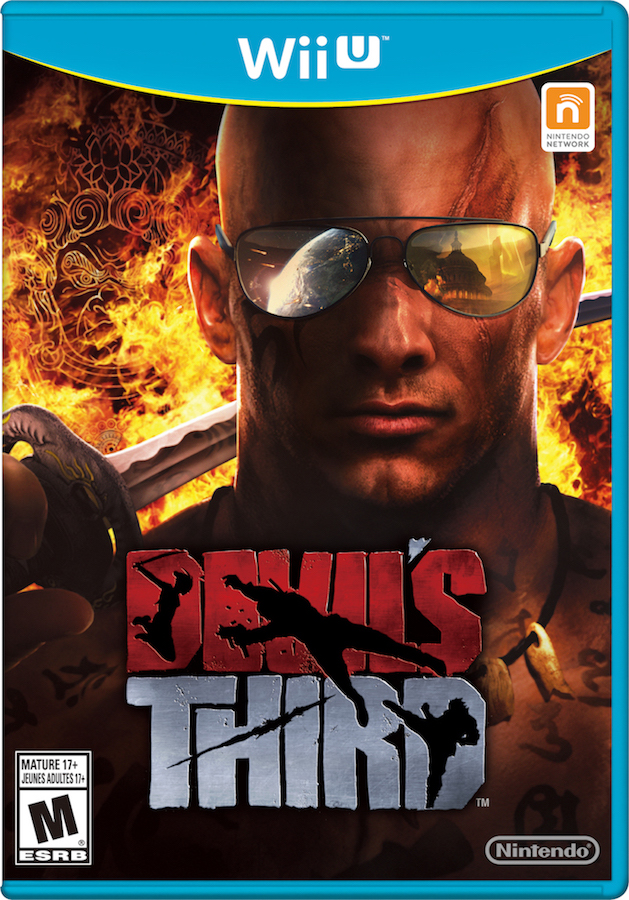 It's been a long harrowing journey for Devil's Third, the first game from Valhalla Games Studio. Founded by Tomonobu Itagaki (creator of Ninja Gaiden and Dead or Alive) and Satoshi Kanematsu (Monster Rancher), the game was first planned to be published with THQ for the PS3 and Xbox 360, but when the company went under Itagaki's latest creation was in jeopardy. In 2014 it was announced that Nintendo had rescued the game, and was planning to publish it as a Wii U exclusive. First hitting Japan this summer the game was met with good reviews from critics and fans, but as it hit Europe the journalists there weren't quite pleased, with Nintendo of America quietly releasing the game here this month with very little fanfare.

It's a shame really, because despite what other critics may say Devil's Third is actually quite an enjoyable game. Granted it's not a title that's on an epic scale like Fallout 4 or The Witcher 3: Wild Hunt, but as an experience overall the latest Wii U-exclusive is pretty damn fun. 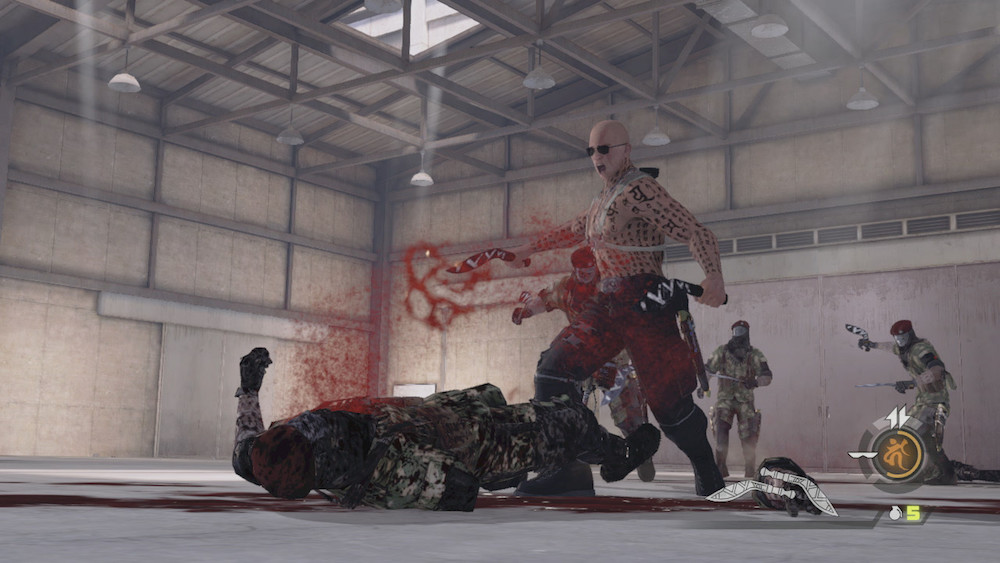 First let's dive into the Campaign mode. Devil's Third takes place after all the orbiting satellites around the world are taken out, sending the world into total blackness and without the necessary electronics to find the people responsible. The United States military are then forced to use their trump card: a sunglasses-wearing kanji-tattooed Russian prisoner simply known as Ivan. Bribing him with what appears to be a shiny expensive guitar, he breaks out of jail and offers a hand, fist, and katana to take down those responsible. However it turns out Ivan knows the villains who plunged the world into darkness all too well.

The story in Devil's Third feels like something you'd see in a movie airing on Cinemax in the afternoon during the late 80s. It's not exactly all there, but what is pieced together is pretty easy to follow. You know the importance of these mercenaries gone bad that Ivan once had close ties to, but the emotional attachment isn't all out in the open. All you need to know is that bad people are doing bad things to the world and they must be stopped before it gets worse; nothing more than that. 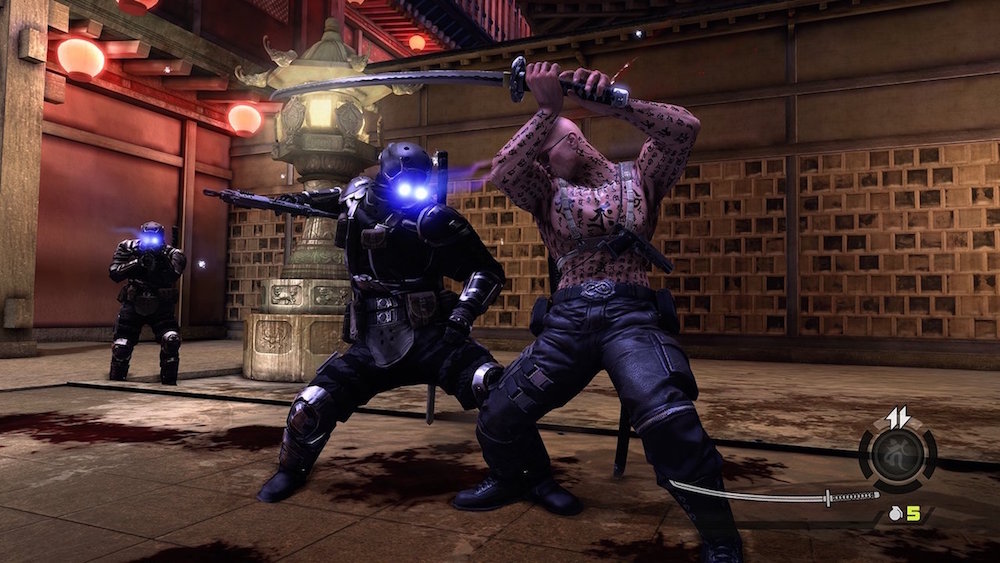 It's the character of Ivan that makes the whole thing incredibly enjoyable. A mixture of Arnold Schwarzenegger in Commando, Dolph Lundgren in The Punisher, and Vin Diesel in...just about every film Vin Diesel stars in, our anti-hero is a monotonous killer who makes it his goal to slay just about every enemy he comes across. He cracks a few jokes, a lot more skulls, and finds the time to have a smoke break or a quick swig from his flask even when bullets are raining down on him and his military allies.

Hence why you don't see Ivan level up during the game. From the very first moment you see him performing one badass drum solo in his classy penthouse jail cell you know that this man is practically invulnerable. Hell, even after being shot or stabbed he can merely just walk it off and be fully healed soon after. Itagaki's goal was to give players the chance to play the character a Stallone or a Van Dam would be cast in, and he succeeded here in Devil's Third with flying colors. 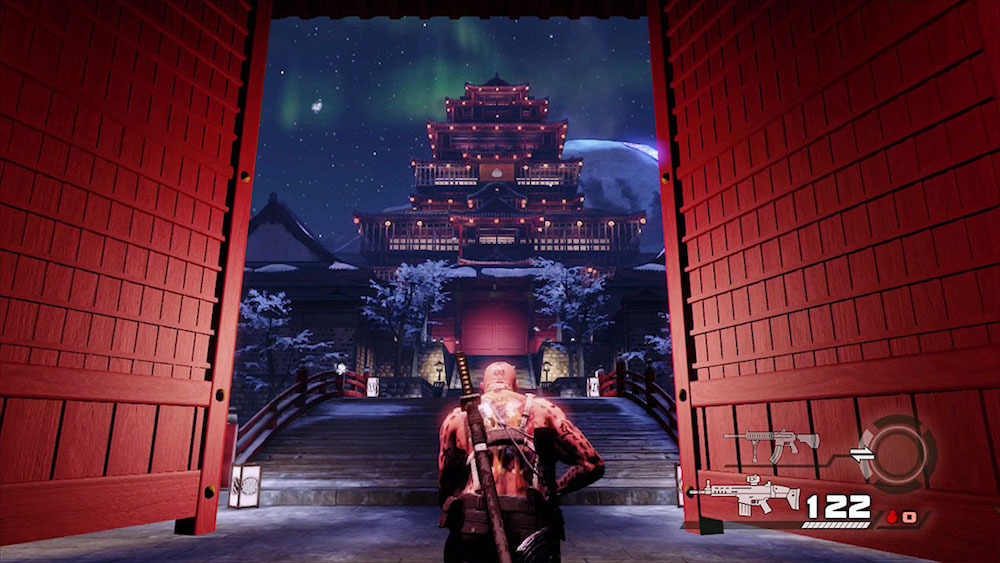 Throughout the levels you'll come across different guns, grenades, and melee weapons to use on enemies, some of which I noticed had much better killing power than others. In regards to melee weapons I did my best to keep my katana with me, but there were moments where machetes or tomahawks felt far better during the specific situation. (I'll admit that I never tired of pulling a Gallagher with a sledgehammer and an enemy's head.) Guns felt the same pretty much, although there is an extra coolness factor to using sniper rifles or -- in the most extreme of cases -- an RPG.

Enemies can be fairly easy for the most part, serving more as things that are in the need to be stabbed or shot during the process. You can either gun them down or -- if you wanna be more fun with it -- chase them with your melee weapon and go all Kill Bill with them to the point where their blood and entrails are now permanent fixtures on the surrounding walls. It's when the Heavies come in with machine guns and chainsaws blaring when you'll need to be extra careful, as they can seriously make it rain on your death parade. 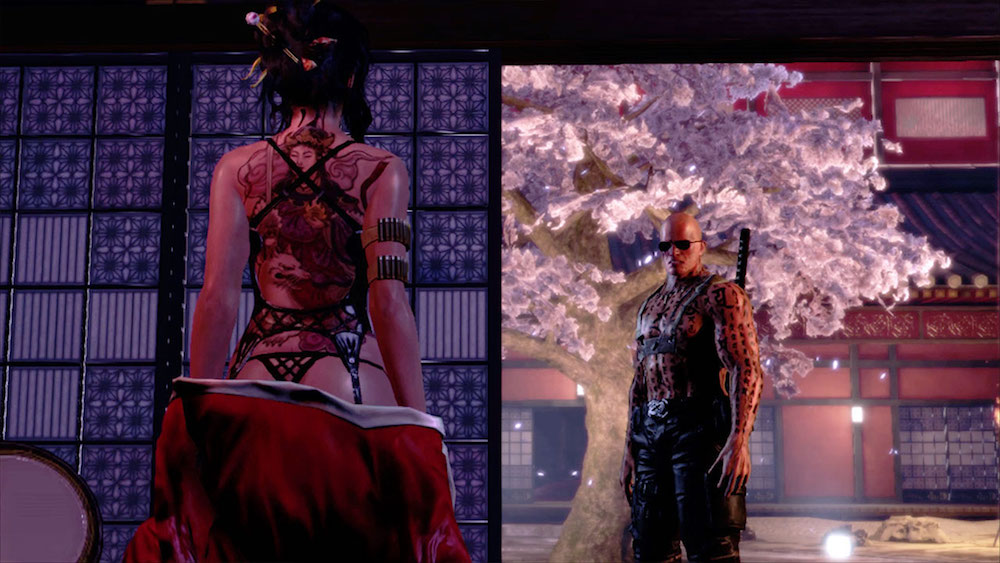 When boss battles are initiated that's when the frustration will come in. As tough bosses are Itagaki's trademark it's going to be one of those situations where you'll need to be on your toes at all times when playing, and -- for the most part -- use just your melee weapons to take them down. (Some bosses will even punish you greatly for using a gun in their fight.) It's even irksome when the enemy -- especially someone like Jane Doe -- tackles you and does a one-hit kill, forcing you to start all over again. These boss battles will take time (sometimes up to 1-2 hours) to even pass, so it's best to read their movements and know when to strike before it's your head that winds up being served on a platter.

Devil's Third does a fine job with its control scheme, with the ability to switch it up to whatever your play style should be. For the most part I found myself using the Shooter setup, as it was nice to use all my weapons and melee moves using just the L & R buttons. However during the boss battles I found it was life-saving to have the dodge button be an actual button rather than a click with a control stick, so I occasionally would switch to the Default setup for these occasions. Still to be able to switch controls and jump into the new layout with little annoyance is actually pretty impressive. 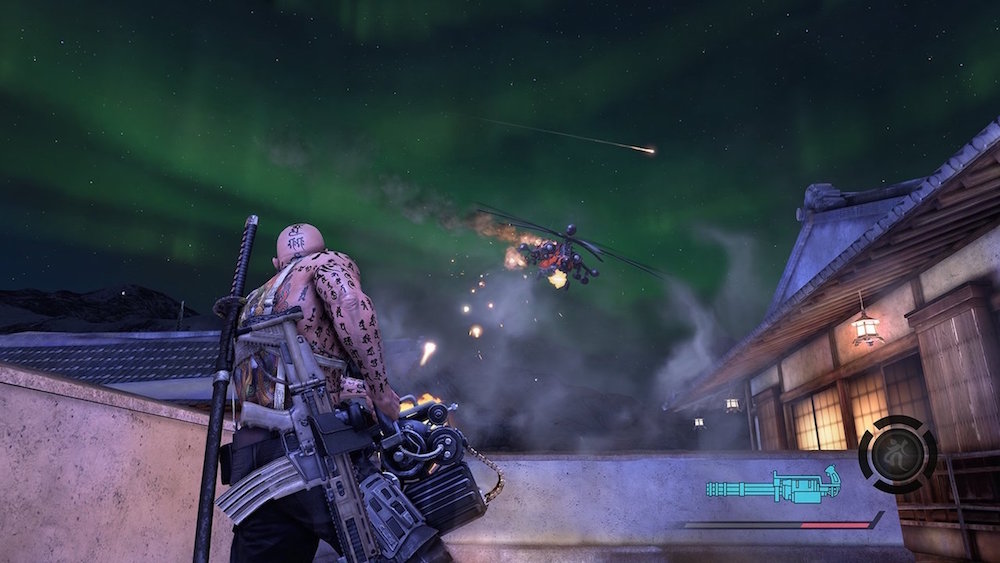 However that leads to the least-spectacular part of the game: its graphics. As it's been in development for many years you can see that Devil's Third hasn't aged well as it was being created. In many areas it appears a lot like something that should've come out as a last-gen launch title, with characters not as detailed and movements somewhat robotic. It's not bad per se, but the overall look isn't good either.

With that being said, video games should never be judged by its looks, but rather by how well it plays, and surprisingly the campaign mode plays rather enjoyably. It's got quite a few flaws, but the overall presentation during Ivan's entire mission is pretty damn good. All it takes is for a player to take out any serious aspect of themselves out of the gameplay experience, maybe put their brain to rest, and just enjoy the madness that is bestowed upon us by Nintendo and Valhalla Games Studio. 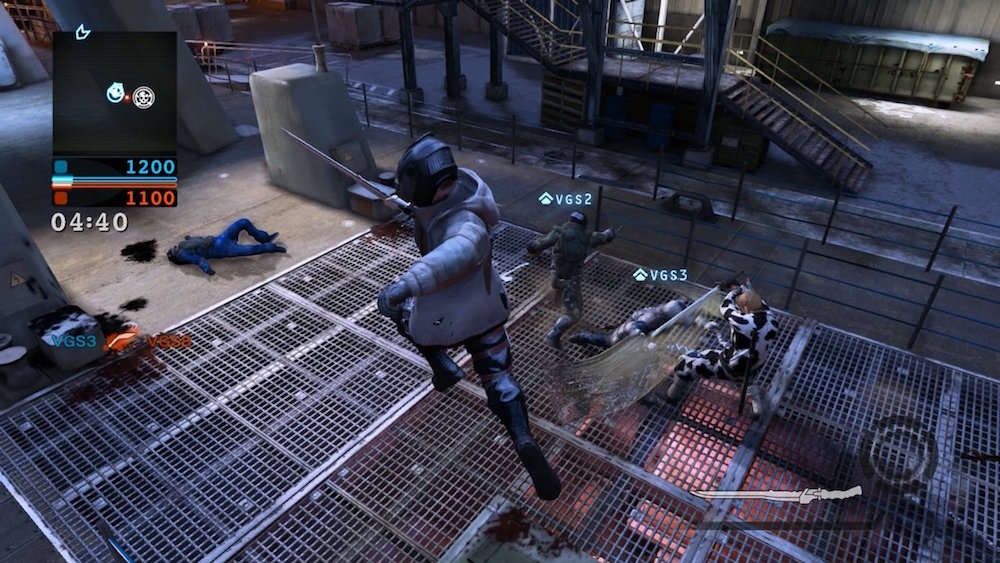 Your brain will be needed to be switched back to full power for multiplayer mode, though, as Devil's Third features a great bunch of modes for online players to wreak havoc on. There are your usual Team and Solo Deathmatches, which are a whole different level of fun when it comes to using your melee weapons instead of your guns. (The feeling of slashing an opponent rather than shooting them is rather more satisfying in this game, after all.) There is also tower defense/offense mode Siege, where you'll have to take down the opponents' area while protecting your own, adding more to your fort as the game progresses. Some humorous ways to play online are also on display here, including one mode where you have to collect fruit and toss it into a mixer (Carnival) and another involving capturing chickens (aptly named Chickens).

It's Gladiator mode that stands out the most here. There is one weapon in the entire map, and everyone is out to get it. Have it in your possession and you'll have the advantage, but it's battling it out melee-style and chasing for the weapon that makes this mode the most enjoyable of them all. As you play online you can use what you earn to unlock new weapons, gear, and other customizable things. It's not as colorful (and family-friendly) as Splatoon, but what is delivered here in Devil's Third's online mode will no doubt bring many hours of exciting anarchy to your Wii U. They may not know it, but with this, Splatoon, Super Smash Bros., and Mario Kart 8 Nintendo may have just become the premiere place for first-party online gaming. 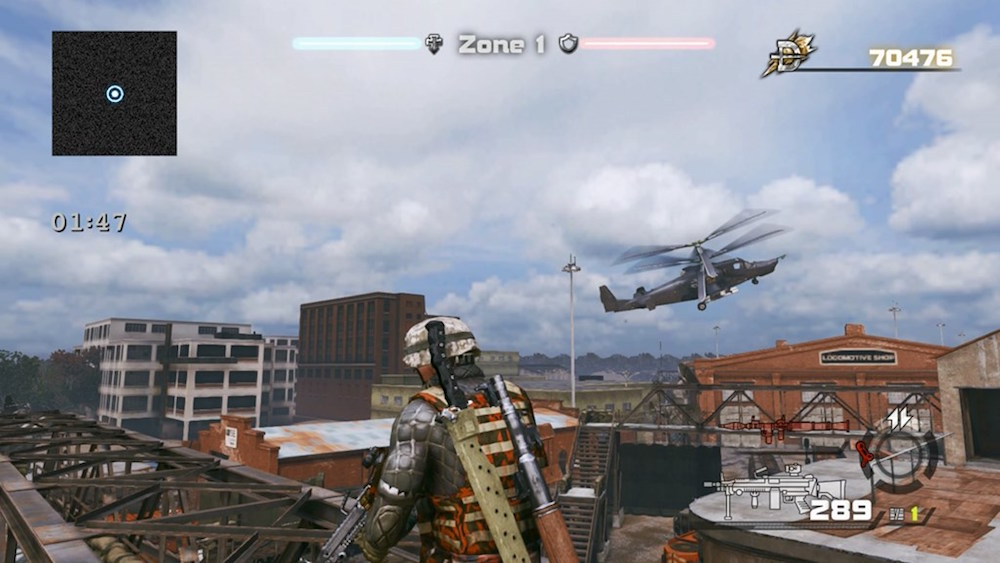 Devil's Third goes hand-in-hand with the late Nintendo President Satoru Iwata's philosophy on gaming, and that in the end all that matters is that it's an overall fun experience. It may not have the prettiest bow on or pack the most powerful punch in the pack, but it offers a great little nonsensical escape from all the video games out there that take themselves far too seriously or try to have some sort of powerful message in its story. Truthfully: so long as it leaves a big grin on your face soon after the credits are rolling, who cares about having a moral or lesson in a video game. For having the guts to be old-school in its delivery, we have to thank Valhalla Games Studio and Nintendo for finally bringing Devil's Third to the gaming world.

Devil's Third is not perfect, but it's still one of this year's most fun gameplay experiences. With its 80s-inspired script, goofy gore, and its standout multiplayer mode Valhalla Games Studio has unleashed a beast that's destined to become a cult fave with players in the future (unless more people buy it now at the Nintendo eShop, which they most definitely should). Devil's Third may be cheesy, but in the immortal words of Arsenio Hall, "Damn! This is some good-ass cheese!"

Final Fantasy XV: What We Know So...