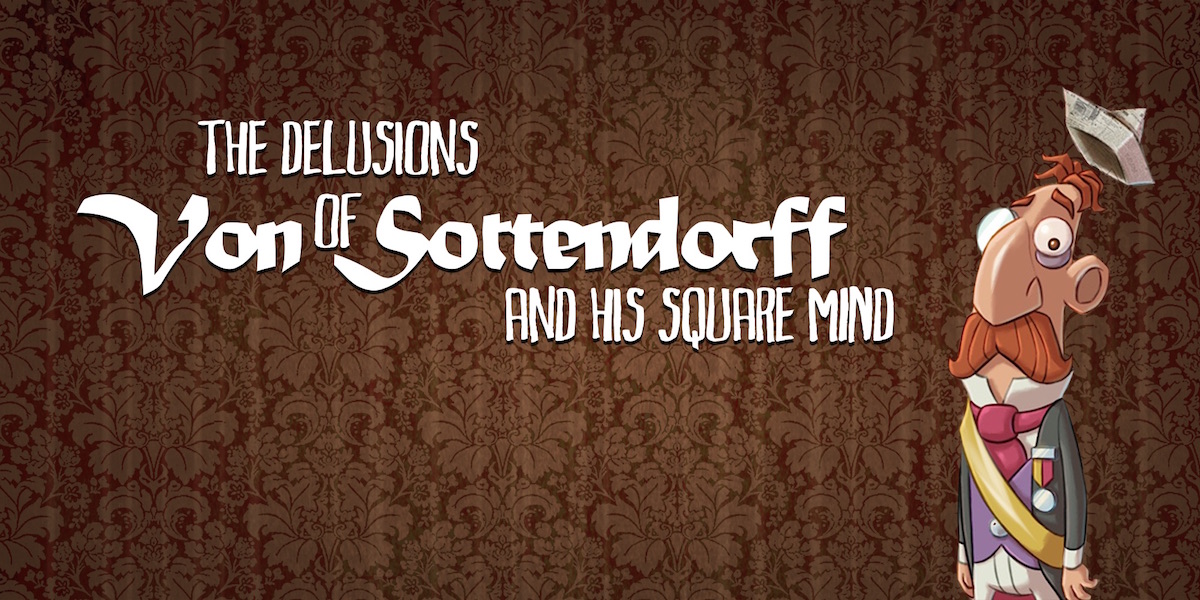 Combining the style of platformer gaming with the brain power of a puzzler can be tricky, as one side of the coin may overweigh the other in a way that ruins the gameplay. How fortunate that someone out there was finally able to crack the code, and deliver a title that mixes these two genres and still manage to make it a fun and incredibly memorable experience. That someone here is Delirium Studios (The Rivers of Alice), and with their mouthful of a title The Delusions of Von Sottendorff and His Square Mind they have unleashed one of the best handheld gaming experiences of 2015.

The Delusions of Von Sottendorff and His Square Mind focuses on the title character, who has gone off and wandered throughout his massive mansion. Looking like someone straight out of either Time Bandits or Yellowbeard, Von Sottendorff lets his mind wander off towards parts of his life that he has kept locked up inside of him. As the Narrator warns you to not continue on with this adventure, a past begins to unfold that have led Von Sottendorff to become the crazed, sad man he is. 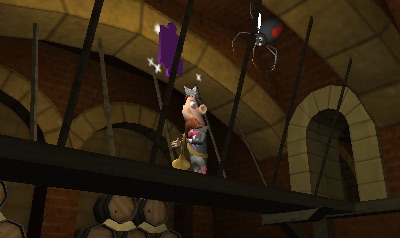 In each level Von Sottendorff must seek out a key and puzzle piece, both of which will bring him closer to unlocking his repressed past. However it's not as easy as it sounds. For some reason Von Sottendorff's living quarters have become mixed up, with rooms not aligned in the ways they should be. Using the bottom screen of the 3DS players must rearrange the rooms in various ways to meet the goals at hand. Some rooms will link up perfectly, others will not. The name of the game is to continuously build yourselves a path that will help to grab both the key and puzzle piece and escape.

Sometimes the solution is fairly easy, with the easiest levels taking no more than a couple minutes to figure out. However the more rooms a level has, the trickier it becomes. In some cases the bigger levels took me almost fifteen minutes to complete, and in rare occurrences had left me with no lives left and minor frustration. As I learned earlier on, the clearest path to the solution is quite well-hidden...literally. With a toot of Von Sottendorff's trumpet (which can also take care of some enemies) jump spots and door openings will be revealed, bringing our hero closer towards the truth behind his past. 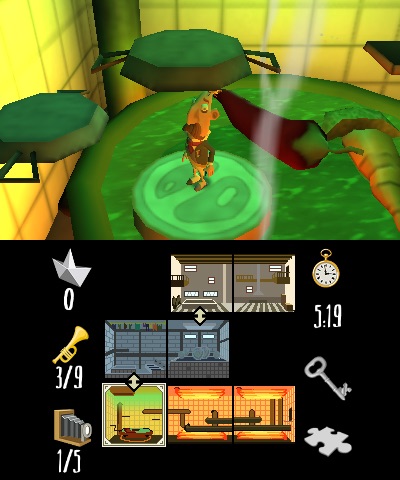 While The Delusions of Von Sottendorff and His Square Mind never fails to be silly along each step of the way, behind its clown makeup is a tale of sadness. As a boy Von Sottendorff holds a strong connection towards certain key elements of his life, but when they are taken away from him prematurely the realm of isolation and a forced free-caring mentality is then placed upon the man who -- in a sense -- is still that little boy trying to figure out the why's and how's of his upbringing. What Delirium Studios has crafted here is a game and story that is for anyone in the family to enjoy, but at the same time knows when to look even the smallest child in the eyes and maturely tell them about the darker moments of life.

Before the game begins, it instructs you to play while wearing headphones. The reason for this is simple: immersion. As you play you'll hear certain aspects, enemies, and hot spots in different areas, and the way to find them is by listening to which direction they're coming from. One of the coolest things about this game is when the Narrator takes advantage of this immersion, as he'll pop up in one ear, move about to the other, and make it feel like that literally walking around in your brain. 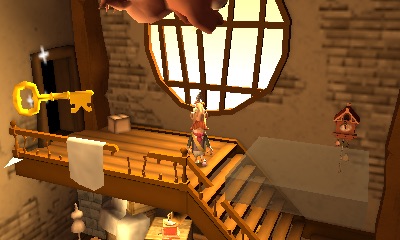 The Delusions of Von Sottendorff and His Square Mind's soundtrack is quite beautiful and powerful, especially during some of the more harrowing aspects of the game. (The timed levels, for instance, will keep you on edge as the orchestra plays you towards either victory or utter defeat.) However as the songs can be rather short they tend to repeat themselves over and over again as you play through the level, and in certain areas they can be rather annoying instead of encouraging.

While Delirium Studios' latest game is incredibly fun, it does have some minor hiccups. Levels that have more than five rooms to deal with tend to run on a slower framerate. There's also some problems with certain camera angles, as doors and smaller openings can be a little bit tricky to find. Fortunately you can adjust the screen to see what you need to, but it kind of presses the pause button on a game that requires your mind to act fast. 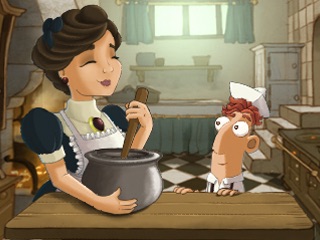 The Delusions of Von Sottendorff and His Square Mind will take you roughly 6-8 hours to complete, depending on how fast you are with its puzzle elements. While there isn't much in the replay value, you can always return to older levels and try to beat your previous times. Also throughout the levels are Polaroid pictures, which can help to unlock music, movies, and other Extras when you collect them all.

The Delusions of Von Sottendorff and His Square Mind is a brain-tinkering and masterful take on both the realm of puzzlers and platformers. While it may seem like a mere goofy adventure with a Gilliamesque protagonist, what unfolds during the game's entire run may wind up bringing gamers to tears with its heartbreaking story of lost love and mental isolation. Delirium Studios has given us the best indie 3DS title of 2015, one that will stay in our minds far beyond the handheld's life expectancy.