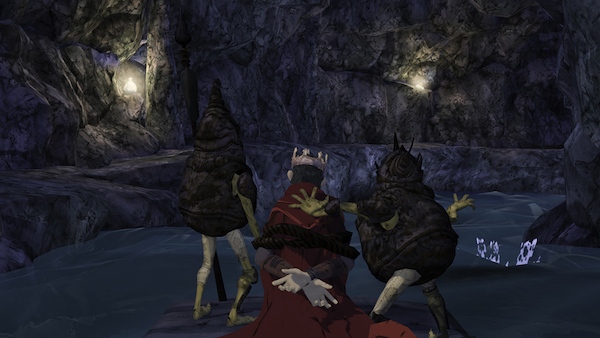 REVIEW | Gotta Feed Em All in Episode 2 of 'King's Quest'

One of the most common pitfalls when games are episodic is stagnation. Sometimes just a new bit of story isn't quite enough to separate it from the other episodes. The Odd Gentlemen have provided an excellent example of how to do this right withe second episode of their reboot of the King's Quest series. Rubble Without a Cause takes a chance by adjusting the formula set forth by the first episode and succeeds by creating a darker and more intense chapter.

Skipping a bit of time, Rubble Without a Cause opens shortly after Graham has been crowned the king of Daventry. Stressed by his new position, he takes a walk and is kidnapped by a band of goblins. Upon waking up in the goblin prison, Graham soon discovers that the whole town has been kidnapped and it is up to him to both care for and free the citizens of his kingdom.

The basic mechanics of the game haven't changed in this episode, but the circumstances created by King Graham's situation makes this episode feel very different from the first. The majority of your time is still spent solving puzzles, but there is an added air of urgency created by the starving and sometimes ill townspeople in the dungeon. At times, depending on your actions, you must make very difficult choices about who to help. In one particular instance, just after finding a solution to a puzzle, I realized I had figured it out one day too late to save one of the townspeople.

The chapter features a health mechanic based around keeping the townspeople well fed during their stay in the goblin dungeon. Each day, Graham is given some food and you must choose how to disseminate it. Lacking some strength himself, you can feed it to Graham or any of the townspeople to help them out. A poor choice is easy to make in this episode, which made me really wish there was a better way to go back and try different options. King's Quest allows you to do little other than switch save slots, so if you make a mistake far into the chapter, you'll either have to start again from the beginning or just live with your decisions.

A little shorter than the previous episode, Rubble Without a Cause trades the big story beats for higher replayability. Having finished my first run, I immediately started again in an attempt to try to save all of my loyal townspeople. I was also impressed that, in spite of nearly the entire episode taking place in a dungeon, they still manage to include a fair amount of variety in the different areas. In contrast to the first episode, I was a little disappointed to see less variety in the responses you can get by talking to people multiple times. Either way, the writing is still spot on and there is plenty of humor to go around even in the bleak situation it puts you in.

Shaking up the King's Quest formula set forth by the first episode was a bold move that payed off. Rubble Without a Cause is a darker second chapter that plays off the relationships made before and uses an interesting gameplay mechanic to add a sense of urgency. If this is an indication of the level of quality that will be kept up throughout the entire collection, King's Quest fans have a lot to look forward to coming up. Check out King's Quest now for the PS4, PS3, Xbox One, Xbox 360 and PC.