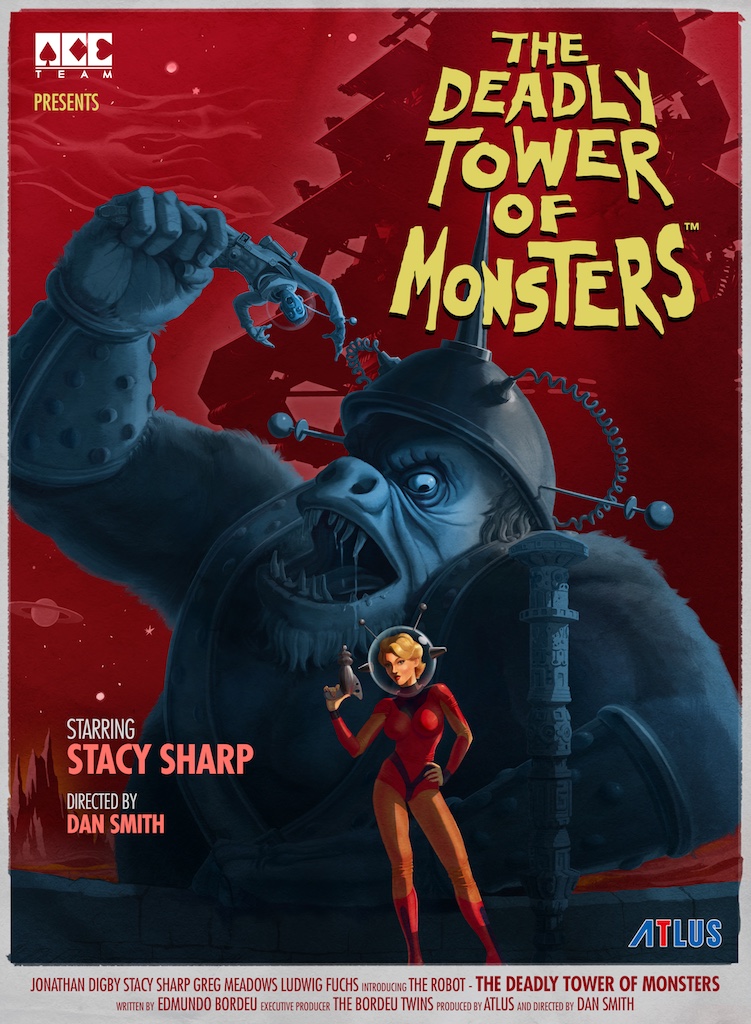 As a kid I loved watching Mystery Science Theater 3000, and being a lifelong MSTie I recently donated to its Kickstarter revival. As Tom Servo, Crow, and Gypsy are currently in the midst of a tuneup there's no telling when these new episodes will turn up. Until then there are various alternatives the MSTies can fill their bad movie space with, be it watching old MST3K reruns, checking out some RiffTrax, or even picking a selection from the awesomely bad library of films from Vinegar Syndrome and laughing along with some friends.

There is -- however -- one new beacon of cheesy goodness that has just invaded the PS4 and PC from the folks over at The ACE Team (Rock of Ages, Abyss Odyssey): an interactive piece of b-movie science fiction that has been titled The Deadly Tower of Monsters. Trust me: you'll want to grab some popcorn for this one. 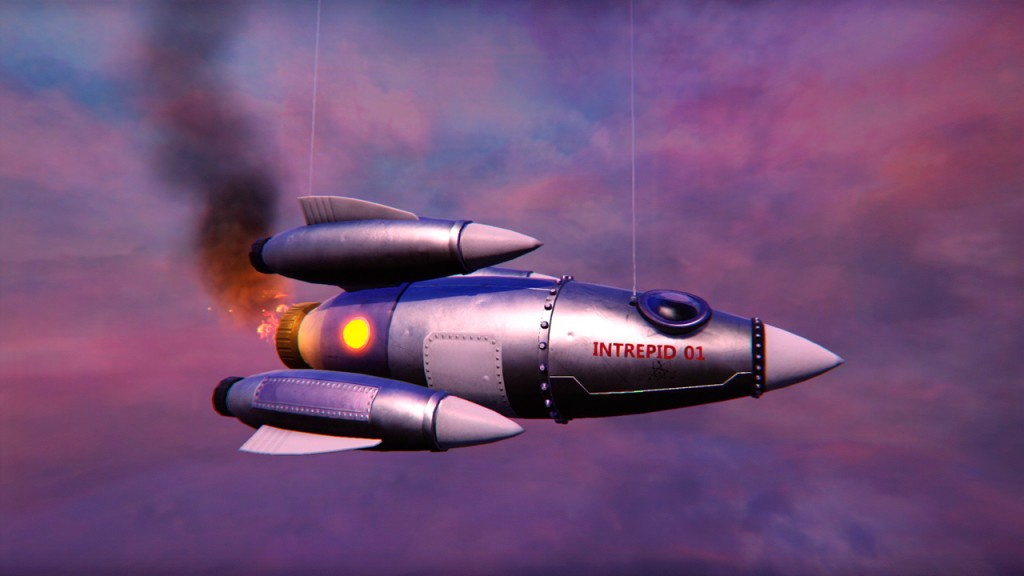 The Deadly Tower of Monsters has you take control of a sci-fi schlock film, as its director Dan Smith offers audio commentary with back stories of horror, shock, and things that would make any union head shake their head in disgust. Our hero Dick Speedstar crash-lands on the planet Gravonia, declaring that he has come in peace to the people of the planet as he points a laser gun their way. He runs into Scarlet Nova, the daughter of the evil Emperor, and the two make a plan to defeat the ruler by any means necessary.

On the planet of Gravonia, the phrase "any means necessary" means beating the living crap out of stop-motion dinosaurs, dudes in monkey costumes, and giant animatronic apes and octopi. As you fight them you'll collect gold and gears, which can be used to upgrade your weapons and turn them into some fine death machines worthy enough of any science fiction adventure. As Dan Smith commentates and argues with Patrick the audio director of the commentary, the on-screen horrors become all the more zanier. Monsters with zippers on their backs, monkeys with hollowed-out eyes, and spaceships with not-so-invisible strings holding them up in flight. 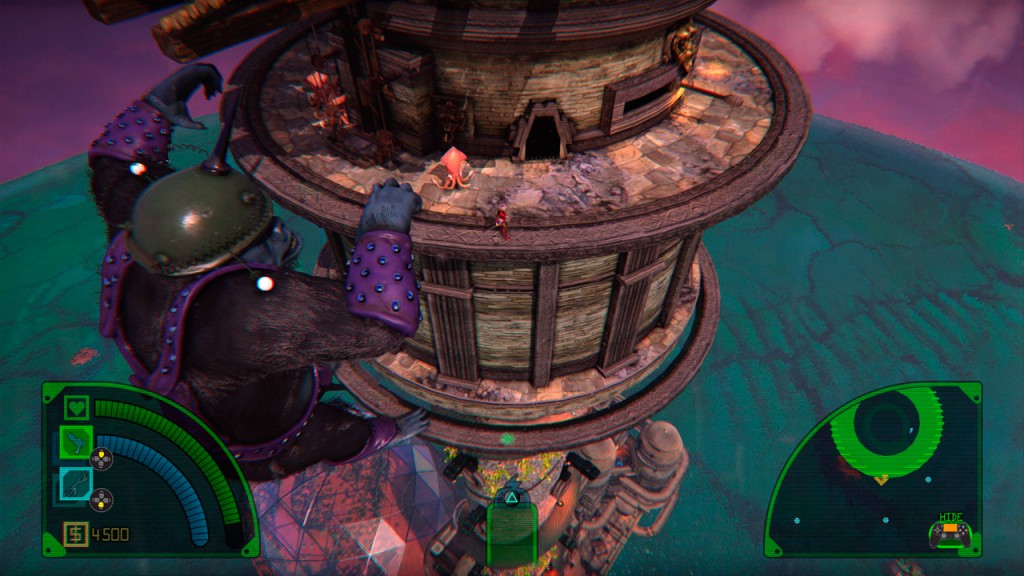 It's this mentality that makes The Deadly Tower of Monsters a joy to experience. We've all experienced some pretty bad films, whether it's with the help of Joel/Mike, one of SyFy's films about sharks in a tornado, or via a random Netflix movie viewing. To be given the chance to play a bad movie as it progresses whilst the director defends its "artistic integrity," this is a rarity for someone to experience. In fact I don't think anyone has ever attempted such a thing in a video game, so big props to The ACE Team for giving us an original take on the beat-'em-up adventure genre.

Despite its wonderful presentation, the game does suffer from some flaws. You'll be beating up creatures practically nonstop, with very little brain power needed to figure out how to come about getting from one place to another. You just smack things around and move onto the next area of the game. The only time a challenge came my way was during a boss battle, and even then it was just timing your hits and dodges properly. 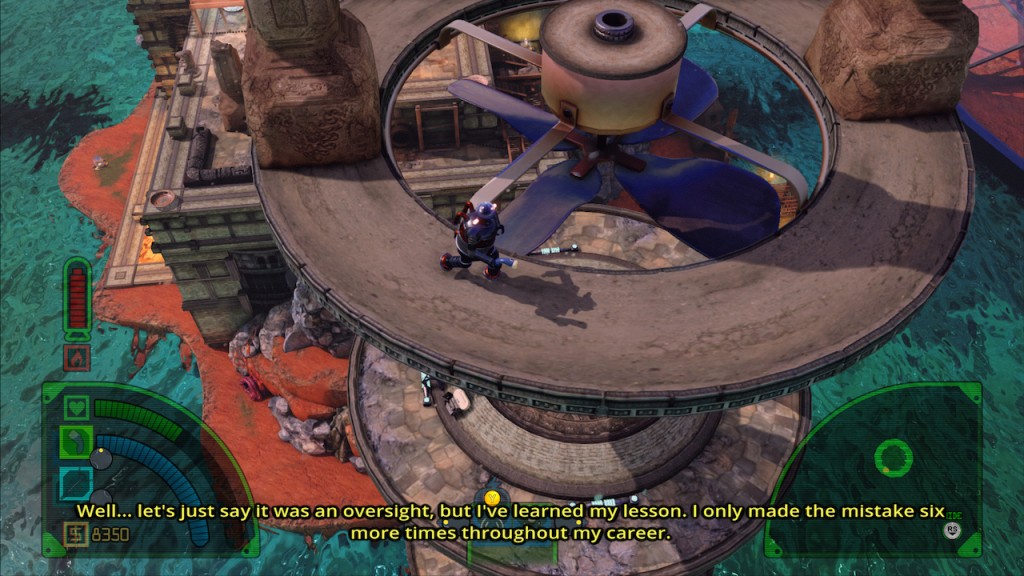 The good news is, despite constantly killing off costumed extras, the controls are very easy to handle. Aiming with the right control stick and changing your weapons with the D-pad, jumping into a fight will have you in a constant advantage against pterodactyls and slave men. A bonus ace up the sleeve, be it a bomb or protective force field, can be activated with at the press of a button.

Graphically the human characters can look rather last-gen, but it's the awfully goodness that comes in the form of the enemies and worlds that surround Dick, Scarlet, and ROBOT that make The Deadly Tower of Monsters a treat to watch unfold. The developers got the look and feel of stop-motion creations down with a very Harryhausen glimmer of warmth put into it, whereas the planet of Gravonia has a plastic-y style that makes it seem like the movie was made a very minor budget. (Its director makes mention of having to reuse props and steal sets from other films to make the film work during his commentary.) One of the cool things you can also do is experience the game via a VHS filter, giving it that look and sound of a film that's been rented many times from a local Blockbuster. In my opinion, this is the true way to experience this video game. 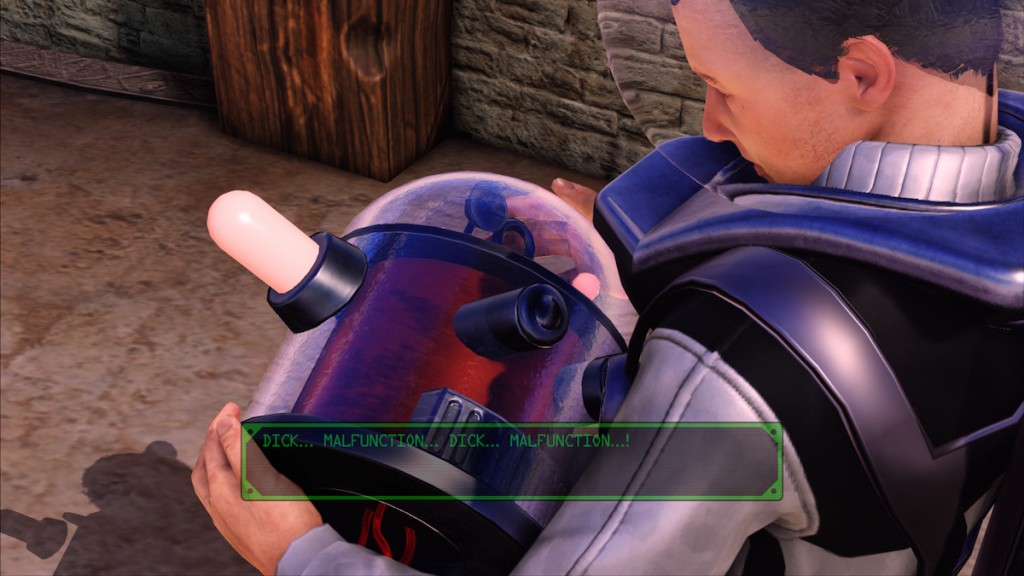 It's also fun hearing the game's voice actors do the opposite of what they're usually paid to do, as they ham up their performances and deliver lines as if they're just reading them from some off-screen cue cards. As the game happens, director Dan Smith both praises and pans his cast and crew for being both troopers whilst acting horribly. I don't wanna spoil much, but the tales he tells about the film's making-of aspect will have you laughing your head off in many places.

A run-through of The Deadly Tower of Monsters will take you five hours to complete. While there are hidden film strips to discover throughout the game there really isn't much to return to once the game's end credits roll. It's a short gameplay experience, but as it's trying to emulate a movie perhaps that can be forgiven.

The Deadly Tower of Monsters is one loony b-movie game worthy of the drive inn experience. Despite its repetitive gameplay and minor challenges, The ACE Team has crafted a good jab to bad movie makers all across the world. Simply put: this is one game I'm sure would be a perfect candidate to send up to the Satellite of Love.